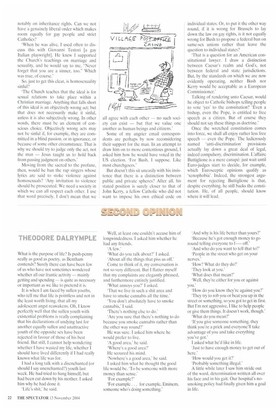 What is the purpose of life? Is push-penny really as good as poetry. as Bentham contends? Surely there can have been few of us who have not sometimes wondered whether all our frantic activity — mainly getting and spending — is quite as necessary or important as we like to pretend it is.

It is when I am faced by sullen youths, who tell me that life is pointless and not in the least worth living, that all my adolescent angst reawakens. Oh, I know perfectly well that the sullen youth with existential problems is really complaining that his declarations of undying lust for another equally sullen and unattractive youth of the opposite sex have been rejected in favour of those of his best friend. But still, I cannot help wondering whether I have wasted my life, whether should have lived differently if I had really known what life was for.

I had a long talk with a disenchanted (or should I say unenchanted?) youth last week. He had tried to hang himself, but had been cut down by his mother. I asked him why he had done it.

'Life's shit,' he said. Well, at least one couldn't accuse him of longwindedness. I asked him whether he had any friends.

'What do you talk about?' I asked. 'About all the things that piss us off.' Come to think of it, my conversation is not so very different. But I flatter myself that my complaints are elegantly phrased, and furthermore entirely justified. 'What annoys you?' I asked.

That we live in such a shit area and have to smoke cannabis all the time.'

You don't absolutely have to smoke cannabis,' [said.

'There's nothing else to do.'

'Are you sure that there's nothing to do because you smoke cannabis rather than the other way round?'

He was sure. [asked him where he would prefer to live.

He scoured his mind.

Nowhere's a good area,' he said.

I asked him what he thought the good life would be. 'To be someone with more money than sense.'

Tor example . .. for example, Eminem, someone who's doing something.' 'And why is his life better than yours'?' 'Because he's got enough money to go round telling everyone to f— off.'

'And who do you want to tell that to?' 'People in the street who get on your nerves.'

They look at you.'

'What does that mean?'

'Well, they're either for you or against you.'

'How do you know they're against you?'

They try to rob you or beat you up in the street or something, so you got to get in first. But I'm not aggressive, I like to help people or give them things. It doesn't work, though.'

'If you give someone something, they think you're a prick and everyone'll take advantage of you and take everything you've got.'

'Just to have enough money to get out of here.'

A little while later I saw him stride out of the ward, determination written all over his face and in his gait. Our hospital's nosmoking policy had finally given him a goal in life.