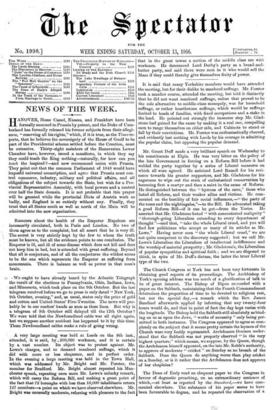 Page 1, 13 October 1866 — It is said that many Yorkshire members would have attended
Close

It is said that many Yorkshire members would have attended

the meeting, but for their dislike to manhood suffrage. Mr. Forster took a manlier course, attended the meeting, but told it distinctly that he did not want manhood suffrage, unless that proved to be the sole alternative to middle-class monopoly, was for household suffrage, or rather hearthstone suffrage, which would be suffrage limited to heads of families, with fixed occupations and a stake in the land. He pointed out strongly the immense step Mr. Glad- stone had gained for the cause by making it a real one, compelling men to range themselves on either side, and Cabinets to stand or fall by their convictions. Mr. Forster was enthusiastically cheered, and evidently lost nothing with Leeds by his courage in admitting the popular claim, but opposing the popular demand.