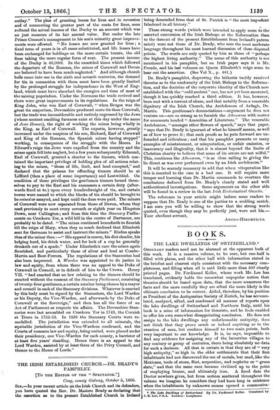 Page 15, 13 October 1866 — THE IRISH ESTABLISHED CHURCH.—DR BRADY'S PAMPHLET [To THE EDITOR OF
Close

THE IRISH ESTABLISHED CHURCH.—DR BRADY'S PAMPHLET [To THE EDITOR OF

THE " SPECTATOR."] Cong, county Galway, October 5, 1866. SIB,—In your recent article on the Irish Church and its defenders, you have quoted the Rev. Dr. Maziere Brady as declaring that the assertion as to the present Established Church in Ireland

being descended from that of St. Patrick is " the most impudent falsehood in all history."

These strong words (which were intended to apply more to the asserted conversion of the Irish Bishops at the Reformation than to the descent of the present Establishment from Ireland's patron saint) were not those of Dr. Brady, who uses the most moderate language throughout his most learned discussion of these disputed points. The words are only quoted by him as those of "perhaps the highest living authority." The name of this authority is not mentioned in his pamphlet, but an Irish paper says it is Mr. Froude, and his last volumes on Queen Elizabeth's reign seem to bear out the assertion. (See Vol X., p. 481.) Dr. Brady's pamphlet, disproving the hitherto tacitly received theories as to the conformity of the Irish Bishops to the Reforma- tion, and the doctrine of the corporate identity of the Church now established with the " ould ancient" one, has not yet been answered, though it has quickly reached a third edition. It has, however, been met with a torrent of abuse, and that notably from a venerable dignitary of the Irish Church, the Archdeacon of Ardagh, Dr. Martin. This gentleman's denunciations —argument he does not venture on—are so strong as to furnish the Athenmum with matter for comments headed " Amenities of Literature." The venerable Archdeacon, "amongst other'flowers of speech," says that paper, "says that Dr. Brady is ignorant of what he-himself means, as well as of how to prove it ; that such proofs as he puts forward are un- founded and ridiculous ; and that his pamphlet presents so many examples of misstatement, or misquotation, or unfair omission, or inaccuracy and illogicality, that it is almost beyond the limits of Christian charity to believe that some of its errors are not wilful." This, continues the Athenwum, "is as close sailing to giving the lie direct as was ever performed even by an Irish archdeacon."

It will be scarcely necessary to add that when vituperation like this is resorted to the case is a bad one. It will require more temper and learning than Dr. Martin commands to overturn the conclusions deduced from Dr. Brady's clearly stated and well authenticated investigations. Some arguments on the other side will be found in a review in the last Irish Ecclesiastical Gazette.

The reference in your article might induce some readers to suppose that Dr. Brady is one of the parties to a scolding match. I am sure you will be willing to show that the strong words quoted, even though they may be perfectly just, were not his.— Your obedient servant,