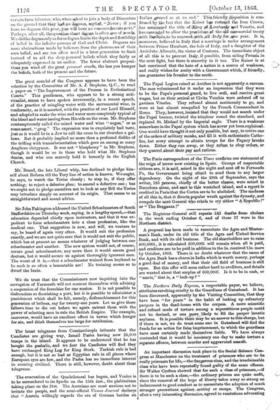 Page 2, 13 October 1866 — The evacuation of the Quadrilateral has begun, and Venice is
Close

The evacuation of the Quadrilateral has begun, and Venice is

to be surrendered to its Syndic on the 15th inst., the plebiscitwn taking place on the 21st. The Austrians are most anxious not to irritate the people, and the semi-official Vienna Journal declares that " Austria willingly regards the era of German battles on Italian „Foetid as at an end." Thie.friendlyAisposition is con- firmed lay,t4e fact that the Kaiser hp restored the Iron Crown, has rencewsed the title of :ging gf gi..ombaqk epd Venetia, and has epusopitod to allow the proarisiogs gf tbe.old commercial treaty with Sardipiato be renewedApith 0.11 Ital.p.for Aene year. It is, moreover, believed in Italy that a marriage is under arrangement between Prince Humbert, the heir of Italy, and a daughter of the Archduke Albrecht, the victor of Custozza. The immediate object of all this is to prevent 1ta1y, if possible, from aidingTrussia in the next fight,-but there is sincerity in it too. The Kaiser is at last convinced that the hate of a nation is a source of weakness, and really wishes for amity with a,Governinent which, if friendly, can guarantee his frontier to the south.