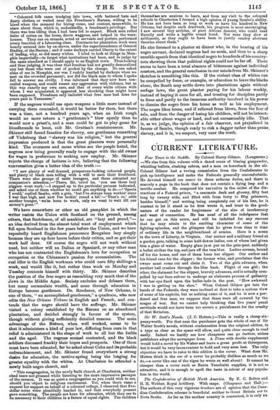 cheap six- pennyworth. For that sum the purchaser gets the whole of one of Sir Walter Scott's novels, without condensation from the original edition, in a type as clear as the space will allow, and quite clear enough to read easily. Indeed we hardly see how cheapness can go further, unless publishers adopt the newspaper form. A Times with double supplement would hold a novel by Sir Walter and leave a great profit at threepence, but it would be very inconvenient to hold and very soon lost. The only objection we have to raise to this edition is the cover. What does Mr. Rotten think is the use of a cover he probably dislikes as much as we do,—a cover like one of the signs he wrote so well about? It cannot be cheaper than a cover such as Baron Tauchnitz supplies, it is not so attractive, and it is enough to spoil the taste in colour of any popula- tion in the world.