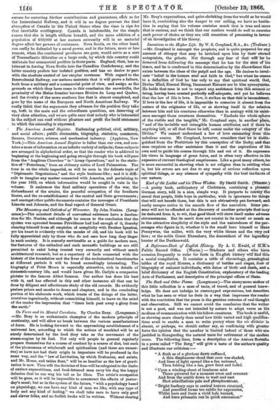 On Force and its Mental Correlates. By Charles Bray. (Longman:)

--Mr. Bray is an enthusiastic champion of the modern principle of continuity, and will allow no break between the various manifestations of force. He is looking forward to the approaching establishment of a universal law, according to which the actions of mankind will be as surely determined by the food they take as the movement of the steam-engine by its fuel. Not only will people in general regularly prepare themselves for a course of conduct by a course of diet, but such of the phenomena of witchcraft and spiritualism (and these are tinnier- ous) as have not had their origin in imposture will be produced in the same way, and the " law of Levitation, by which Brahmins, and saints, and Mr. Home, and tables float," will be as familiar as the law of gravi- tation is now. Then will the doctrine of free-will be relegated to the limbo of extinct superstitions, and food-fettered man envy his dog the happy delusion that he can wag his tail as he likes. The critic's occupation will be gone, as it will be impossible to counteract the effects of yester- day's meal; but as in the system of the future, " with a psychology based on physiology, we can have any kind of men we like, with any type of body and any kind of feeling," we shall take care to have only good and clever folks, and no foolish books will be written. Without sharing Mr. Bray's expectations, and quite shrinking from the world as he would have it, overlooking also the danger to our calling, we have no hesita- tion in saying that his volume contains much that is true and more that is curious, and we think that our readers would do well to exercise such power of choice as they are still conscious of possessing in favour of an investigation of his theory.