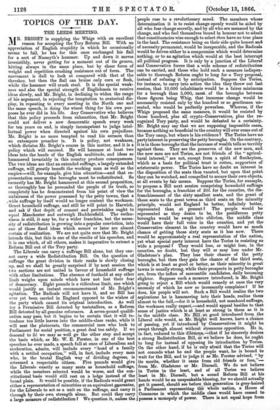 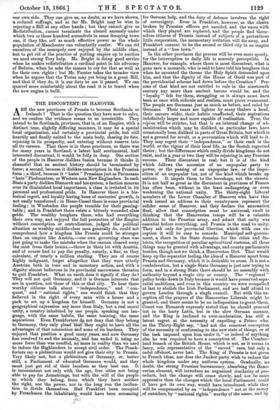 It JR. BRIGHT is supplying the Whigs with an excellent 1T.1 reason for accepting the Tory Reform Bill. With an appreciation of English stupidity in which he occasionally seems to fail, he has for this once exchanged his flail for a sort of Nasmyth's hammer. Up and down it moves irresistibly, never getting for a moment out of its groove, hitting always in the same place, but by sheer force of weight and repetition crushing resistance out of form. The movement is dull to look at compared with that of the thresher, but then the flail can bruise only corn or flesh, while the hammer will crush steel. It is the special weak- ness and also the special strength of Englishmen to receive ideas slowly, and Mr. Bright, in declining to widen the range of his argument, in rejecting the temptation to oratorical dis- play, in repeating to every meeting in the North one and the same speech, is doing the wisest thing for his own pur- poses he ever did in his life. Any Conservative who believes that this policy proceeds from exhaustion, that Mr. Bright could not deliver a new democratic speech every week for ten years on end, is simply incompetent to judge intel- lectual power when directed against his own prejudices. Mr. Bright is no more tempted to read his sermon than an extempore preacher is. It is policy, not weakness, which dictates Mr. Bright's course in this matter, and it is a policy which will succeed. He will hammer at least two ideas into the heads of the English multitude, and ideas so hammered invariably in this country produce consequences. The two ideas are that an extended suffrage, a largely extended suffrage, will greatly benefit the working man as well as the empire—will, for example, give him education—and that re- presentation among the boroughs must be redistributed. So earnestly has Mr. Bright hammered at this second proposition, so thoroughly has he persuaded the people of its truth, so completely has he demonstrated from his point of view the unfairness of the power possessed by the petty towns, that a . wide suffrage by itself would no longer content the workmen. Grant household suffrage, and still he will point to Harwich, and ask if that depot of cement and periwinkles ought to equal Manchester and outweigh Huddersfield. The enthu- siasm is still, it may be, for a wider franchise, but the neces- sity of redistribution is growing into a popular conviction, into one of those fixed ideas which sooner or later are almost certain of realization. We are not quite sure that Mr. Bright intends this, but this is one of the results of his speeches, and it is one which, of all others, makes it imperative to extract a Reform Bill out of the Tory party.

our own side. They can give us, no doubt, as we have shown, reduced suffrage, and so far Mr. Bright may be wise in rejecting a Bill at any other hands ; but they cannot give us Redistribution, cannot terminate the absurd anomaly under which two or three hundred scoundrels in some decaying town can, if they like, sell as much effective power as the whole population of Manchester can voluntarily confer. We can rid -ourselves of the monopoly now enjoyed by the middle class, but to get rid of the practice of putting empire up to auction we need strong Tory help. Mr. Bright is doing good service when he makes redistribution a cardinal point in his advocacy of Reform, when he asks the masses to cry for that as well as for their own rights ; but Mr. Forster takes the broader view when he argues that the Tories may yet bring in a great Bill, and that if they do, it is our duty to see it passed. We can quarrel more comfortably about the road it is to travel when the new engine is built.