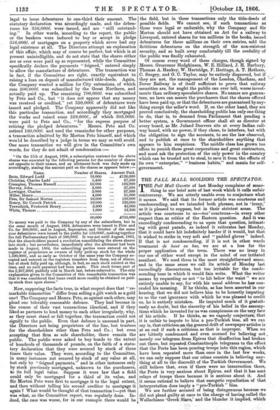 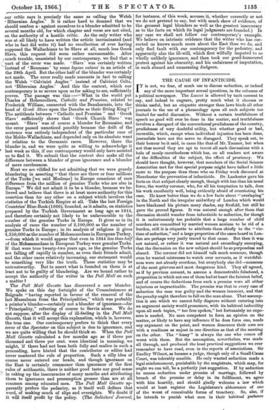 of last Monday complains of some- thing in our brief note of last week which it calls unfair controversy. We are utterly unable even to conjecture what it means. We said that its former article was courteous and condescending, and we intended both phrases, not in irony,' as it is pleased to suppose, but in their strictest sense. The article was courteous to us—too' courteous—in every other respect than as critics of the Eastern question. And it was exceedingly condescending to us upon that question, intimat- ing with great parade, as indeed it reiterates last Monday, that it could have hit indefinitely harder if it wonld, but that it wished to strike in very soft and " padded gloves " indeed. If that is not condescending, if it is not in other words treatment de haut en bas, we are at a loss for the proper application of the term. There was no irony in our use of either word except in the mind of our irritated assailant. We used them in the most straightforward sense, and in the same sense we call its article of Monday last exceedingly discourteous, but too irritable for the conde- scending tone in which it would fain write. What the writer , means by requesting us not " to hit below the waist " we are entirely unable to say, for with his usual address he hag-con- cealed his meaning. If he thinks, as has been asserted in our hearing, that we did not believe him to be honestly imputing to us the vast ignorance with which he was pleased to credit us, he is entirely mistaken. He imputed much of it gratuit- ously no doubt, but the sincerity of his belief in the assump- tions which he invented for us was conspicuous on the very face of his article. If he thinks, as we vaguely conjecture, that it is unfair to impute to him a pro-Turkish bias, all we can say is, that criticism.okthe.general drift of newspaper articles is at an end if such a criticism as that is improper. When we are bitterly condemned and even scorned for believing not merely one telegram from Epirus that disaffection had broken out there, but repeated Constantinople telegrams to the effect that the Porte has been 'pouring troops into this region, which have been repeated more than once in the last few weeks, we can only suppose that our crime consists in believing any- thing at all to the discredit of the Turkish Government. We still believe that, even if there were no insurrection there, the Porte is very anxious about Epirus, and that it has sent relays of troops there because it is anxious about it. And it seems rational to believe that energetic repudiation of that interpretation does imply. a " pro-Turkish " bias.

We are further accused of being disingenuous because we did not plead guilty at once to the charge of having called the Wallachians 'Greek Shwa,' and the blunder it implied, which our critic says is precisely the same as calling the Welsh Hibernian Angles.' It is rather hard to demand that we should confess a; against ourselves to a blunder admitted to be several months old, for which chapter and verse are not cited, on the authority of a hostile critic. As the only writer who was at all likely to have written the article incriminated (and who in fact did write it) had no recollection of ever having supposed the Wallachians to be Slays at all, much less Greek Slays, this request did seem rather unreasonable. After much trouble, unassisted by our contemporary, we find that a impart of the error was made. Slays' was certainly written instead of Ronmans ' by some lapses calami in an article of the 28th April. But the other half of the blunder was certainly not made. The error really made amounts in fact to calling the Welsh "Calvinist Angles " .instead, of Calvinist Celts, not 'Hibernian Angles.' And this the context, which our contemporary is so severe upon us for asking to see, sufficiently proves. The passage was this :—" What in the world put Charles of Hohenzollern, Catholic and Prussian, related to Frederick William, connected with the Beauharnais, into the head of Greek Slays upon the Danube as their fitting King ?" The antithesis between " Catholic and Prussian " and Greek Slays' sufficiently shows that Greek Church Slays' was meant. ' Slays ' was of course a blunder for Roumains, and the error passed unnoticed possibly because the drift of the sentence was entirely independent of the particular race of the Moldo-Wallachians, and depended only on its absolute want of relation to the Germanic races. However, there the blunder is, and we were quite as willing to acknowledge it ' last week as this, if our contemporary would only have assisted us to find it. We submit that the context does make all the difference between a blunder of gross ignorance and a blunder of mere carelessness.

Next we are vilified for not admitting that we were grossly blundering in asserting " that there are three or four millions of the Turks [we said Moslems] in Europe conscious of race difference from the million of genuine Turks who are also in Europe." We did not admit it to be a blunder, because we be- lieved and believe that there is at least more authority for this assertion than for any other on a subject which involves the statistics of the Turkish Empire at all. Take the last Foreign Countries' Blue-Book (1866), founded, as it admits, on statistics prepared by the • Turkish Government as long ago as 1844, and therefore certainly not likely to be unfavourable to the number of the genuine Turks in Europe. It gives us in its analysis of races the number of 2,100,000 as the number of genuine Turks in Europe ; in its analysis of religions it gives 4,550,000 as the number of Mohammedans in European Turkey, —from which it would appear that even in 1844 less than half of the Mohammedans in European Turkey were genuine Turks. If that were true twenty-two years ago, as the genuine Turks are falling off rapidly in number, as even their friends admit, and the other races relatively increasing, our statement would be something very like the truth. These statistics may be untrustworthy. But to assert what is founded on them is at least not to be guilty of blundering. Are we bound rather to accept the authority of the writer in the Pall Mall on such a matter I

The Pall Mall Gazette has discovered a new blunder. We spoke on this day fortnight of the Commissioners at Belgrade " having reported in favour of the removal of the last Mussulman from the Principalities," which was probably a printer's blunder—certainly not a blunder of ignorance—for "Principality," referring of course to Servia alone. We do not suppose, after the display of ill feeling in the Pall Mall Gazette, that it will accept this explanation, which is, however, the true one. Our contemporary prefers to think that every error of the Spectator on this subject is due to ignorance, and we are quite willing that he should think 'so. When the Pall Mall Gazette calculated a few month% ago as if three per thousand and three per cant. were identical in meaning, we might, if there had not been both folly and malice in such a proceeding, have hinted that the contributor or editor had never mastered the rule of proportion. Such a silly idea of course never entered our heads, and though ignorance on the East is certainly commoner than ignorance of the first rules of arithmetic, there is neither good taste nor good sense in raking up the inaccuracies of many months and attributing them to ignorance and presumption grosser than are at all common among educated men. The Pall Mall Gazette ap- parently prefers the pedantry, as it itself well defines that word, of making much of slips and oversights. We doubt if it will itself profit by the policy. (The Solicitors' Journal,

for instance, of this week, accuses it, whether correctly or not we do not pretend to say, but with much show of evidence, of the grossest legal blunders as well as the greatest inaccuracy as to the facts on which its legal judgments are founded.) In any case we shall not follow our contemporary's example. We believe on intrinsic evidence that the writer who has cor- rected us knows much more about the East than we do, and only find fault with our contemporary for the pedantry, and apparently also the ill-will, which first wilfully imputed to us wholly unlikely ignorance, and then took our good-humoured protest against his obscurity, and his unfairness of imputation, in such absurd and unmeaning dudgeon.