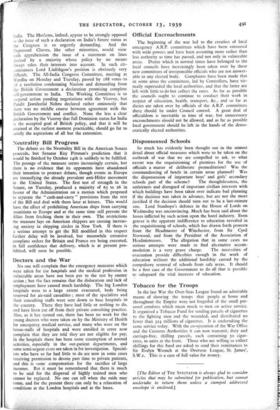 Tobacco for the Troops

In the last War the Over-Seas League found an admirable means of showing the troops that people at home and throughout the Empire were not forgetful of the small per- sonal comforts which mean much to men on active service. It organised a Tobacco Fund for sending parcels of cigarettes to the fighting men and the wounded, and distributed no fewer than 324 millions of cigarettes. It is undertaking the same service today. With the co-operation of the War Office and the Customs Authorities it can now transmit, duty and carriage-free, shilling parcels, each containing 5o cigar- ettes, to units at the front. Those who are willing to collect shillings for this fund are asked to send their remittances to Sir Evelyn Wrench at the Overseas League, St. James', S.W.x. This is a case of full value for money.