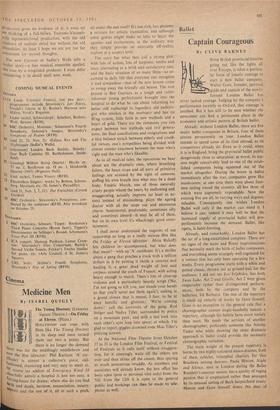 By ISABEL QUIGLY The Young Doctors. (Leicester Square Theatre.)—On Friday at Eleven. (Plaza.) HOLLYWOOD can cope with films like The Young Doctors 0 E. in its sleep and once turned them out two a penny. But there is no longer the demand there was for the middlingly middlebrow and 110W the film (director: Phil Karlson; 'A' cer- tificate) is almost a collector's piece, old- Oshioned, reassuring and very easy to sneer at. f course (as addicts of Emergency Ward 10 cheerfully admit) a hospital is just too easy, a forcing-house for drama; where else do you find birth and death, heroism, renunciation, misery, IIIPEtire and the rest of it, all at such a pitch, all under the one roof? It's too rich, too plummy a mixture for artistic translation, and although some genius might make us take to heart the agonies and excitements, in the ordinary way they simply provide an enjoyable off-reality, realism at a suspect level.

The story has what they call a strong plot, with lots of action, lots of suspense, smiles and tears alternating at a brisk and satisfactory rate, and the basic situation of so many films—so re- current in daily life that everyone can recognise it and sympathise—that of the new broom come to sweep away the friendly old besom. The new broom is Ben Gazzara as a tough and rather inhuman young perfectionist brought into the hospital to do what he can about reforming (or better still replacing) its legendary old patholo- gist who smokes in the mortuary and has no filing system, little faith in new methods and a heart of gold. There are the rumpuses you can expect between two tr.6thods and two genera- tions, the final conciliations and resignations and a nice balance struck between elderly and youth- ful virtues, one's sympathies being divided with almost sinister exactness between the man who's right and the man who's likeable.

As in all medical tales, the operations we hear about are the dramatic ones, where breathing falters, the heart stops and all sorts of primitive feelings are aroused by the sight of someone puffing his own breath into what may be a dead body. Fredric March, one of those naturally crusty people whom the years, by mellowing and exaggerating, actually improve (at least as ac- tors) instead of diminishing, plays the ageing doctor with all the stops out and enormous charm. Sentimental, predictable, sometimes silly and sometimes absurd—it may be all of these, but on its own level it's whackingly good enter- tainment.

shall never understand the vagaries of our censorship so long as a really vicious film like On Friday at Eleven (director: Alvin Rakoff) lets children in—accompanied, but what does that mean?—with an 'A' certificate. It's a thriller about a gang that pinches a truck with a million dollars in it by putting it inside a caravan and hauling it, a great dead weight of loot and corpses, around the south of France; with acting heavy enough to match. There's lots of close-up violence and a particularly beastly script ('No, I'm not going to kill you, just smash your hands so that you'll never use them again'), ending in a grand climax that is meant, I fear, to be at once horrific and glorious: 'We're coming down!' yell the survivors of the gang, Rod Steiger and Nadya Tiller, surrounded by police on a mountain peak, and with a last look into each other's eyes leap into space; at which, I'm glad to report, giggles drowned even Miss Tiller's piercing scream.

At the National Film Theatre from October 17 to 31 is the London Film Festival, or Festival of Festivals as it calls itself without exaggera- tion, for it cunningly waits till the others are over and then skims off the cream, thus sparing us much pretentious twaddle. As members and associates will already know, the box office has been open (post or personal visit only) from the 5th; from the 12th it is open to the general public and bookings can then be made by tele- phone as well.