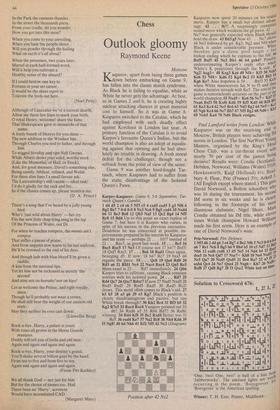 Kasparov, apart from being three games down before embarking on Game 9, has fallen into the classic match syndrome. As Black he is failing to equalise, while as White he never gets the advantage. At best, as in Games 2 and 6, he is creating highly unclear attacking chances at great material cost to himself. So it was in Game 8. Kasparov switched to the Catalan, which he had employed with such deadly effect against Korchnoi in London last year. A primary function of the Catalan is to avoid Karpov's favourite Queen's Indian, but the world champion is also an adept at equalis- ing against that opening and he had abso- lutely no trouble in drawing. A fresh moral defeat for the challenger, though not a setback from the point of view of the score.

Game 9 was another hard-fought Tar- rasch, where Kasparov had to suffer from the static disadvantage of the Isolated Queen's Pawn.

bury 4; Flear, Prie (France) 31/2; Arkell 3' (All English except where stated.) This gave David Norwood, a Bolton schoolboy Wh°, was 16 during the tournament, his seconu IM norm in six weeks and he is clearlY following in the footsteps of his 111()ce illustrious clubmate, Nigel Short. Mat' Condie obtained his IM title, while eleven

times Welsh champion Howard made his first norm. Here is an example ° one of David Norwood's wins: