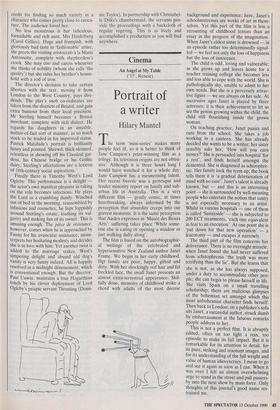 Portrait of a writer

The term 'mini-series' makes many people feel ill, so it is better to think of Jane Campion's prize-winning film as a trilogy. Its television origins are not obtru- sive. Although it is three hours long I would have watched it for a whole day; Jane Campion has a mesmerising talent. Her recent Sweetie was a grotesque and tender minority report on family and sub- urban life in Australia. This is a very different film — gently comic, at times heartbreaking, always informed by the perception that absurdity creeps into our gravest moments. It is the same perception that Auden expresses in `Musee des Beaux Arts': suffering takes place 'While some- one else is eating or opening a window or just walking dully along'.

The film is based on the autobiographic- al writings of the celebrated and hypersensitive New Zealand author Janet Frame. We begin in her early childhood. Her family are poor, happy, gifted and dirty. With her shockingly red hair and fat freckled face, the small Janet presents an almost extra-terrestrial appearance. Skil- fully done, memoirs of childhood strike a chord with adults of the most diverse background and experience; here, Janet's schoolmistresses are works of art in them- selves. Yet this part of the film is less a recounting of childhood terrors than an essay in the progress of the imagination. When Janet's eldest sister is drowned — in an episode rather too determinedly signal- led — we feel not only the loss of happiness but the loss of innocence.

The child is odd, loving and vulnerable; as she grows up and leaves home for a teacher training college she becomes less and less able to cope with the world. She is pathologically shy, unable to admit to her own needs. But she is a perversely attrac- tive figure — we are always on her side. At successive ages Janet is played by three actresses; it is their achievement to let us see the genius growing within the child, the child still flourishing inside the grown woman.

On teaching practice, Janet panics and runs from the school. She takes a job working in a canteen. She has already decided she wants to be a writer; her sister sensibly asks her, 'How will you earn money?' She is persuaded into hospital 'for a rest', and finds herself amongst the demented. She is diagnosed as schizophre- nic. Her family look the term up; the book tells them it is 'a gradual deterioration of mind with no cure'. Janet's talent is already known, but — and this is an interesting point — she is surrounded by well-meaning people who entertain the notion that sanity is not especially necessary to an artist. Whilst in various hospitals — one of them is called `Sunnyside' — she is subjected to 200 ECT treatments, 'each one equivalent in fear to an execution'. At one point she is `put down for that new operation' — a leticotom y — and escapes it narrowly. The third part of the film concerns her deliverance. There is no overnight miracle; when Janet found she had never suffered from schizophrenia 'the truth was more terrifying than the lie'. But she learns that

she is not, as she has always supposed, under a duty to accommodate other peo- ple; she can begin to please herself in life. She, visits Spain on a small travelling scholarship; there are malicious glimpses of the bohemian set amongst which this most unbohemian character finds herself. Then back to London; on a publisher's sofa sits Janet, a successful author, struck dumb by embarrassment at the fatuous remarks people address to her.

This is not a perfect film. It is abruptly edited, often on too tight a rein, too episodic to make its full impact. But it is remarkable for its attention to detail, for its pure, striking and resonant images, and for its understanding of the full weight and value of human idiosyncracy. I mean to go and see it again as soon as I can. When it was over I felt an almost overwhelming urge to stand in the street and pull passers- by into the next show by main force. Only thoughts of this journal's good name res- trained me.