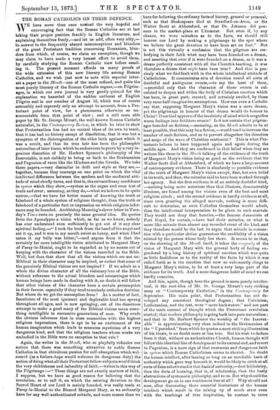 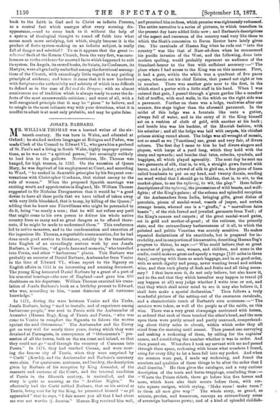 THE ROMAN CATHOLICS ON THEIR DEFENCE.

WE have more than once noticed the very hopeful and encouraging fact that the Roman Catholics are at last taking their proper position frankly in English literature, and explaining themselves freely,—and let us add, often very ably,— in answer to the frequently absurd misconceptions and blunders of the great Protestant tradition concerning Romanism, blun- ders from which, of course, we claim no exemption, though we may claim to have made a very honest effort to avoid them, by carefully studying the Roman Catholic view before assail- ing it. The present moment affords us many proofs of the wide extension of this new literary life among Roman Catholics, and we wish just now to note with especial inter- est a paper in the Month—one of the most refined, and quite the most purely literary of the Roman Catholic organs,—on Pilgrim- ages, in which our own journal is very gently quizzed for the explanation we hazarded of the sudden outburst of English Pilgrim zeal in our number of August 16, which was of course ostensibly and expressly only an attempt to account, from a Pro- testant point of view, for a phenomena otherwise so un- accountable from that point of view ; and a still more able paper by Mr. St. George Mivart, the well-known Roman Catholic naturalist, in the Contemporary Review, in which he tries to show that Protestantism has had no central ideas of its own to teach, that it has had no history except of dissolution, that it was but a symptom of the disintegration of the older faith against which it was a revolt, and that its true heir has been the philosophic naturalism of later times, which he endeavours to prove by a very in- genious dissection of Mr. Herbert Spencer's philosophy of the Inscrutable, is not unlikely to bring us back to the Brahmanism and Paganism of races like the Hindoos and the Greeks. We take these papers,—very dissimilar in drift and style as they are,— together, because they converge on one point on which the vital intellectual difference between the modern and the medimval atti- tude of mind chiefly turns, and that is, the extraordinary confidence in system which they show,—system as the organ and even test of truth and error; assuming, as they do,—what we believe to be quite untrue,—that we have far better means of knowing the truth or falsehood of a whole system of religious thought, than the truth or falsehood of a particular fact or impression on which religious infer- ences may be founded. Archbishop Manning's clever letter to Tues- day's Times rests on precisely the same general idea. He quotes from the Apocalypse a vision which, as far as we know, nobody has ever understood even sufficiently to get out of it any clear spiritual feeling,—" I took the book from the hand of the angel and eat it up, and it was in my mouth sweet as honey, and when I had eaten it my belly was bitter,"—and argues from it that the certainly far more intelligible vision attributed to Margaret Mary of Paray-le-Monial, ought to be regarded as by no means out of keeping with the character of the visions recorded in the Bible. Well, but does that show that all the visions which are not un- Biblical in their character may be inspired, or rather that some of the genuinely Biblical visions are not inspired ? If we admit as a whole the divine character of all the visionary lore of the Bible, without reference to the actual blunders and miscarriages which human beings have made in dealing with it, no doubt it will follow that other visions of like character have a certain presumption in their favour, especially if they tend to embody orthodox doctrine. But where do we get the assumption from? As a matter of fact, fanaticism of the most ignorant and deplorable kind has sprung throughout all ages, and is now springing, out of the disastrous attempt to make a good many of the Biblical visions mean some- thing intelligible to successive generations of men. Why evade the obvious inference that in close connection with the highest religious impressions, there is apt to be an excitement of the human imagination which leads to sensuous mysticism of a very dangerous kind, and that the religious teachers whose works are embodied in the Bible were no exception to that rule ?

Again, the writer in the Month, who so playfully ridicules our notion that there was something attractive to noble Roman Catholics in that chivalrous passion for self-abnegation which wel- comed (as a forlorn-hope would welcome its dangerous duty) the notion of doing what all their Protestant fellow-subjects would think the very childishness and imbecility of faith,—writes in this way of the Pilgrimage :—" These things are not exactly matters of faith, I suppose, but we have as good reason for believing that the revelation, so to call it, on which the existing devotion to the Sacred Heart of onr Lord is mainly founded, was really made at Paray-le-Monial to the Blessed Margaret Mary, as we ordinarily have for any well-authenticated miracle, and more reason than we have for believing the ordinary facts of history, general or personal, such as that Shakespeare died at Stratford-on-Avon, or Sir Walter Scott at Abbotsford, or that Dr. Johnson did pen- ance in the market-place at Uttoxeter. But even if, by any chance, we were mistaken as to the facts, we should still honour our Lord by making a pilgrimage to the spot where we believe the great devotion to have been set on foot." But is not this virtually a confession that the pilgrims are em- bodying in their faith what may have been founded on a dream, and asserting that even if it were founded on a dream, as it was a dream perfectly consistent with all the Church's teaching, it was therefore a dream that might have been true? And that is pre- cisely what we find fault with in the whole intellectual attitude of Catholicism. It concentrates acts of devotion round all sorts of doubtful and ambiguous events,—to say the least of them, —provided only that the character of these events is cal- culated to deepen and widen the body of Christian emotion which has been, in great part, created, and certainly swelled, by these very same half-imaginative assumptions. How can even a Catholic say that, supposing Margaret Mary's vision was a mere dream, yet the pilgrimage in honour of that dream would do honour to Christ? Does God approve of the insobriety of mind which magnifies warm feelings into fictitious events? Is it not certain that pilgrim- ages founded on fictions,—assuming, as the Month admits to be at least possible, that this may be a fiction,—would tend to increase the number of such fictions, and so to pervert altogether the direction and scope of the wave of Christian sentiment? This is what Pro- testants believe to have happened again and again during the middle ages. And they are confirmed in that belief when they see writers like those in the Month talking of the evidence of the truth of Margaret Mary's vision being as good as the evidence that Sir Walter Scott died at Abbotsford, of which we have a large amount of contemporary evidence. There is absolutely no possible evidence of the truth of Margaret Mary's vision except, first, her own belief in its truth, and then, the miracles said to have been worked through her agency. But the first evidence is of an entirely doubtful kind, —nothing being more notorious than that illusions, demonstrably illusions, are found among the visions even of the best and most religious minds ; and the second evidence is hardly evidence at all, since even granting the alleged marvels, nothing is more diffi- cult to determine, as even Catholics themselves would admit, than the intellectual interpretation to be given to such marvels. They would not deny that heretics,—the famous Jansenists of Port Royal, for certain,—have had their miracles, or what is more like miracle than almost any recorded event of the kind, and they therefore would be the last to argue that miracle in connec- tion with a particular shrine guarantees the credibility of a vision related by the person whose body lies there. It seems to us that, on the showing of the Month itself, it takes the congruity of the vision of Margaret Mary with the general body of feeling en- gendered by a long history of spiritual emotion which was quite as little fastidious as to the reality of the facts by which it was called forth as is the emotion that now so vehemently clings to Margaret Mary's vision, to be at least a very large part of the evidence for its truth. And a more dangerous habit of mind we can hardly conceive.

And this, again, though here the ground is more purely intellec- tual, is the root-idea of Mr. St. George Mivart's very striking essay on " Contemporary Evolution," in the Contemporary for September. His main point, that Protestantism has not de- veloped any consistent theological dogma ; that Calvinism, Lutheranism, and the rest, were " mere backwaters," and not part of the main current of thought which the Protestant revolution started ; that modern philosophy is going back into pure naturalism ; and that in Mr. Herbert Spencer the worship of " the Inscrut- able" is approximating very close indeed to the Brahmanism of the " Upanishad," from which he quotes a most striking illustration of his thesis, is no doubt more or less true. But his wish to deduce from it that, without an authoritative Church, human thought will follow this identical line of development to its natural end, and revert to Paganism, is a mere sign of that enormous and dangerous faith in system which Roman Catholicism seems to cherish. No doubt the human intellect, after leaning so long on an unreliable basis of authority which gave way beneath it, would be likely to catch at all sorts of false substitutes for that basis of authority,—first bibliolatry, then the dicta of learning, that is, of scholarship, then the hasty abstractions of systematic philosophy, and so on. But whyshould the development go on iu one continuous line at all ? Why should not meo, after discovering those essential limitations of the human intellect which result in the mixing up of much error even with the teachings of true inspiration, be content to come back to the faith in God and in Christ as infinite Persons, as a central fact which emerges after every seeming die- appearance,—and to come back to it without the help of a system of theological thought to round off faith into what seems much more satisfying, but which, simply because it is the product of finite system-making on an infinite subject, is really fall of danger and mischief'? To us it appears that the great in- tellectual fault of the Roman Church, from the very first, was care- lessness as to the evidence for asserted facts which happened to suit its system. Its Angels, its sacred books, its Saints, its Confessors, its Martyrs, were all gradually embodied among the devotional assump- tions of the Church, with exceedingly little regard to any guiding principle of evidence; and hence it came that it is now burdened with Scriptures the authenticity and sobriety of which is as difficult to defend as in the case of Bel and the Dragon; with an almost omnivorous use of tradition which is always ready to cover the de- fects of the most unanswerable criticism ; and worst of all, with a well-recognised principle that it may be " pious " to believe, and to mingle in the most intimate way with your devotions, what it is needful to admit is at most only probable, and may be quite false.