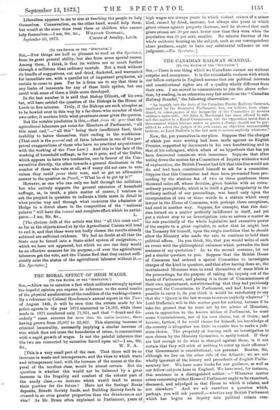 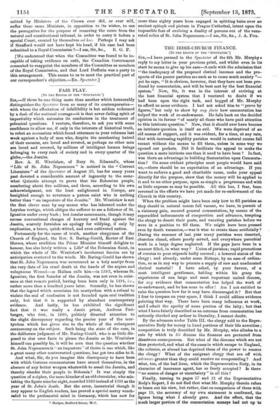 [TO THE EDITOR OF THE "SPECTATOR-1

Sut,—There is one thing which we Canadians cannot see without surprise and aunoyance. It is the remarkable coolness with which our fellow-subjects in England assume that our political interests and constitutional rights are of a quality wholly different from their own. I am moved to communicate to you the above reflec- tion, by reading, in an otherwise very fair article on the " Canadian Railway Scandal," the following observation :—

" An inquify into the facts of the Canadian Pacific Railway Contract, instituted by the Dominion Parliament, has, we believe, been aban- doned, in consequence of the incapacity of the Committee to receive evidence upon oath. Sir John A. Macdonald has since offered to sub- mit the matter to a Royal Commission, but the Opposition insist that a Government which labours under so grave a charge should not be per- mitted to select the judges of its own cause, an objection unreasonably factious, as Lord Dufferin is the last man to screen anybody whatever."

Now, Sir, put yourselves in our place. Suppose that the charges of which you were writing had been made against an English Premier, supported by documents in his own handwriting and in that of his colleagues, which admit of no hypothesis that has yet been discovered consistent with innocence. Suppose that after voting down the motion for a Committee of Inquiry without a word of explanation, the British Premier had felt that this line would not do, and had been constrained himself to ask for a committee. Suppose that this Committee had then been prevented from pro-

ceeding by the absolute fiat of two or three gentlemen three thousand miles off, whose decision, given besides with an extra- ordinary promptitude, which is in itself a great irregularity in the ordinary method of our proceedings, was based only upon the

interpretation of two or three words in a statute which every lawyer in the House of Commons, with perhaps three exceptions, had read in another way. Suppose, for example, that this deci- sion turned on a matter perfectly indifferent in itself, and yet put a violent stop to an investigation into so serious a matter as the sale practically of the whole legislative and executive power of the empire to a great capitalist, in order that he might loot the Treasury for himself, upon the single condition that he should allow the Ministry who made the sale to continue to hold their political offices. Do you think, Sir, that you would write of such an event with the philosophical calmness which pervades the first sentence of my quotation ? As to the second sentence, let me put a similar question to you. Suppose that the British House of Commons had ordered a special Committee to investigate charges of the kind in question, and that after having done ao, the incriminated Ministers were to avail themselves of some hitch in the proceedings, for the purpose of taking the inquiry out of the hands of Parliament, and placing it in those of Commissioners of their own appointment, notwithstanding that they had previously proposed the Commission to Parliament, and had found it im- possible to carry it, do you think it would be satisfactory to say that the " Queen is the last woman to screen anybody whatever " ? Lord Dufferin's will in this matter goes for nothing, because if he take the ground that be must act by the advice of Ministers, even in opposition to the known wishes of Parliament, he must name Commissioners, not of his own choice, but of theirs ; and because, farther, if ho could choose for himself, his knowledge of the country is altogether too little to enable him to make a judi- cious choice. The propriety of leaving such an investigation to men chosen by the Ministry themselves is easily tested. If they are bad enough to do what is charged against them, is it not certain that they will stick at nothing to cover up their offences? Our Government is constitutional, not personal. Besides, Sir, although we live on the other side of the Atlantic, we are not wholly ignorant of the history and precedents of English Parlia- mentary law. We have some books for our guidance, as well as our fellow-subjects have in England. We have read, for instance, this sentence in a distinguished author :—" Whatever matter arises concerning either House of Parliament ought to be examined, discussed, and adjudged in that House to which it relates, and not elsewhere." And we ask ourselves a question which, perhaps, you will ask yourself,—whether any British Parliament which has begun an inquiry into political crimes com- milted by Ministers of the Crown ever did, or ever will, suffer these same Ministers, in opposition to its wishes, to use the prerogative for the purpose of removing the cause from the natural and constitutional tribunal, in order to carry it before a special Court, created by themselves ad hoc. Perhaps I may ask if Strafford would not have kept his head, if his ease had been submitted to a Royal Commission ?—I am, Sir, &c., E. G. P.

[We understood that when the Committee was found to be in- capable of taking evidence on oath, the Canadian Government consented to reappoint the members of the Committee as members of the Royal Commission, and that Lord Dufferin was a party to this arrangement. This seems to us to meet the practical part of our correspondent's objection.—En. Spectator.]