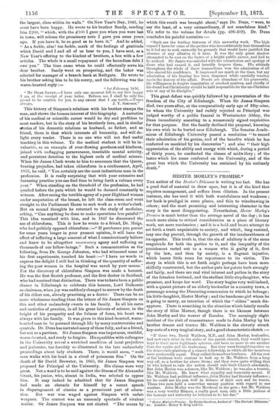 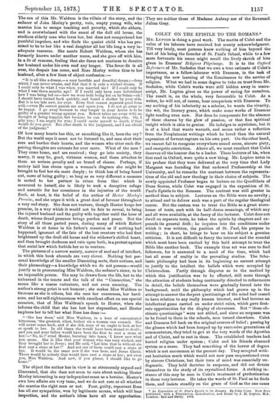 THE author of the Doctor's Dilemma is writing too fast. She has a good deal of material to draw upon, but it is of the kind that

requires management, and suffers from dilution. In the present instance, she has used it with both wastefulness and weakness ;

her book is prodigal in some places, and thin to wiredrawing in others ; and the most promising and interesting character in the story is the most disappointing. Nevertheless, Hester Morley's Promise is much better than the average novel of the day ; it has much more claim to critical consideration as a piece of literary work, not mere mechanism ; and it is a bold and brave attempt to set forth a truth unpalatable to society, and which, long resisted, may one day prevail, through the growth of the intolerableness of

its opposite. This truth is, that the sin of adultery is of the same magnitude for both the parties to it, and the inequality of the

punishment meted out to a woman who is guilty of it, first by the law, and then by society, is a flagrant injustice, which leaves little room for repentance to its victim. The story in which this is set forth might perhaps have been more skilfully constructed, but the author puts her points both strongly

and fairly, and there are real vital interest and pathos in the story of the forsaken husband, and the stedfast little stepdaughter, who promises, and keeps her word. The story begins very well indeed, with a quaint picture of an elderly bookseller in a country town, a personage among the Dissenting communion to which he belongs ; his little daughter, Hester Morley ; and the handsome girl whom he is going to marry, an intention of which the " elders" much dis- approve. There is something in the situation which faintly recalls the story of Silas -Varner, though there is no likeness between John Morley and the weaver of Raveloe. The seemingly slight incident of the visit of remonstrance made to John Morley by his brother deacon and trustee Mr. Waldron is the cleverly struck key-note of a very tragical story, and a good characteristic sketch :—

" If these two, David Waldron, M.P., and .Tohn Morley, bookseller, had mot each other in the aisles of the parish church, they would have kept to their more legitimate spheres, and been no more to one another than the squire and his tradesman. But they were brought together on the democratic platform of a church fellowship, in which all the members were professedly equal. They called themselves brethren. All the rest of the brethren were content to look up to Mr. Waldron from a long way off, as a brother far above them ; and they were quite willing that he who helped to rule the nation should rule their Church absolutely. But John Morley was a deacon, like Mr. Waldron ; he was also a trustee, like Mr. Waldron. He knew what equality and fraternity meant. If Mr. Waldron had political influence, John Morley had literary influence ; for he could use his pen well in defence of their sect and its tenets. These two men held a somewhat uneasy position with regard to one another. John Morley was the Mordecai in the gate ; but Mr. Waldron was a very worthy Haman, a really good man, only a little jealous of the homage and authority he believecbto bo his due."

The son of this Mr..Waldron is the villain of the story, and the seducer of John Morley's pretty, vain, empty young wife, who marries him to escape teaching and poverty, which she abhors, and is overwhelmed with the ennui of the dull old house, the studious elderly man who loves her, but does not comprehend her youthful impulses, and who finds the quaint child who has pro- mised to be to her like a real daughter all her life long a very in- adequate resource. She meets Robert Waldron, whom she has formerly known under another name, and she goes off with him, in a fit of remorse, feeling that she dares not continue to deceive her husband under his own roof any longer. The fever-fit is all over, the despair has come, and Rose Morley writes thus to her husband, after a few lines of abject confession :—

" It is all like a dream,—a very horrible and dreadful dream ;—from which I can never awake, and find that it is only a wicked dream. If I could only be what I was when you married me I If I could only be what I was three months ago ! If I could only have seen beforehand how I was being led on—how we were both being led on by Satan—oh! I should have turned back quickly, and found a shelter by your side. But it is too late now, for ever. Even God cannot separate good from evil,—even He cannot punish me and spare you. I do not go away to be happy. I go away because to stay longer in your house is to be guilty of a greater wrong against you. Robert takes me away with no thought of being happier, but because he can do nothing else. Oh, I pity you; I am angry for you; I could smite myself to death, if that would do you good. But after death is the judgment, and I am afraid of the judgment."

Of how many hearts has this, or something like it, been the cry ? But the world says it must not be listened to, and men shut their ears and harden their hearts, and the women who utter such die- pairing thoughts are outcasts for ever more. What of the men ? They come home, and are received ; they go into society, they marry, it may be, good, virtuous women, and there attaches to them no serious penalty and no brand of shame. Perhaps, if society laid less stress upon a woman's disgrace she might be brought to feel her sin more deeply ; to think less of being found out, more of being guilty ; so long as so very different a measure is meted to her partner in crime from that which is measured to herself, she is likely to seek a deceptive refuge and narcotic for her conscience in the injustice of the world. Such, at least, is the belief of the author of Hester Morley's Promise, and she urges it with a great deal of fervour throughout a very sad story. She does not venture, though Hester keeps her promise, in a way which it would not be fair to reveal, to bring the injured husband and the guilty wife together until the hour of death, whose dread presence brings pardon and peace. But the story of all those parted years, during many of which Robert Waldron is at home in his father's mansion as if nothing had happened, ignorant of the fate of the lost creature who had first brightened up the droll old house and the widower's chilled heart, and then brought darkness and ruin upon both, is a protest against that social law which forbids her so to venture.

The pictures of a narrow society, narrow of soul and of intellect, in which this book abounds are very clever. Nothing but per- sonal knowledge of the smaller Dissenting sects, their notions, and their phraseology—a knowledge which we do not possess—would justify us in pronouncing Miss Waldron, the seducer's sister, to be an impossible person. She may be drawn from the life, but to the unlearned in the tenets and the talk of the " Connection," she seems like a coarse caricature, and not even amusing. The author's strong point is not humour ; she makes Miss Waldron as tiresome as she is odious, but she uses her coarseness, her hard- ness, and her self-righteousness with excellent effect on one special occasion, that of Miss Waldron's speech to Hester, when she informs the child that she has lost her stepmother, and Hester implores her to tell her what Rose has done :-

"' She has done,' said Miss Waldron, in a tone of concentrated bitterness, 'the greatest, vilest, foulest sin a woman can commit. She will never come back, and if she did, none of us ought to look at her or speak to her. In old times she would have been stoned to death ; and you and your father would have been the first to cast a stone at her.'—' No, no cried Hester, bursting into tears, know now what you mean. She is like that poor woman who was very wicked, and they brought her to Jesus; and He said, "Let him that is without sin first cast a stone at her !" And not one of them could cast a stone at her. It would be the same now if she was here, and Jesus Christ. There would be nobody that would dare cast a stone at her ; not even you, Miss Waldron. And now, if you please, I should like to go home."

The object the author has in view is so strenuously argued and illustrated, that she does not seem to care about making Heater Morley interesting in any independent sense as a heroine. Hester's own love affairs are very tame, and we do not care at all whether she marries the right man or not. Poor, guilty, repentant Rose has all our sympathies, won by legitimate means, which will bear inspection, and the author's ideas have all our approbation. They are neither those of Madame Aubrey nor of the Reverend. Julian Gray.