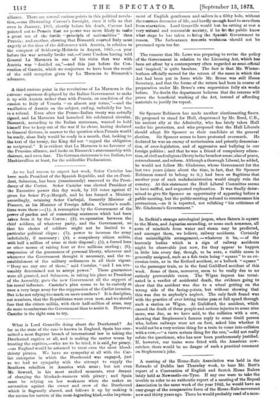 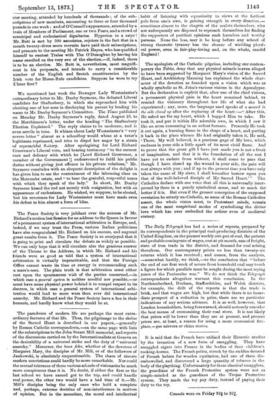 Page 2, 13 September 1873 — A meeting of the Home-Rule Association was held in the
Close

A meeting of the Home-Rule Association was held in the

Rotundo of Dublin last Thursday week, to hear Mr. Butt's report of a Convention of English and Scotch Home Rulers lately held at Newcastle-on-Tyne. If any one were to take the trouble to refer to an authentic report of a meeting of the Repeal Association in the same week of the year 1843, he would have an easy gauge of the comparative force of the Home-Rule movement now and thirty years ago. There he would probably read of a mon-

ster meeting, attended by hundreds of thousands ; of the sub- scriptions of new members, amounting to three or four thousand pounds in one week ; and of O'Connell's appearance, attended by a train of Members of Parliament, one or two Peers, and a crowd of municipal and ecclesiastical dignitaries. Hyperion to a satyr ! Mr. Butt is met by 300 associates, rejoices in the fact that in a month twenty-three more recruits have paid their subscriptions, and presents to the meeting Mr. Patrick Hayes, who has qualified himself to contest Tralee with The O'Donoghue by having his name enrolled on the very eve of the election,—if, indeed, there is to be an election. Mr. Butt is, nevertheless, most magnifi- cent in his proposals, and intends to carry a considerable number of the English and Scotch constituencies by the Irish vote for Home-Rule candidates. Suppose he were to try Ulster first?