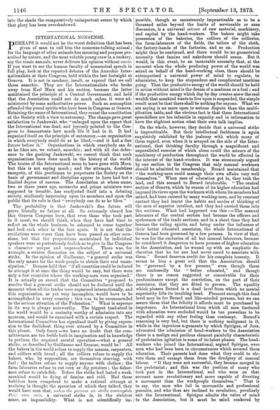 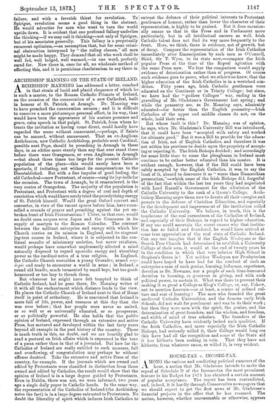 PERHAPS it would not be the worst definition that has been given of man to call him the nonsense-talking animal ; for the language of other animals has meaning and purpose pre- scribed by nature, and the most voluble young crow in a rookery, say the comic annuals, never delivers his opinion without cause. If you want to see the human faculty of nonsensical speech in full play, look at the reported debates of the Anarchic Inter- nationalists at their Congress, held within the last fortnight at Geneva. It is not in mockery, insult, or reproof that we call them anarchic. They are the Internationalists who broke away from Karl Marx and his section, because the latter maintained the principle of a Central Government, and held that the Association could not do much unless it were ad- ministered by some authoritative power. Such an assumption offended the proud spirits who have been in Congress at Geneva. Retaining the name of International, they recast the constitution of the Society with a view to autonomy. The change gave great satisfaction to Jankowski, who "enlarged upon the report that the International was dead, and joyously pointed to the Con- gress to demonstrate how much life it had in it. It had organised itself on the principle of autonomy,—an organisation in which everybody could do as he liked,—and it had a fine future before it." Organisations in which everybody can do as he likes are, we submit, anarchic ; and with all due defer- ence to the gushing Jankowski, we cannot think that such organisations have done much in the history of the world. The brains of the International seem to have gone with Marx, but this is not saying much ; and the attempts, doubtless energetic, of this gentleman to perpetuate the Society on the basis of government and discipline appear to have had but a limited degree of success. The Association at whose name, two or three years ago, monarchs and prime ministers were supposed to tremble, has readjusted itself into a debating society, studiously impressing upon its members and upon the public that its rule is that " everybody can do as he likes."

The probability is that Jankowski's fine future will prove literally no future at all. So extremely absurd has this Geneva Congress been, that even those who took part in it must, we should think, when they have had time to reflect on the whole business, be ashamed to come together and look each other in the face again. It is not that the resolutions were worse than have been passed on other occa- sions, but that the propositions maintained by individual speakers were so portentously foolish as to give to the Congress

a character unique and unprecedented. There was, for example, a serious discussion on the subject of a universal strike. In the opinion of Guillaume, " a general strike was the only means for the work-people to obtain their real eman- cipation." Brousse held that " if all countries could be induced to attempt it at once the thing would be easy, but there were only a few countries where the working-men were organised." It is actually on record that the Committee " proposed to resolve that a general strike should not be declared until the moment when all the trades were organised internationally, and this organisation, as yet very incomplete, would have to be accomplished in every country ; this was to be recommended to the serious attention of the Federation." What is supreme in its way is always noteworthy. The biggest toad-stool in the world would be a curiosity worthy of admission into any museum, and woukl be examined with a certain respect. The International Committee has signalised itself by giving expres- sion to the foolishest thing ever uttered by a Committee in this planet. Only fancy—we have no doubt that the com- mitteemen are too feeble both in imagination and in knowledge to perform the required mental operation—what a general strike, as described by Guillaume and Brousse, would be i All the bakers in the world refuse to supply the masons, carpenters, and colliers with bread ; all the colliers refuse to supply the bakers, who, by supposition, are themselves starving, with fuel ; the tailors refuse to supply anyone with clothes ; the farm labourers refuse to cut corn or dig potatoes ; the fisher- men refuse to catch fish. Before the strike had lasted a week, mankind would be dying of famine and cold. Had these babblers been competent to make a rational attempt at realising in thought the operation of which they talked, they would have seen that, unless the persons on strike contemplate their own ruin, a universal strike is, in the strictest sense, an impossibility. What is not scientifically im- possible, though so monstrously impracticable as to be a thousand miles beyond the limits of serviceable or sane discussion, is a universal seizure of raw material, machinery, and capital by the hand-workers. The bakers might take possession of the bakeries, the colliers of the collieries, the farm-labourers of the fields, the tailors of the cloth, the factory-hands of the factories, and so on. Production might thus be continued, and there would be no geometrical necessity that famine and nakedness should ensue. But it would, in this event, be an inexorable necessity that, at the moment when the whole producing power of the world was seized on behalf of the hand-working class, there should be extemporised a universal power • of mind to regulate, to administer, to keep the stupendous and complicated machine going. That the productive energy of the world should be held in action without mind is the dream of a madman or a fool ; and if the productive energy which day by day creates anew the real wealth that mankind wants to live upon is suspended, the simple result must be that there shall be nothing for anyone. What we are saying is no more open to serious dispute than the multi- plication table, and the obvious fact is that these International speechifiers are too infantile in capacity and in information to have the slightest notion what their own talk implies.

On the whole, however, they decide that a universal strike is impracticable. But their intellectual feebleness is again exquisitely exhibited by the jealousy with which many of them regard, even when it is arrayed on the side of the Inter- national, that thinking faculty through a magnificent and unparalleled exercise of which alone could the seizure of the machinery of production throughout the world be effected in• the interest of the hand-workers. It was strenuously argued by one section in the Congress that only manual workmen should be admitted to membership. Berard maintained that " the working-men could manage their own affairs very well themselves." When men of education got in, they took the lead, and this seemed to Berard intolerable. " The central section of Geneva, which by reason of its higher education had imposed its views upon the workmen with whom its members had mixed, had been entered by many working-men, and by constant contact they had learnt the habits and modes of thinking of the men of superior intellect, and they had carried them into the sections. What had happened was this :—The manual labourers of the central section had become the officers and spokesmen of the trade sections, and in a short time they had become the ruling spirits, and being under the influence of their better educated associates, the whole International of Geneva had been governed by a few persons. In view of that, he was for the exclusion of all but manual labourers, because he considered it dangerous to have persons of higher education in the Association, and he wound up with an emphatic de- claration that he for one had never cared to associate with them." Berard deserves credit for his complete honesty. It seems to him a great evil that the Association should be "governed by a few persons," even though these are confessedly the " better educated," and though there is no reason suggested or conceivable for their predominance except the conviction, on the part of their associates, that they are fitted to govern. The equality which pleases Berard is a dead level from which no mental superiority lifts its insulting head. Pleasant enough this dead level may be for Berard and like-minded persons, but we can assure them that the felicity it affords must be purchased by impotence. An International from which all men tinctured with education were excluded would be too powerless to be regarded with any other feeling than contempt. Berard's reasoning is very bad, but there is nothing malignant in it, while in the ingenious arguments by which Spirigue, of Jura, advocated the admission of head-workers to the Association there is a malign and perilous element painfully characteristic of proletarian agitation in some of its latest phases. The head- workers who joined the International, argued Spirigue, were men who had been born in circumstances which secured there education. Their parents had done what they could to ele- vate them and exempt them from the drudgery of manual labour. " If they were not successful, they became merged in the proletariat ; and this was the position of many who took part in the International, and who were on that account more revolutionary and more capable of directing a movement than the workpeople themselves." That is to say, the men who fail in mercantile and professional pursuits, and who thus are inclined to revolution, peculiarly suit the International. Spirigue admits the value of mind to the Association, but it must be mind cankered by

failure, and with a feverish thirst for revolution. To Spirigue, revolution seems a good thing in the abstract. He would advertise for men who want to turn the world upside down. It is evident that one profound fallacy underlies the thinking—if we may call it thinking—not only of Spirigue, but of his associates generally. This fallacy is a perpetually recurrent optimism,—an assumption that, but for some crimi- nal obstruction interposed by " the ruling classes," all men might be made happy. They demand that all who work shall be well fed, well lodged, well warmed,—in one word, perfectly cared for. Now there is, once for all, no wholesale method of effecting this, and it is pernicious charlatanism to say there is.