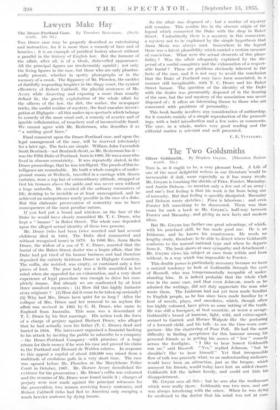 The Druce-Portland Case. By Theodore Besterman. (Duck- worth. 10s. 6d.) THE Druce case may be properly described as entertaining and instructive, for it is more than a comedy of liars and of lunatics ; it is an example of juridical foolery almost without a parallel in the history of English law. But the humour of the affair, after all, is of a bleak, dishevelled appearance. All the principal figures are irredeemably squalid ; not only the living figures in the case, but those who are only phantas- mally present, whether in spotty photographs or in the memory of a crook. The flippancy of Mr. Plowden, the cackles of dutifully responding laughter in the dingy court, the cynical effrontery of Robert Caldwell, the playful acuteness of Mr. Avory while dissecting and exposing a more than usually defiant lie, the greedy exploitation of the whole affair by the officers of the law, the dirt, the malice, the newspaper tricks, the sordid residue of mystery, the final macabre investi- gation at Highgate—all this makes up a spectacle which belongs to comedy of the more cruel sort, a comedy of avarice and of ignoble collaboration, of treachery and of inconceivable fraud. We cannot agree with Mr. Besterman, who describes it as " a rattling good farce."

Final comment upon the Druce-Portland case, and upon the legal management of the case, will be reserved (obviously) for a later age. The facts are simple. William John Cavendish Scott Bentinek—not Bentinek-Scott, as Mr. Besterman has it— was the Fifth Duke of Portland, born in 1800. He was a man who lived in obscure eccentricity. It was repeatedly stated, in the Druce proceedings, that he was intelligent. The proofs of this in- telligence are remarkable. He built a whole complex of under- ground rooms at Welbeck, travelled in a carriage with drawn curtains, wore a top hat of extraordinary altitude, strapped or tied his trousers above the ankle, and was never seen without a huge umbrella. He avoided all the ordinary encounters of life, desiring to be invisible or at least unrecognised, and he achieved an unimportance rarely possible in the case of a duke. But this elaborate preservation of nonentity was to have consequences of the most peculiar nature.

If you had put a beard and whiskers on the face of the Duke he would have closely resembled Mr. T. C. Druce, who kept a " bazaar" in Baker Street. The whole case depended upon the alleged actual identity of these two persons.

Mr. Druce (who had been twice married and had several children) died in 1804. The Duke died (unmarried and without recognised issue) in 1879. In 1890 Mrs. Anna Maria Druce, the widow of a son of T. C. Druce, asserted that the burial of the Baker Street dealer was a bogus affair, that the Duke had got tired of his bazaar business and had therefore deposited the entirely fictitious Druce in Highgate Cemetery. The coffin, she insisted, was empty, or contained only a few pieces of lead. The poor lady was a little unsettled in her mind when she appealed for an exhumation, and a very short experience of legal procedure was enough to drive her com- pletely insane. But already we are confronted by at least three unsolved mysteries : (1) How did this highly fantastic story originate ? (2) How did it come to be taken up seriously? (3) Why had Mrs. Druce been quiet for so long After the collapse of Mrs. Druce and her removal to an asylum the affair was revived in 1905 by G. H. Druce, who came to England from Australia. This man was a descendant of T. C. Druce by his first marriage. His action took the form of a charge of perjury against Herbert Druce, who alleged that he had actually seen his father (T. C. Druce) dead and buried in 1804. The intervener organised a financial backing to his attack by inviting the public to subscribe to a company —the Druce-Portland Company—with promises of a huge return for their money if he won his case and proved his claim to the Portland and Howard de Walden estates. In response to this appeal a capital of about £30,000 was raised from a multitude of credulous gulls in a very short time. The case was opened before Mr. Plowden at the Marylebone Police Court in October, 1907. Mr. Horace Avory demolished the evidence for the prosecution ; Mr. Druce's coffin was exhumed and the remains of Mr. Druce were found inside it ; charges of perjury were now made against the principal witnesses for the prosecution, two women receiving heavy sentences, and Robert Caldwell (who had fled to America) only escaping a much heavier sentence by dying insane. So the affair was disposed of ; but a residue of mystery still remains. This residue lies in the obscure origin of the legend which connected the Duke with the shop in Baker Street. Undoubtedly there is a mystery in this connexion, a mystery not to be explained by the simple hypothesis that Anna Maria was always mad. Somewhere in the legend there was a latent plausibility which carried a certain measure of conviction. What were the actual elements of this plaus- ibility ? Was the affair adequately explained by the dis- persal of a sordid conspiracy and the exhumation of a respect- able burial ? These are problems obviously inherent in the facts of the case, and it is not easy to avoid the conclusion that the Duke of Portland may have been associated, in a manner still inexplicable, with T. C. Druce and his Baker Street bazaar. The question of the identity of the Duke with the dealer was presumably disposed of in the hearing of the case, but the real mystery of the association was never disposed of ; it offers an interesting theme to those who are concerned with problems of personality.

This book hardly involves any consideration of authorship, for it consists mainly of a simple reproduction of the proceed- ings, with a brief introduction and a few notes or comments. The case, as a whole, makes very good reading and the editorial matter is relevant and well presented.