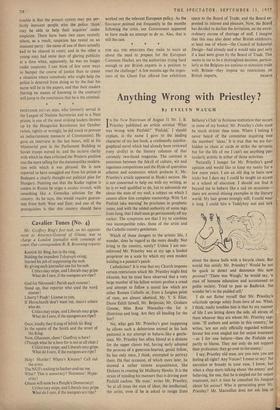 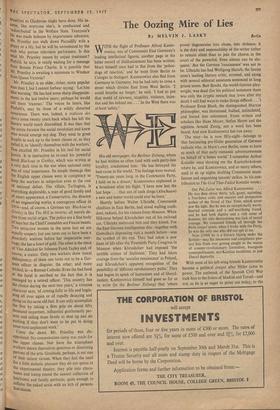 Anything Wrong with Priestley?

By EVELYN WAUGH TN the New Statesman of August 31 Mr. J. B. Priestley published an article entitled What was wrong with Pinfold?' 'Pinfold,' I should explain, is the name I gave to the leading character of my last book, a confessedly autobio- graphical novel which had already been reviewed (very civilly) in the literary columns of that curiously two-faced magazine. The contrast is notorious between the Jekyll of culture, wit and ingenious competitions and the Hyde of querulous atheism and economics which prefaces it. Mr. Priestley's article appeared in Hyde's section. He is not concerned to help me with my writing, as he is sn well qualified to do, but to admonish me about the state of my soul, a subject on which I cannot allow him complete mastership. With 'Let Pinfold take warning' he proclaims in prophetic tones, and with the added authority of some tags from Jung, that I shall soon go permanently off my rocker. The symptoms are that I try to combine two incompatible roles, those of the artist and the Catholic country gentleman.

'Which of those dangers to the artistic life, I wonder, does he regard as the more deadly. Not living in the country, surely? Unless I am mis- informed Mr. Priestley was at my age a landed proprietor on a scale by which my own modest holding is a peasant's patch.

Catholicism? It is true that my Church imposes certain restrictions which Mr. Priestley might find irksome, but he must have observed that a very large number of his fellow writers profess a creed and attempt to follow a moral law which are either Roman Catholic or, from a Jungian point of view, are almost identical. Mr. T. S. Eliot, Dame Edith Sitwell, Mr. Betjeman, Mr. Graham Greene, Miss Rose Macaulay—the list is illustrious and long. Are they all heading for the bin?

No, what gets Mr. Priestley's goat (supposing he allows such a deleterious animal in his lush pastures) is my attempt to behave ,like a gentle- man. Mr. Priestley has often hinted at a distaste for the upper classes but, having early adopted the persona of a generous-hearted, genial fellow, he has only once, I think, attempted to portray them. On that occasion, of which more later, he showed a rather remote acquaintance, like Dickens in creating Sir Mulberry Hawke. It is the strain of minding his manners that is driving poor Pinfold cuckoo. 'He must,' writes Mr. Priestley, 'be at all times the man of ideas, the intellectual, the artist, even if he is asked to resign from Bellamy's Club' (a fictitious institution that occurs in some of my books). Mr. Priestley's clubs must be much stricter than mine. Where I belong I never heard of the committee inquiring into the members' ideas.' It is true that we are for- bidden to cheat at cards or strike the servants, but for the life of me I can't see anything par- ticularly artistic in either of those activities.

Naturally I hunger for Mr. Priestley's good opinion and would like to keep my sanity for a few more years. I am an old dog to learn new tricks but I dare say I could be taught an accent at a school of. elocution. I should not find it beyond me to behave like a cad on occasions— there are several shining examples in the literary world. My hair grows strongly still; I could wear it long. I could hire a Teddyboy suit and lark about the dance halls with a bicycle chain. But would this satisfy Mr. Priestley? Would he not be quick to detect and denounce this neW persona? 'There was Waugh,' he would say, 'a man of humane education and accustomed to polite society. Tried to pass as Redbrick, No wonder he's in the padded cell.'

I do not flatter myself that Mr. Priestley's solicitude springs solely from love of me. What, I think, really troubles him is that by my manner of life I am letting down the side, all eleven of them whoever they are whom Mr. Priestley cap- tains. 'If authors and artists in this country,' he writes, 'are not only officially regarded without favour but even singled out for unjust treatment —as I for one believe—then the Pinfolds are partly to blame. They not only do not support their profession; they go over to the enemy.'

I say, Priestley old man, are you sure you are feeling all right? Any Voices? I mean to say! No narcotics or brandy in your case, I know, but when a chap starts talking about `the enemy' and believing, for one, that he is singled out for unjust treatment, isn't it time he consulted his Jungian about his anima? Who is persecuting poor Mr. Priestley? Mr. Macmillan does not ask him to breakfast as Gladstone might have done. His in- come, like everyone else's, is confiscated and redistributed in the Welfare State. Tennyson's life was made hideous by importunate admirers; Mr. Priestley can walk down Piccadilly with a POPPY or a lily, but he will be unmolested by the mob who pursue television performers. Is this What Mr. Priestley means by unjust treatment? Pinfold, he says, is vainly waiting for a message from Bonnie Prince Charlie. It is possible that Mr. Priestley is awaiting a summons to Windsor from Queen Victoria?

Mr. Priestley is an older, richer, more popular Man than I, but I cannot forbear saying : 'Let him take warning.' He has had some sharp disappoint- ments in the last twelve years; perhaps he would call them 'traumas.' The voices he hears, like Pinfold's, may be those of a wildly distorted conscience. There was, indeed, a trahison des clercs some twenty years back which has left the literary world much discredited. It was then that the astute foresaw the social revolution and knew Who would emerge top dog. They went to great lengths to suck up to the lower classes or, as they called it, to 'identify themselves with the workers.' rew excelled Mr. Priestley in 'his zeal for social justice. It is instructive to re-read his powerful novel Blackout in Greeley, which was written at a Very dark time in the war when national unity Was of vital importance. Its simple themejs that the English upper classes were in conspiracy to keep the workers in subjection even at the cost Of national defeat. The villain, Tarlington, is everything deplorable, a man of good family and of smart appearance, a Conservative, the director of an engineering works, a courageous officer in 1914----and, of course, a German spy. Blackout 4n Gretley is like The Hill in reverse; all morals de- rive from social origin. The police are a fine body of men but the Chief Constables are Fascist beasts. Two attractive women in the same fast set are equally suspect; but one turns out to have been a disorderly waitress before her respectable mar- riage; she has a heart of gold. The other is the niece of Vice-Admiral Sir Johnson Fund-Tapley and, of course, a traitor. Only two workers show moral delinquency; of these one turns out to be a Ger- Man officer in disguise; the other, and more Wicked, is—a Roman Catholic. Even the bad food at the hotel is ascribed to the fact that it is Managed by a retired officer. 'This country has the choice during the next two years,' a virtuous Character says, 'of coming fully to life and begin- ning all over again or of rapidly decaying and dying on the same old feet. It can only accomplish the• first by taking a firm grip on about fifty thousand important, influential gentlemanly per- sons and telling them firmly to shut up and do nothing if they don't want to be put to doing some most unpleasant work.' Came the dawn. Mr. Priestley was dis- appointed. No concentration camp was made for the upper classes. Nor have the triumphant Workers shown themselves generous or discerning Patrons of the arts. Gratitude, perhaps, is not one of their salient virtues. When they feel the need for a little xsthetic pleasure they do not queue at the experimental theatre; they pile into chara- banes and tramp round the nearest collection of heirlooms and family portraits; quite enough to inflame the naked artist with an itch of persecu- tion mania.