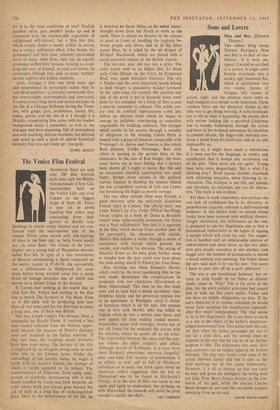 ALTHOUGH there are now over 200 filth festivals each year, only the Mostra Internazionale d'Arte an- ; ematografica held on the Venice Lido can rival Cannes as the biggest binge of 'them all. Twice a year six or seven ' hundred film critics stop commuting from their garrets • to deadly a.m. showings in almost empty theatres and are con- fronted with the meat-market side of the cinema. Films come served with side-helpings of stars in the 'flesh' and, as Jerry Lewis would say, oh, what flesh! The climax of the year's display was a young lady of Hungarian descent, called Eva Six. In spite of a face reminiscent of Monroe surmounting a figure computed on the metric system at 97-42-94, she successfully ran a delicatessen in Hollywood for some years before being whisked away into a quick brace of teenage musicals, one of which was shown on a distant fringe of the festival.

If Cannes had nothing, in the starlet line to rival Eva Six, Venice had nothing in the film line to match The Leopard or The Birds. Even so, it did quite well by producing four new films of real note, and for the first time in many a long year, one of them was British.

This was Joseph Losey's The Servant, from a screenplay by Harold Pinter. It received a less than cordial welcome from the Italians, appar- ently because the nuances of Pinter's dialogue were not rendered in the Italian subtitles. If they had been, the reception would probably have been even worse. The Servant of the title is employed by an arrogant young snob to look after him in his Chelsea home. Under the camouflage of his humble status, he wages a battle With his master's fiancee, the strategy of which is hardly apparent to its subject. The transformation of behaviour from seedy man- servant to slatternly, domineering wife is bril-

liantly handled by Losey and Dirk Bogarde, an actor whose work has always gone beyond the call of duty in a long line of undistinguished films. Here in the performance of his life, he

is matched by Sarah Miles, as his weird 'sister,' brought down from the North to work as the maid. There is almost no director in the cinema as good as Losey at handling the rapports be- tween people and decor, and as id his other recent films, he is aided by the set designs of Richard Macdonald, which are placed with a social precision unique in the British cinema.

The Servant, alas, did not win a prize. The main award went to an Italian film, Le Mani sulfa Citta (Hands on the City), by Francesco Rosi, who made Salvatore Giuliano. The city is Naples and the most important hands belong to Rod Steiger, a speculative builder favoured by the right-wing city council. His position and that of the party is put in jeopardy when work done by his company on a block of flats causes a near-by tenement to, collapse. The public out- cry and its political repercussions come just before an election from which he hopes to emerge by judicious vote-buying as councillor responsible for building contracts. The intrigue which results in his success through a transfer of allegiance to the winning Centre Party is treated with a grasp of situation comparable with Preminger's in Advise and Consent, a film which Rosi admires. Unlike Preminger, Rosi only refers in passing to the private lives of his characters. In the case of Rod Steiger, the treat- ment leaves me at least feeling that I haven't been shown all I ought to know. But this and an occasional wasteful construction are small faults. Rather more serious is the political naivety implicit in showing the reasons behind the less sympathetic actions of Left and Centre but presenting the Right as merely corrupt.

The two other notable films were French, a good recovery after the uniformly disastrous French entry at Cannes. The' official entry was Louis Malle's Le Feu Follet (Will-o'-the-Wisp), whose origins in .a work by Drieu la Rochelle caused some unfavourable comments, for Drieu was a Nazi collaborator. Not that it is apparent in the film, which derives from another part of his personality, his obsession with suicide. Malle's film follows a writer through a series of encounters with friends which precede his suicide, and confirm his decision. The acting of Maurice Ronet as the hero gives further cause to wonder how the jury could ever have given the male acting award to Finney for Torn Jones.

Also showing was Alain Resnais's Muriel, which could be the most maddening film he has ever made. Remember the complications he produced with two characters (Hiroshima) or three (Marienbad). This time he has five main ones and at least half a dozen secondary ones. Delphine Seyrig and her grown-up stepson live in an apartment in Boulogne, amid a clutter of furniture which is all for sale. The stepson was in love with Muriel, who was killed in Algeria when he was a service man there, and now spends his time making candid movies. Stepmother, taken with nostalgia, invites one of her old lovers for the weekend. He arrives with his mistress, whom he passes off as his niece. The relationship between the niece and the step- son echoes the older couple's past affair. Although devoid of flashbacks, it is once more about Resnais's obsessions: memory, .forgetful- ness, and time. The manner of presentation is as elliptic as ever and so full of Hitchcock references as to make One think again about an American critic's suggestion that the key to Marienbad was to be found in Hitchcock's Vertigo. It is the sort of film one needs to see again and again to understand, but perhaps, as with Marienbad, the rewards will never be great