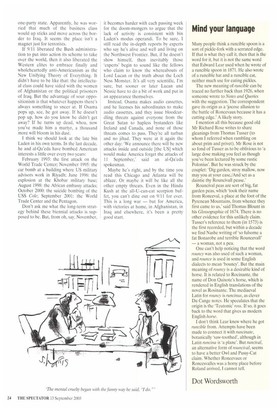 The new meaning of runcible can be traced no further back than 1926, when someone wrote to Notes and Queries with the suggestion. The correspondent gave its origin as a 'jocose allusion to the battle of Roncevaux because it has a cutting edge.' A likely story.

I mention all this because good old Mr Richard Rose writes to share gleanings from Thomas Tusser (to whom I referred when rambling on about prim and privet). Mr Rose is not so fond of Tusser as to be oblivious to `a large dose making you feel as though you've been lectured by some rustic Polonius'. But he was struck by the couplet: 'Dig garden, stroy mallow, now may you at your ease,/And set as a daintie thy Rouncivall pease.'

Rouncival peas are sort of big, fat garden peas, which 'took their name from Ronceval, a place at the foot of the Pyrenean Mountains, from whence they first came to us,' said Thomas Blount in his Glossographia of 1674. There is no other evidence for this unlikely claim. Tusser's reference to them (in 1573) is the first recorded, but within a decade we find Nashe writing of 'so fulsome a fat Bonarobe and terrible Rouncevall' — a woman, not a pea.

One can't help noticing that the word rouncy was also used of such a woman, and rounce is used in some English dialects to mean 'bouncy'. But the main meaning of rouncy is a desirable kind of horse. It is related to Rocinante, the name of Don Quixote's horse, which is rendered in English translations of the novel as Rosinante. The mediaeval Latin for rouncy is runcinus, as clever Du Cange notes. He speculates that the origin is the 'Teutonic' ross. If so, it goes back to the word that gives us modern English horse.

I don't think Lear knew where he got runcible from. Attempts have been made to connect it with runcinate, botanically 'saw-toothed', although in Latin runcina is 'a plane'. But runcival, an alternative form of rouncival, seems to have a better Owl and Pussy-Cat claim. Whether Roncevaux or Roncesvalles was a horsy place before Roland arrived, I cannot tell.