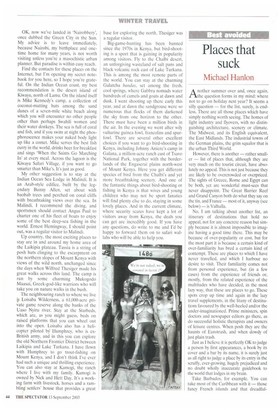 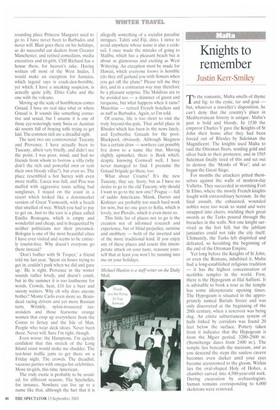 Another summer over and, once again, the question forms in my mind: where not to go on holiday next year? It seems a silly question — for the list, surely, is endless. There are all those places which have simply nothing worth seeing. The homes of light industry and flyovers, with no distinguishing architecture, scenery or climate. The Midwest, and its English equivalent, the East Midlands. The industrial towns of the German plains, the grim squalor that is the urban Third World.

However, there is another — rather smaller — list of places that, although they are very much on the tourist circuit, have absolutely no appeal. This is not just because they are likely to be overcrowded or overpriced. The sights of Greece, Rome and Egypt can be both, yet are wonderful must-sees that never disappoint. The Great Barrier Reef and Grand Canyon both do what they say on the tin, and France — most of it, anyway (see below) — is Valhalla.

No, I am talking about another list, an itinerary of destinations that hold no appeal, not for any concrete reason but simply because it is almost impossible to imagine having a good time there. This may be because of over-popularity or cost, but for the most part it is because a certain kind of over-familiarity has bred a certain kind of contempt. These are places to which I have never travelled, and which I harbour no desire to visit. Their familiarity comes not from personal experience, but (in a few cases) from the experience of friends or, mostly, from the related experience of the multitudes who have decided, in the most lazy way, that these are places to go. These spots crop up time and again in the lazy travel supplements, in the litany of destinations favoured by the well-heeled and/or the under-imaginationed. Prime ministers, spin doctors and newspaper editors go there, as do successful holistic therapists and owners of leisure centres. When posh they are the haunts of Eurotrash, and when dowdy of just plain trash.

Just as I believe it is perfectly OK to judge a person by first appearances, a book by its cover and a bar by its name, it is surely just as all right to judge a place by its entry in the scruffy, ever-growing, hugely prejudiced and no doubt wholly inaccurate guidebook to the world that lodges in my brain.

Take Barbados, for example. You can take most of the Caribbean with it -those fancy French islands and that dreadful sounding place Princess Margaret used to go to. I have never been to Barbados and never will. Blair goes there on his holidays, as do successful car dealers from Greater Manchester, and retired comedians, media executives and tit-girls. Cliff Richard has a house there, for heaven's sake. Having written off most of the West Indies, I would make an exception for Jamaica, which legend says is crack-den-horrible, yet which, I have a sneaking suspicion, is actually quite jolly. Ditto Cuba and the one with the volcano.

Moving up the scale of horribleness comes Gstaad. I have no real idea what or where Gstaad is. It sounds like something corrective and sexual, but I assume it is one of those eye-wateringly nasty Swiss or Austrian ski resorts full of braying toffs trying to get laid. The common rich are a dreadful sight.

• The next two are controversial: Tuscany and Provence. I have actually been to Tuscany, albeit very briefly, and didn't see the point. I was poor, mind, and had no friends from whom to borrow a villa (why don't the rich and powerful own or rent their own bloody villas?), but even so. The place resembled a hot Surrey with even more traffic. Lucca was full, and Pisa was stuffed with aggressive touts selling bad sunglasses. I stayed on the coast in a resort which looked like a downmarket version of Great Yarmouth, with a beach that smelled of wee. Which you had to pay to get on. Just to the east is a place called Emilia Romagna, which is empty and wonderful and cheap, and is frequented by neither politicians nor their pressmen. Bologna is one of the most beautiful cities I have ever visited and seems to be entirely tourist-free. Why doesn't everyone go there instead?

'Don't bother with St Tropez,' a friend told me last year. 'Spent six hours trying to get in, couldn't park when we did and gave up.' He is right. Provence in the winter sounds rather lovely, and doesn't count, but in the summer it is too loathsome for words. Crowds, heat, £10 for a beer and snooty waiters. Why oh why does anyone bother? Monte Carlo even more so. Braindead racing drivers and yet more Russian tarts. Wrinkly, nylon-trousered taxavoiders and those fearsome orange women that crop up everywhere from the Costas to Jersey and the Isle of Man. People who wear deck shoes. Never been there. Never will. Sure I'm right, though.

Even worse: the Hamptons. I'm quietly confident that this stretch of the Long Island coast would make me shudder. The ten-hour traffic jams to get there on a Friday night. The crowds. The dreadful, vacuous parties with omega-list celebrities_ More tit-girls, this time American.

The truly exotic is probably to be avoided, for different reasons. The Seychelles, for instance. Nowhere can live up to a name like that, although the fact that it is

allegedly something of a socialist paradise intrigues. Tahiti and Fiji, ditto. I strive to avoid anywhere whose name is also a cocktail. I once made the mistake of going to Malibu, which has a pleasant beach but is about as glamorous and exciting as West Wittering. An exception must be made for Hawaii, which everyone knows is horrible (do they still garland you with flowers when you get off the plane? Please tell me they do), and in a contrarian way may therefore be a pleasant surprise. The Maldives are to be avoided too — a shimmer of green and turquoise, but what happens when it rains? Mauritius — retired French hoteliers and as naff as Barbados. Again, so I'm told.

Of course, life is too short to visit the truly beyond-the-pale. That awful place in Rhodes which has been in the news lately, and Eyebeetha: Gstaads for the poor. Blackpool, obviously. Although Skegness has a certain draw — nowhere can possibly live down to a name like that. Moving slightly upmarket, there is Rock which, despite knowing Cornwall well, I have never managed to find. I presume the Gstaad brigade go there, too.

What about Croatia? It's the new Tuscany, they say. Sorry, but as I have no desire to go to the old Tuscany, why should I want to go to the new one? Prague — full of saddo Americans. Minsk, Durres and Kishinev are probably too much hard work for now, but no one goes to Sofia, which is lovely, nor Plovdiv, which is even more so.

This little list of places not to go is the creation not of informed research and experience, but of blind prejudice, surmise and snobbery — both of the inverted and of the more traditional kind. If you enjoy any of these places and resent this intemperate attack on your taste, reassure yourself that at least you won't be running into me on your holidays.

Michael Hanlon is a staff writer on the Daily MaiL