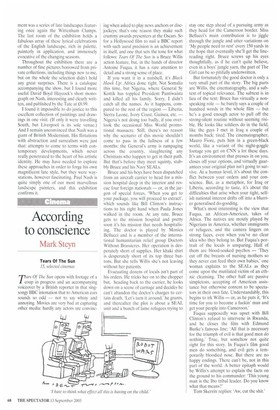 Tears Of The Sun 15, selected cinemas

TT ars Of The Sun opens with footage of a i_ coup in progress and an accompanying voiceover by a British reporter in that singsongy BBC intonation that to American ears sounds so odd — not to say whiny and annoying. Movies are very had at capturing other media: hardly any actors are convinc ing when asked to play news anchors or discjockeys; that's one reason they make such crummy awards presenters at the Oscars. So for a Hollywood film to nail a BBC report with such aural precision is an achievement in itself, and one that sets the tone for what follows: Tears Of The Sun is a Bruce Willis action feature, but, in the hands of director Antoine Fuqua, it has a rare attention to detail and a strong sense of place.

If you want it in a nutshell, it's Black Hawk Up: Africa done right. Not Somalia this time, but Nigeria, where General Sy Kottik has toppled President Pantiwaista and killed all his family. Sorry, I didn't catch all the names. As it happens, compared to the rest of the region — Liberia, Sierra Leone, Ivory Coast, Guinea, etc. — Nigeria's not doing too badly, if you overlook the occasional Miss World promotional massacre. Still, there's no reason why the scenario of this movie shouldn't come to pass in the fullness of a few months: the General's army is rampaging across the country, slaughtering any Christians who happen to get in their path. But that's before they meet squinty, stubbly Bruce and his Navy SEALs.

Bruce and his boys have been dispatched from an aircraft carrier to head for a mission hospital deep in the interior and rescue four foreign nationals — or, in the jargon of special forces, 'When you get to your package, you will proceed to extract', which sounds like Bill Clinton's instructions to his right hand when Paula Jones walked in the room. At any rate, Bruce gets to the mission hospital and pretty soon it's his mission that needs hospitalising. The doctor is played by Monica Bellucci and is a member of the international humanitarian relief group Doctors Without Brassieres. Her operation is desperately short of supplies. Her khaki shirt is desperately short of its top three buttons. But she tells Willis she's not leaving without her patients.

Evacuating dozens of locals isn't part of his orders. He tricks her on to the chopper but, heading back to the carrier, he looks down on a scene of carnage and decides he can't abandon the doctor's charges to certain death. 'Let's turn it around,' he grunts, and thereafter the plot is about a SEAL unit and a bunch of lame refugees trying to stay one step ahead of a pursuing army as they head for the Cameroon border. Miss Bellucci's main contribution is to jiggle through the jungle and utter variations on 'My people need to rest' every 150 yards in the hope that eventually she'll get the linereading right. Bruce screws up his eyes thoughtfully, as if he can't quite believe, even in a boys' jungle yarn, the part of The Girl can be so pitifully underwritten.

But fortunately the good doctor is only a very small part of the story. The big parts are Willis, the cinematography, and a subtext of topical relevance. The subtext is in lieu of the text: Bruce has virtually a nonspeaking role — he barely says a couple of hundred words in the whole film — but he's a good enough actor to pull off the strong-silent routine without seeming risible. He looks like soldiers do in the field, like the guys I met in Iraq a couple of months back: tired. The cinematographer, Mauro Fiore, puts him in a green-black world, like a variant of the night-goggle footage you get on CNN a lot these days. It's an environment that presses in on you, closes off your options, and virtually guarantees your original plan isn't going to survive. At a human level, it's about the conflict between your orders and your conscience. But, as a metaphor, for Iraq or Liberia, according to taste, it's about the difficulties that arise when your tight, selfish national interest drifts off into a blurrier generalised do-gooding.

What's most interesting is the view that Fuqua, an African-American, takes of Africa. The natives are mostly played by Nigerians in America, whether immigrants or refugees, and the camera lingers on strong faces, even when you've no clear idea who they belong to. But Fuqua's portrait of the locals is unsparing. Half of them are blood-soaked psychos — 'They cut off the breasts of nursing mothers so they never can feed their own babies,' one woman explains to the SEALs as they come upon the mutilated victim of an ethnic cleansing. The other half are passive simpletons, accepting of American assistance but otherwise content to be spectators in their own fate. Understandably, this begins to irk Willis — or, as he puts it, 'It's time for you to become a fuckin' man and get your people into Cameroon.'

Fuqua supposedly was upset with Bill Clinton's refusal to intervene in Rwanda, and he closes the film with Edmund Burke's famous line: 'All that is necessary for the triumph of evil is that good men do nothing.' True, but somehow not quite right for this story. In Fuqua's film good men do something, and evil gets a temporarily bloodied nose. But there are no happy endings. There can't be, not in this part of the world. A better epitaph would be Willis's attempt to explain the facts on the ground to his commander: 'This young man is the Ibo tribal leader. Do you know what that means?'