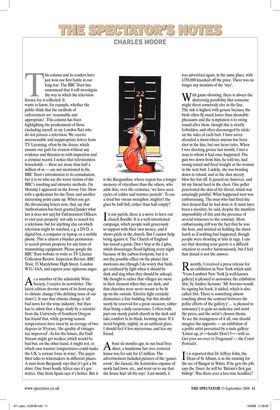 This column and its readers have just won our first battle in our long war. The BBC Trust has announced that it will investigate the way in which the television licence fee is collected. It wants to know, for example, whether the public think that the methods of enforcement are ‘reasonable and appropriate’. This column has been highlighting the predicament of those (including myself, in my London flat) who do not possess a television. We receive unreasonable and inappropriate letters from TV Licensing, often by the dozen, which assume our guilt for evasion without any evidence and threaten us with inspection and a criminal record. I notice that televisionless households — there are more than half a million of us — are not mentioned in the BBC Trust’s introduction to its consultation, but it is we who are the worst victims of the BBC’s insulting and intrusive methods. On Monday I appeared on the Jeremy Vine Show with a spokesman for the Trust, and another interesting point came up. When you get the threatening letters now, they say that ‘Authorisation has been granted [under what law it does not say] for Enforcement Officers to visit your property’ not only to search for a television, but for anything else on which television might be watched, e.g. a DVD, a digital box, a computer or laptop, or a mobile phone. This is almost a blanket permission to search private property for any form of transmitting equipment. Please google the BBC Trust website or write to TV Licence Collection Review, Inspection Review, BBC Trust, 35 Marylebone High Street, London W1U 4AA, and express your righteous anger.

As a member of the admirable Wine Society, I receive its newsletter. The latest edition devotes most of its front page to climate change (‘the defining issue of our times’). It says that climate change is ‘all bad news for the wine industry’, but then has to admit that a huge study by a scientist from the University of Southern Oregon has found that, while growing-season temperatures have risen by an average of two degrees in 50 years, ‘the quality of vintages has improved’. As for the future, the Gulf Stream might get weaker, which would be bad but, on the other hand, it might not, in which case warmer temperatures could make the UK ‘a serious force in wine’. The paper then talks to winemakers in different places. A man from Burgundy says that it’s got a bit drier. One from South Africa says it’s got wetter. One from Spain says it’s hotter. But it is the Burgundian, whose region has a longer memory of viticulture than the others, who adds that, over the centuries, ‘we have seen cycles of colder and warmer periods’. To use a tired but vinous metaphor, mightn’t the glass be half-full, rather than half-empty?

In our parish, there is a move to have our church floodlit. It is a well-intentioned campaign, which people wish generously to support with their own money, and it shows pride in the church. But I cannot help being against it. The Church of England has issued a guide, Don’t Stop at the Lights, which discourages flood-lighting every night because of the carbon footprint, but it is not the possible effect on the planet that motivates me (though I do worry that birds get confused by light when it should be dark and sing when they should be asleep). My thought is rather that villages are more in their element when they are dark, and that churches were never meant to be lit up on the outside. Electric light certainly dramatises a fine building, but this should surely be reserved for a great occasion, rather than being a daily occurrence. I often walk past our sturdy parish church in the dark and take comfort in its black, looming mass. If it stood brightly, nightly, in an artificial glare, I should feel it less mysterious, and less my friend.

About six months ago, in our local freesheet, a handsome but over-restored house was for sale for £3 million. The advertisement included pictures of the ‘games room’, the Jacuzzi, the featureless expanse of newly laid lawn, etc., and went on to say that the house had ‘all the toys’. Last month, it was advertised again, in the same place, with £350,000 knocked off the price. There was no longer any mention of the ‘toys’.

With game-shooting, there is always the distressing possibility that someone might shoot somebody else in the line. The risk is highest with grouse because the birds often fly much lower than shootable pheasants and the temptation is to swing round after them, though this is strictly forbidden, and often discouraged by sticks on the sides of each butt. I have never attended a shoot where anyone has been shot in the line, but one hears tales. When I was shooting grouse last month, I met a man to whom it had once happened. The gun two down from him, he told me, had swung round and fired straight at the woman in the next butt. Luckily, she was bending down to reload, and so the shot merely blew her hat off. It passed on, however, and hit my friend hard in the chest. One pellet penetrated the skin of his throat, which was amazingly painful. What happened next was embarrassing. The man who had fired the shot denied that he had done it. It must have been a ricochet, he said, despite the manifest impossibility of this and the presence of several witnesses to the contrary. More embarrassing still was the fact that he was the host, and insisted on holding the shoot lunch as if nothing had happened, though people were shouting at him in rage. I can see that shooting your guests is a difficult situation to resolve harmoniously, but I feel that denial is not the answer.

Recently, I received a press release for an exhibition in New York which said: ‘Yvon-Lambert New York [a well-known gallery] is pleased to announce the exhibition Shit, by Andres Serrano.’ Mr Serrano would be signing his book, it added, which is also called Shit. There is something almost touching about the contrast between the polite efforts of the gallery (‘... is pleased to announce’) to gain an audience and assist the press, and the artist’s chosen theme. To see the strangeness of it all, one should imagine the opposite — an exhibition of a polite artist presented by a rude gallery: ‘Listen up, d***heads! Don’t f*** with us. Get your ass over to Fragonard — the Court Portraits’.

It is reported that Dr Jeffrey John, the Dean of St Albans, is in the running for the see of Bangor in Wales. If he gets the job, says the Times, he will be ‘Britain’s first gay bishop’. Was there ever a less true headline?