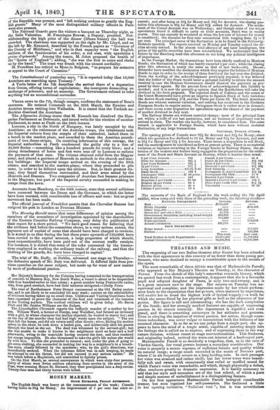 Page 9, 14 April 1849 — Her Majesty's Secretary for the Colonies having consented to the
Close

Her Majesty's Secretary for the Colonies having consented to the

transportation of convicts to Moreton Bay, New South Wales a vessel is about to be despatched with four hundred exiles to that colony; a great number being Pentonville exiles, who, from good conduct, have had their sentence mitigated.—Daily News.

The trial of Bartholomew Peter Drouet commenced at the Old Bailey yester- day, and is not likely to be concluded till next week; contest on the admissibility of evidence having taken up no small time. Children and Visiting Guardians have been examined to prove the character of the food and treatment of the inmates at the Tooting asylum. The medical evidence will be given today. Mr. Baron Platt and Mr. Justice Williams are the Judges.

The Lincolnshire Chronicle reports the rafflanly murder of a mother by her son. William Ward, a farmer at Thorpe, near Wainfleet, had formed an intimacy with a girl, to whose character the mother objected; he wanted to marry her; and on the day of the murder they had had high words upon the subject. "The son than left the house, and did not return until after dinner; when, finding his mother asleep in the chair, he took down a loaded gun, and deliberately shot his parent through the head as she sat. The deed was witnessed by the servant-girl; but she was enable to make it known to the neighbours until an hour and a half afterwards, owing to the matricide having secured the door, and thus rendered her escape impossible. He also threatened to take the girl's life unless she would fly with him. To this she pretended to consent; and, under the plea of going to get some clothing, she succeeded in making her way to a neighbour's in a breath- less state, closely followed by the murderer; who, by the girl's directions, was immediately secured. When the inhuman fellow was in safe keeping, he made an attempt to cut his throat, but did not succeed to any serious extent." He was taken before a Magistrate, and committed to Spilsby prison.

On the 31st March, as several conveyances in which were sixty-four persons, thirty of whom were Swiss soldiers returning from service in the army of the Pope, were crossing Mount St. Bernard, they were precipitated into a deep ravine. Twenty-four men and thirty horses were killed.