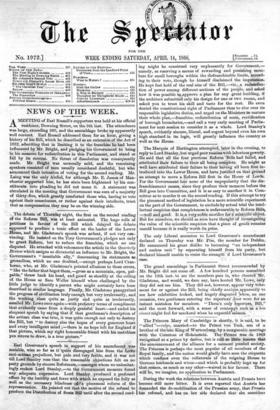 The grand assemblage in Parliament Street recommended by Mr. Bright

did not come off. A few hundred persons assembled on the 12th inst. to see the members pass in, who cheered Mr. Gladstone, and would, we dare say, have hooted Mr. Lowe, only they did not see him. They did not, however, appear very vehe- ment for or against the Bill, being chiefly anxious apparently to see how celebrities looked, and hugely disgusted 'when, on one occasion, two gentlemen entering the reporters' floor were for an instant mistaken for members. " Them's only reporters, Bill," said the most forward, with a sense of contempt such as a bon vivant might feel for mackerel when he expected salmon.