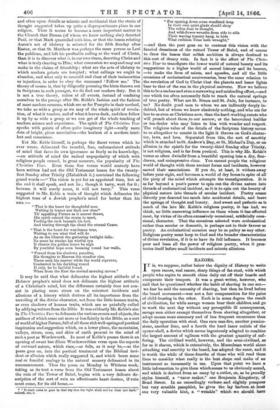 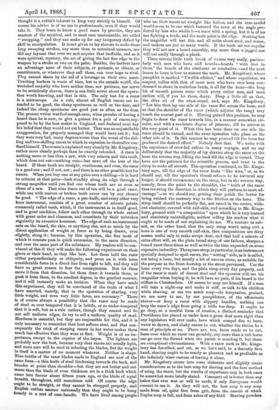 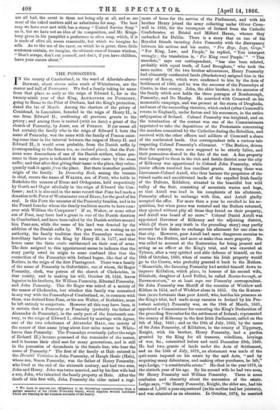 we suppose, rather below the dignity of History to write

who use their razors set straight like knives, and the true model would seem to be one which fastened the razor at the angle pre- ferred-by him who wields it—a razor with a spring, but it is of no use fighting a trade, and the main point is the edge. Nothing but the magnifier will test tide, and all oaths about steel, and water, and makers are just so many words. If the teeth are not regular they will not saw a beard smoothly, any more than a jagged saw will out easily through a plank.

These minute little teeth break of course very easily, particu- larly with men who have stiff beards—beards "with iron in them," the beards of the obstinate or combative—and the next lesson to learn is how to restore the teeth. Mr. Kingsbury, whose pamphlet is marked "Twelfth edition," and whose experience, we suspect, tallies with that of most men who have ever been con- demned to shave in cutlerless lands, is all for the hone—the long bit of smooth porous stone which every cutler uses, and most cutlers will, if you let them, decry. Drop a little oil on that, the olive oil of the cruet-stand, and, says Mr. Kingsbury, "Let him then lay one side of" the razor flat across the hone, and so that the shoulder of the razor (which adjoins the tang) may touch the nearest part of it. Having gained this position, he may begin to draw the razor towards him, in a manner somewhat cir- cular, and witha moderate degree of pressure, till he arrives at the very point of it. When this has been done on one side the razor should be turned, and the same operation take place on the other side of it. In this manner he may proceed till the hone has produced the desired effect." Nobody does that. We write with the experience of crowded cabins in many voyages, and we say deliberately that the majority of lay shavers strop the razor on the hone the reverse way,lifting the back till the edge is turned. They have not the patience for the scientific process, and trust to the strop to make all smooth. This operation continued, as Mr. Kings- bury says, till the edge of the razor looks "like wire," or, as we should say, till the operator's thumb refuses to be tortured any longer, it should recommence on the strop, but in the reverse way, namely, from the point to the shoulder, the "teeth of the razor thus receiving the direction in which they will perform to most ad- vantage "—as we should say, getting their polish the better for being rubbed the contrary way to the friction on the hone. The strop itself should be perfectly fiat, not raised in the centre, with- out elasticity, covered with calf-skin, and according to Mr. Kings- bury, greased with "a composition" upon which he is very learned and absolutely unintelligible, neither telling his readers what it ought to be made of nor explaining its use. We venture to sub- mit, on the other hand, that the only strop worth using with a hone is one of very smooth calf-skin, that compositions are dirty messes useful only to make strops dear, and that half a minute of extra effort will, on the plain broad strop of our fathers, sharpen a honed razor three times as well as twice the time expended on some expensive imbecility. The square strop, in particular, is an instrument specially designed to spoil razors, the "setting" side, as it is called, not being a hone, but usually a bit of uneven stone, as suitable for the purpose as the front doorstep or the street pavement. Use the lone every two days, and the plain strop every day properly, and if the razor is made of decent steel and the operator will use his magnifier when buying it, he will have no pain:, if his beard is the stiffest in Christendom. Of course he may out himself. If a man will take a night-cap and make it stiff, or talk to his children while shaving, or use too much soap—the temptation, praised, we are sorry to see, by our pamphleteer, of the effeminate shaver—or keep a razor with slippery handles, nothing can keep the razor's edge from going a trifle too deep. It ought to go deep, as a needful form of suasion, a distinct reminder that Providence has placed us under laws a great deal more rigid than any legislators will ever make, laws which compel fire to burn, water to drown, and shaky razors to cut, whether the victim be a man of principle or no. There are, too, faces made to be cut, faces over which no razor can go safely, any more than a cab horse can go over the Strand when the parish is mending it, but these are exceptional circumstances. With a razor such as Mr. Kings- bury -has described, and set, as we have said, in a decently firm hand, shaving ought to be nearly as pleasant and as profitable as the infinitely wiser custom of leaving it alone.

Mr. Kingsbury enters into some elaborate and slightly comic considerations as to the best soap for shaving and the best method of using the razor, but the results of experience may in both cases be somewhat more briefly stated. Cocoanut oil is better than any lather that ever was or will be made, if only Europeans would consent to use it. As they will not, the best soap is any soap made from oil, quite free from grit, from the caustic of which Naples soap is full, and from ashes of any kind. Shaving powders are all bad, the scent in them not being oily at all, and so are most of the caked matters sold, as substitutes for soap. The best soap we have ever met with has a stamp "United Service Soap" on it, but we have not an idea of its composition, and Mr. Kings- bury gives in his pamphlet a preference to olive soap, which, if it is made of olive oil, seems reasonable, but which we imagine he sells. As to the use of the razor, on which he is great, three little sentences contain, we imagine, the ultimate sum of human wisdom, "Don't scrape, don't cut yourself, and don't, if you have children, leave your razors about."