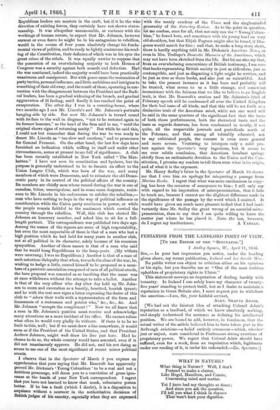 — In your last impression you notice, under the heading given above, my recent publication, Ireland and her Servile 1Var.

No public writer can object to criticism either on his opiuims or his style, but you describe me as "One of the most ruthless upholders of proprietary rights in Ulster."

This statement conveys an imputation of dealing harshly with tenantry. In Ireland I can safely leave my character of twenty- five years' standing to protect itself, but as I desire to maintain a reputation in Great Britain also, I must request you to withdraw the assertion.—I am, Sir, your faithful servant,

[We had not the faintest idea of attacking Colonel Adair's reputation as a landlord, of which we know absolutely nothing, and simply understood the sentence as defining his intellectual position. We are bound to add, however, in frankness, that the actual writer of the article believed him to have taken part in the .Ardveagh evictions—a belief entirely erroneous—which, whether' just or unjust, were considered in Parliament strong exertions of proprietary power. We regret that Colonel Adair should have suffered, even for a week, from an imputation which, legitimate under our reading of it, is under his unfounded.—En. Spectator.]