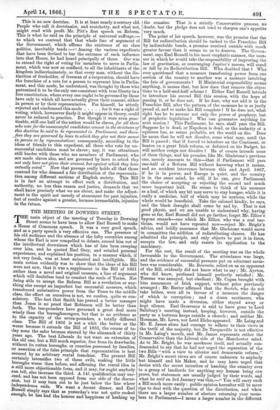 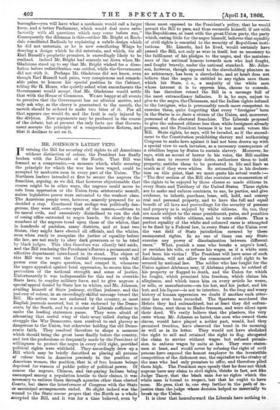 Int MEETING IN DOWNING STREET. T HE main object of the

meeting of Tuesday in Downing Street seems to have been to allow Earl Russell to make a House of Commons speech. It was a very good speech, and as a party speech a very effective one. The presence of his old audience and the absence of the lofty serenities among whom the Earl is now compelled to debate, roused him out of the intellectual drowsiness which has of late been creeping -over him, and he quoted Earl Grey, and retailed personal experiences, and explained his position, in a manner which, if not very fresh, was at least animated and intelligible. His main notion evidently was to show that the ideas of his Bill were not new, that it was a supplement to the Bill of 1831 rather than a novel and original mea:sure, a line of argument which will doubtless tend to comfort the souls of Tories. Not being able to accept the Reform Bill as a revelation or any- thing else except an imperfect but successful measure, which transferred substantive power from the Peers to the middle class, the effect on ourselves is not, we confess, quite so con- solatory. The fact that Smith has proved a better manager than Jones is no proof that Robinson will be better than both. The ten-pounders have governed a great deal more wisely than the boroughmongers, but that is no evidence as to the capacity of the seven-pounders, a totally different -class. The Bill of 1866 is not a whit the better or the worse because it extends the Bill of 1831, the course of to- 'day none the safer because steered by the almanack of thirty _years ago. The best Liberals do not want an .extension of the old one, but a Bill much superior, free from its drawbacks, without its rotten boroughs, or counties possessed by families, or assertion of the false principle that representation is best .secured by an arbitrary rental franchise. The present Bill -certainly intensifies two of these evils, making the little boroughs worse than before, and affirming the rental idea in a still more objectionable form, and it may, for aught anybody -can tell, also increase the third. A 14/. qualification may sue- -eked, and has not been opposed from our side of the discus- sion, but it may turn out to be just below the line where independence ends. We want a decent dinner, and Earl _Russell simply says that as yesterday's was not quite cooked enough, he has had the honour and happiness of hashing up the remains. That is a strictly Conservative process, no doubt, but the pledge does not tend to sharpen one's appetite very much.

The point of his speech, however, was the promise that the Bill for redistribution should be tacked to the Franchise Bill by indissoluble bonds, a promise received outside with much greater favour than it seems to us to deserve. The Govern- ment, says Earl Russell in his most emphatic manner, the man- ner in which he would take the responsibility of improving the law of gravitation, or rearranging Jupiter's moons, will stand or fall by its Redistribution Bill. Who doubted that Who ever questioned that a measure transferring power from one section of the country to another was a measure involving the fate of governments If Ministerial responsibility means anything, it means that, but how does that remove the objec- tions to a half-and-half scheme ? Either Earl Russell intends to introduce his second Bill this session, with the hope of passing it, or he does not. If he does, why not add it to the Franchise Bill, after the pattern of the measure he is so justly proud of, and so make his Bill complete ? If he does not, what right has he to assume not only the power of prophecy, but of prophetic legislation ? Who can guarantee anything for next session ? This Parliament, he says, shall pass the Bill. Suppose he is dead, or Napoleon is dead, or the audacity of a squireen has, as seems probable, set the world on fire. Does he mean that he will not dissolve, come what may, until the Bill is passed ; that if forced to interfere on the Continent, or beaten on a great Irish reform, or defeated on his Budget, he will neither resign nor dissolve He of course intends none of these things, and his promise, like Mr. Gladstone's previous one, merely amounts to this—that if Parliament will pass one-half of a Reform Bill without knowing what it means, and no accident intervenes between this and April, 1867, if he is in power, and Europe is quiet, and the country is in the same mind, he will, if he can, give Parliament the choice of accepting or rejecting the second and much more important half. He seems to think of his measure as a loaf, of which any bit may serve to stay hunger, while it is really a medicine, half of which may be noxious, while the whole would be beneficial. Take the calomel kindly, he says, and the black draught shall come by and by. That is not good physic, and we are unable to understand why, having gone so far, Earl Russell did not go farther, forget Mr. Ellice's bygone remark—one which Mr. Ellice, who was a real tac- tician, would not have repeated now—reject Mr. Bright's advice, and boldly announce that Mr. Gladstone would move in committee the addition of redistributing clauses. He has admitted the principle, and only objects to put it in force, accepts the law, and only resists its application to the machinery.

For the rest, the result of the meeting was on the whole favourable to the Government. The attendance was large, and the evidence of successful pressure put on reluctant mem- bers was considerable. Mr. Bouverie, relied on as an opponent of the Bill, evidently did not know what to say ; Mr. Ayrton, who did know, professed himself perfectly satisfied ; Mr. Torrens was annoyed, but obedient ; Mr. Cogan brought with him assurances of Irish support, without price previously arranged ; Mr. Baxter affirmed that the Scotch, who do not take bribes, were all in favour of a measure the danger of which is corruption ; and a dozen mutineers, who might have made a diversion, either stayed away or kept silence. Earl Grosvenor is said to have gone to Lord Salisbury's meeting instead, keeping, however, outside the party as a buttress keeps outside a church ; and neither Mr. Horsman, Mr. Lowe, nor Lord Elcho appeared. Mr. Laing and Mr. E. James alone had courage to adhere to their views in the teeth of the majority, but De Tocqueville is not effective in Mr. Laing's mouth, and Mr. James represents rather the Conservative than the Liberal side of the Manchester mind. As to Mr. Bright, he was meekness itself, and actually con- descended to say that he had not urged the separation of the two Bills "with a view to ulterior and democratic reform." Mr. Bright's secret views are of course unknown to anybody but himself and his Maker, and he may have urged that device with the secret intention of handing the country over to a group of landlords for anything any human being can prove, but statesmen are usually judged by their words, ancl what he said on 3rd January was this,—" You will carry such a Bill much more easily : public opinion hereafter will be more ripe to deal with the question of the distribution, and when there are a larger number of electors returning your mem- bers to Parliament—I mean a larger number in the different boroughs—you will have what a mechanic would call a larger lever, and.a better Parliament, which would deal more satis- factorily with all questions which may come before you." Consequently the dilemma is this—either Mr. Bright at Roch- dale conciliated Radicals by explaining a subtle design which he did not entertain, or he is now conciliating Whigs by denying a design which he did entertain, and which, for all Earl Russell's prophetic promises, is exceedingly likely to be realized. Indeed Mr. Bright had scarcely sat down when Mr. Gladstone stood up to say that Mr. Bright wished for a disso- lution before redistribution was settled, while the Government did not wish it. Perhaps Mr. Gladstone did not know, even though Earl Russell took pains, very conspicuous and remark- able pains, to honour his special position iii the Cabinet, telling Sir H. Hoare, who quietly asked what amendments the Government would accept, that Mr. Gladstone would settle that with the House of Commons. We are happy at all events to perceive that the Government has no ulterior motive, and only ask why, as the cherry is guaranteed to the month, the month should be ordered to make two bites of it. For all that appears one would do, and the fruit is only injured by the division. New arguments may be produced in the course of the debate, but at present the only facts are that Govern- ment accepts the principle of a comprehensive Reform, and that it declines to act on it.