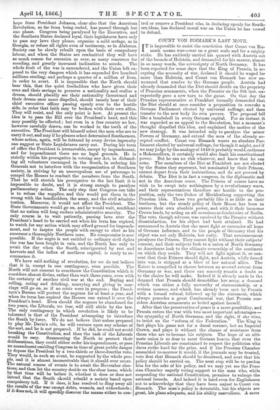 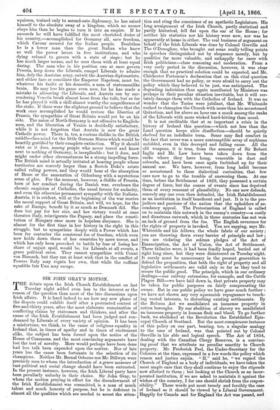 I T i impossible to resist the conviction that Count von Dis- mark means war—war on a great scale and for a mighty stake. He has suddenly carried his quarrel with Austria out of the bounds of Holstein, and demanded for his master, almost in so many words, the sovereignty of North Germany. It has been reported for some days that the King of Prussia, in ac- cepting the necessity of war, declared it should be waged for more than Holstein, and Count von Bismark has now an- nounced that resolve to the German people. Austria had already demanded that the Diet should decide on the propriety of Prussian armaments, when the Premier on the 9th inst. un- expectedly gave a new turn to the game. On that day the Prussian representative at Frankfort formally demanded that the Diet should at once consider a proposition to convoke a German Parliament elected by universal suffrage, and then transfer to the new body its own powers. The proposal fell like a bombshell in every German capital. For an instant it was regarded as an appeal to the Revolution, but a moment's thought dispelled this idea, and explained the motive of the new strategy. It was intended only to paralyze the minor Powers of Germany, and extend the area of the already ac- cepted conflict. Count von Bismark wants no absolute Par- liament elected by universal suffrage, for though it might, and if we may judge by the analogy of 1848 it probably would, enthrone a Hohenzollern, it certainly would also limit his constitutional power. But he ran no risk whatever, and knew that he ran none. The members of the Diet at Frankfort are not elected by the States they represent, but nominated by their Princes, cannot depart from their instructions, and do not proceed by debate. The Diet is in fact a congress, in the diplomatic and not in the American sense. The Princes of course have no wish to be swept into nothingness by a revolutionary wave, and their representatives therefore are hostile to the pro- position, only the two Dukes of Mecklenburg supporting the Prussian idea. Those two probably like it as little as their brethren, but the steady policy of their House has been to ensure their own absolute power, and with it their immense Crown lands, by acting on all occasions as feudatories of Berlin. The vote, though adverse, was received by the Premier without dissatisfaction, for his object had been attained. He had announced to Austria that she must fight or surrender all hope of German influence, and to the people of Germany that his object was not only Holstein, but unity. That announcement paralyzes the Princes. They cannot fight without their subjects' consent, and their subjects look to a union of North Germany as Americans look to the ultimate ownership of the continent on which they reside. They will not fight against it, or con- sent that their Princes should fight, and Austria, while forced into war, is stripped at a blow of her natural allies. The Kaiser is compelled to choose between an avowed retreat from Germany or war, and there can scarcely remain a doubt as to the choice he will make. Indeed it is already made in the demand that Prussia should demobilize her army, a demand which was either a folly unworthy of statesmanship, or a serious menace, and which has already been met by Prussia with a formal refusal, followed up by the statement, which always precedes a great Continental war, that Prussia con- siders Austrian armaments as levied against herself.

After that the preservation of peace is a mere possibility, and Prussia enters the war with two most important advantages— the sympathy of North Germans, and the right, if she wins,

to insist on the "reform of the Federation." The King in

fact plays his game not for a ducal coronet, but an Imperial Crown, and plays it without the chance of resistance from those who are to become his subjects. The hope of an ulti- mate union is so dear to most German hearts, that even the Prussian Liberals are constrained to respect the politician who dares strike hard for the prize, and if the Prussian Chamber assembled to-morrow it would, if the journals may be trusted, vote first that Bismark should be dismissed, and next that his policy should be carried on. The next step will be to pardon him for the sake of his policy, and we may yet see the Prus- sian Chamber eagerly voting support to the man who, while suspending the national Constitution, promises to enlarge the national bounds. And indeed it is hard even for Englishmen not to acknowledge that they have been unjust to Count von

Bismark. The man's policy is detestable, but his objects are great, his plans adequate, and his ability-marvellous. A mere squireen, trained only to second-rate diplomacy, he has raised himself to the absolute sway of a kingdom, which no sooner • obeys him than he begins to turn it into an empire. If he succeeds he will have fulfilled the most cherished desire of his country,—accomplished for Germany all, save freedom, which Cavour secured for the Italian people. Doubtless he is a lower man than the great Italian who knew so well the power latent in free institutions, and who dying refused to govern with a state of siege ; but he has much larger means, and he uses them with at least equal daring. The man who in his position can at once govern Prussia, keep down the Liberals, compel Liberals to admire him, defy the Austrian army, outwit the Austrian diplomatists, and either face or conciliate the Emperor Napoleon, must be, whatever his faults or his demerits, a man of statesmanlike brain. He may lose his game even now, for he has made a mistake in alienating the Liberals, and Austria can by sur- rendering Venetia break almost loose from the toils, but so far he has played it with a skill almost worthy the magnificence of the stake. If there were the slightest ground to believe that the work once accomplished he would restore the liberties of Prussia, the sympathies of Great Britain would yet be on his side. The union of North Germany is not offensive to English- men, and the liberation of Venice is decidedly satisfactory, while it is not forgotten that Austria is now the great Catholic power. There is, too, a curious dislike in the British middle-class mind for the little German States which would be heartily gratified by their complete extinction. Why it should exist as it does, among people who never travel and know next to nothing of Germany, is inexplicable ; but it does, and might under other circumstances be a strong impelling force. The British mind is actually irritated at hearing people whose territories are scarcely larger than a Scotch Duke's estate called ruling powers, and they would hear of the absorption of Hesse or the annexation of Oldenburg with a mysterious sense of glee. For the moment, however, a dislike of Prussia, born of her conduct during the Danish war, overbears the chronic suspicion of Catholics, the usual favour for audacity, and even the otherwise permanent sympathy with the Italians. Austria, it is evident, will at the beginning of the war receive the moral support of Great Britain, and will, we hope, for the sake of Europe, benefit by it as much as Denmark did. She does but pay for her sins, and her victory would at once threaten Italy, reinvigorate the Papacy, and place the consti- tution of Hungary once more in hopeless abeyance. She is almost for the first time in her history in the right in this struggle, but to sympathize deeply with a Power which has been for centuries the consistent foe of freedom, which even now holds down three of her countries by mere terror, and which has only been provoked to battle by fear of losing her share of unjust spoil, would be, for Liberals at all events, a grave political error. They cannot sympathize with Count von Bismark, but they can at least wish that in the conflict of Powers Italy may regain her own, that while the ruffians squabble fair Una may escape.