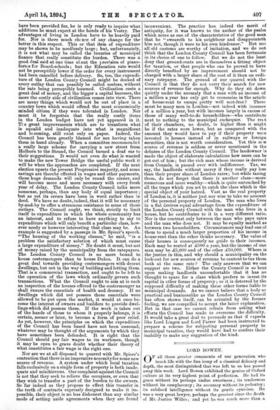 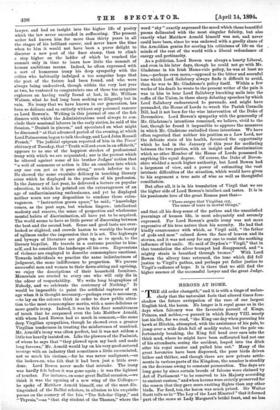 OF all those greater ornaments of our generation who touch life with the fine irony of a classical delicacy and depth, the most distinguished that was left to us has passed away this week. Lord Bowen exhibited the genius of Oxford culture at its very highest point of perfection. He had its grace without its perhaps undue sweetness ; its tenderness without its complacency ; its accuracy without its pedantry ; its subdued intelligence without its gentle cynicism. He was a very great lawyer, perhaps the greatest since the death of Mr. Justice Willes ; and yet he was much more than a

lawyer, and had an insight into the higher life of poetry which the law never succeeded in suffocating. The present writer had known him for more than thirty years in all the stages of his brilliant career, and never knew the time when to him it would not have been a purer delight to discover a new poet of the finer stamp, than to climb a step higher on the ladder of which he reached the summit only in time to learn how little the summit of human ambitions means. Indeed, he often expressed with a sort of humorous irony his deep sympathy with the critics who habitually indulged a too sanguine hope that the poet of the future had been found, and who were always being undeceived, though within the very last year or two, he ventured to congratulate one of these too sanguine explorers on having really found at last; in Mr. William Watson, what he had long been seeking so diligently but in vain. No irony that we have known in our generation, has been so delicate and so entirely without any poisoned rancour as Lord Bowen's. Writing in this journal of one of the fish dinners with which the Administrations used always to con- clude their sessional labours in the early sixties, he said of the Session, " Desinit in piscem," and speculated on what might be discussed " at that advanced period of the evening, at which Lord Palmerston began to talk theology, and Lord John Russell

French." The judicial epigram reported of him in the Times' obituary of Tuesday, that " Truth will out even in an affidavit," appears to us one of the happiest strokes of professional -irony with which we are acquainted; nor is the protest which he uttered against some of his brother Judges' notion that " a writ of summons or action is like an omnibus into which any one can get as it goes along," much inferior to it. He showed the same exquisite delicacy in touching literary error which he displayed in the practise of his profession. In the January of last year, he delivered a lecture on popular education, in which he pointed out the extravagances of an age of undiscriminating enthusiasms, and yet he displayed neither scorn nor any disposition to condone those extra- vagances. " Instruction grows apace," he said ; " knowledge comes, as the poet says, but wisdom lingers; intellectual modesty and reserve, the sense of proportion and wholesome mental habits of discrimination, all have yet to be acquired. The world seems to have so little power of discerning between the best and the second best. Sense and good taste are over- looked or slighted, and crowds hasten to worship the beauty of ugliness under the impression that it is art. The highways and byways of literature are given up, so to speak, to the literary bicyclist. He travels in a costume peculiar to him- self, and he considers the landscape all his own. Expressions of violence are employed to describe commonplace emotions. Towards individuals we practise the same indistinctness of judgment, the same indifference to proportion. We pursue successful men and women to their down-sitting and uprising, we enjoy the descriptions of their household furniture. Memorials are erected to every one who will only die in the odour of respectability. We write long biographies of Nobody, and we celebrate the centenary of Nothing." It would be impossible to paint the artificial raptures of an age when it is thought necessary,—perhaps even is necessary, —to lay on the colours thick in order to draw public atten- tion to the moat commonplace merits, with a more delicious or more gentle irony. Indeed, it was in this finer sensitiveness of touch that he surpassed even the late Matthew Arnold, with whom Lord Bowen had so much in common,—the same deep Virgilian sympathies, though he showed even a greater Virgilian tenderness in treating the misfortunes of mankind. Mr. Arnold's irony was often perfect, but it was not seldom a little too heavily insisted on. Like the plovers of the Psalmist, of whom he says that "they plowed upon my back and made long furrows," Mr. Arnold would lay on his very good-natured scourge with an industry that sometimes a little excruciated, not so much his victims,—for he was never malignant,—as the lookers-on, who felt that it had been just a little over- done. Lord Bowen never made that mistake. The irony was hardly felt before it was gone again ; it was the lightest of touches. For instance, on some great Balliol occasion,—we think it was the opening of a new wing of the College,— he spoke of Matthew Arnold himself, one of the most dis- tinguished of the Balliol scholars, in allusion to his exquisite poems on the scenery of the Isis, "The Scholar Gipsy," and " Thyrsis,"—as "that shy student of the Thames," where the

word " shy " exactly expressed the mood which those beautiful poems delineated with the most singular felicity, but also exactly what Matthew Arnold himself was not, and never could have been, since he was endowed with a goodly share of the Arnoldian genius for scoring his criticisms of life on the minds of the rest of the world with a liberal redundance of energy and pertinacity.

As a politician, Lord Bowen was always a hearty Liberal, and even in his later days, though he could not go with Mr. Gladstone in his Irish Home-rule policy, he was at least no less,—perhaps even more,—opposed to the bitter and scornful tone which Lord Salisbury always finds it difficult to avoid, than he was to Mr. Gladstone's policy itself. Within a few weeks of his death he wrote to the present writer of the pain it was to him to hear Lord Salisbury knocking nails into the coffin of the Union, in those sharp debating speeches by which Lord Salisbury endeavoured to persuade, and might have persuaded, the House of Lords to wreck the Parish Councils Bill, had it not been for the wise intervention of the Duke of Devonshire. Lord Bowen's sympathy with the generosity of Mr. Gladstone's intentions remained, we believe, vivid to the last, though he found it impossible to approve the measures in which Mr. Gladstone embodied those intentions. We have often regretted that neither his position as a Law Lord, nor the delicate state of his health, favoured the opportunity which he had in the January of this year for mediating between the two parties, with an insight and discrimination which no other Member of the House of Lords possessed in anything like equal degree.. Of course, the Doke of Devon- shire wielded a much higher authority, but Lord Bowen had a largeness of view, and a power of estimating the vast intrinsic difficulties of the situation, which would have given to his argument a true note of wise as well as thoughtful conciliation.

But after all, it is in his translation of Virgil that we see the higher side of Lord Bowen's intellect and tastes. It is in his passionate love of the great Roman poet that—

"There surges that Virgilian cry, The sense of tears in mortal things," and that all his deep sense of the pathos and the unsatisfied yearnings of human life, is most adequately and serenely expressed. For Lord Bowen's gentle irony was not more expressive of his true nature than his serenity. He had that kindly countenance with which, as Virgil said, " the father of gods and men" calmed down the face of heaven and its storms, and it was not easy for any one to resist the soothing influence of his smile. He said of Dryden's " Virgil," that in that translation the silver trumpet had disappeared, and "a mighty strain is breathed through bronze." With Lord Bowen the silvery tone returned, the tone which did fall justice to Virgil's pathos, and perhaps yet fuller justice to Virgil's radiance of hope. It is there that we still find the higher essence of the successful lawyer and the great Judge.