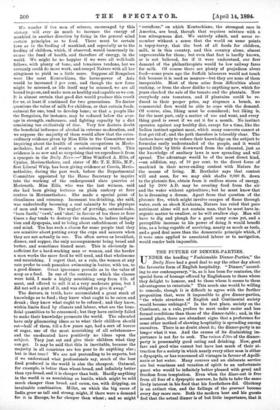 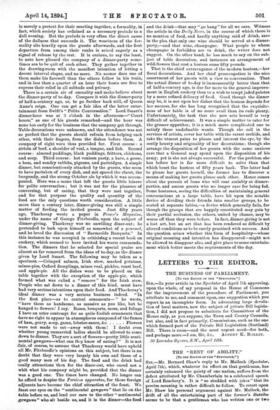 THE FUTURE OF DINNER-PARTIES.

UNDER the heading " Fashionable Dinner-Parties," the Daily News had a good deal to say the other day about the favourite form of English hospitality. " Dinner," accord- ing to our contemporary, " is, as it has been for centuries, the special form of homage offered by Englishmen to those whom they delight to honour, and to those whom it seems to them advantageous to entertain." This much one would be willing to concede, though it is difficult to agree with the further proposition that, were it impossible to give dinner-parties, "the whole structure of English and Continental society would become unhinged." In the first place, society on the Continent, as a rale, prefers to meet under easier and less formal conditions than those of the dinner-table ; and, in the second place, there are abundant signs that a preference for some other method of showing hospitality is spreading among ourselves. There is no doubt about it; the dinner-party is no longer what it was. And the causes of its diminishing im- portance is not far to seek. The raison d'etre of the dinner- party is presumably good eating and drinking. Now, good fare and good wine cannot but have lost much of their at- traction for a society in which nearly every other man is either a dyspeptic, or has renounced all vintages in favour of Apolli- naris or hot water. Many courses and an elaborate service are but weariness and vexation of spirit to an unfortunate guest who would be infinitely better pleased with gruel, and freedom from temptation. Even when the diner-out is free from all fear of a dyspeptic morrow, he fails to take the same lively interest in his food that his forefathers did. Gluttony is an extinct vice, and the failings of the gourmet become every day more rare. Both the modern host. and his guests feel that the actual dinner is of but little importance, that it

is merely a pretext for their meeting together, a formality, in fact, which society has ordained as a necessary prelude to a dull evening. Bat the prelude is very often the direct cause of the dullness that succeeds it. The weariness of the for- mality sits heavily upon the gaests afterwards, and the first departure from among their ranks is seized eagerly as a signal of release by the rest. It is carious, to say the least, to note how pleased the company of a dinner-party some- times are to be quit of each other. They gather together in the drawing-room with the manifest intention of letting a decent interval elapse, and no more. No sooner does one of them make his farewell than the others follow in his train, and in less than a quarter of an hour their hosts are free to express their relief in all solitude and privacy.

There is a certain air of unreality and make-believe about the dinner-party of to-day. Compare it with the dinner-party of half-a-century ago, or, to go further back still, of Queen Anne's reign. One can get a fair idea of the latter enter- tainment from Swift's "Polite Conversation." Lord Smart's dinner-hour was at 3 o'clock in the afternoon—" Court hours," as one of his guests remarked—and the hour was none too early for the business that the company got through. Table-decorations were unknown, and the attendance was not so perfect that the guests should refrain from helping each other, with their fingers, from the dishes before them. A company of eight were thus provided for. First course : a sirloin of beef, a shoulder of veal, a tongue, and fish. Second course : almond puddings, black puddings, fritters, chickens, and soup. Third course: hot venison pasty, a hare, a goose, a ham, and sundry rabbits, pigeons, and partridges. A simple dinner, but conscientiously attacked by the guests, who seem to have partaken of every dish, and not spared the claret, the burgundy, and the strong October ale by which it was accom- panied. Here was a menu that left the guests little leisure for polite conversation ; but it was not for the pleasure of conversing, but of eating, that they were met together, and for that purpose the quality and quantity of the food are the only questions worth consideration. A little more than a century later, dinner-giving was still a simple matter of feeding the invited guests. Just fifty years ago, Thackeray wrote a paper in Fraser's Magazine, under the name of George Fitzboodle, upon the subject of dinner-giving. Thackeray was no unwilling diner-out ; he pretended to look upon himself as somewhat of a gourmet, and he loved the discussion of " Barmecide Banquets." In this instance he was occupied in criticising a recent book on cookery, which seemed to have invited his warm commenda- tion. The dinners that he selected for special praise are almost as far removed from the ideas of to-day, as the dinner given by Lord Smart. The following may be taken as a specimen :—Crimped salmon, Irish stew, mashed potatoes, mince-pies, Oxford dumplings, mince veal, pickles, roast beef, and apple-pie. All the dishes were to be placed on the table together with the exception of the apple-pie, which formed what was called a " remove " for the Irish stew. People who sat down to a dinner of this kind, must have had very serious intentions upon their food. And Thackeray's ideal dinner was a very serious business indeed. "In the first place—as to central ornaments— " he wrote, 'C have them as handsome, as massive as you like, but be hanged to flowers ! I say. Roses, bouquets, moss, and foliage I have an utter contempt for as quite foolish ornaments that have no right to appear in atmospheres composed of the fames of ham, gravy, soup, game, lobster-sauce, &c Flowers were not made to eat—away with them ! I doubt even whether young unmarried ladies should be allowed to come down to dinner. They are a sort of flowers—pretty little senti- mental gewgaws—what can they know of eating P" It is not lair, of course, to assume that Thackeray would have upheld all Mr. Fitzboodle's opinions on this subject, but there is no doubt that they were very largely his own and those of a good many men of his day. The food and the drink had -really attractions then for the diner-out, who cared not a whit what his company might be, provided that the dinner was a good one. The times have changed. No longer can he afford to despise the Persicos apparatus, for those foreign adjuncts have become the chief attraction of the feast. We feast our eyes on the " sentimental gewgaws " that lie on the table before us, and lend our ears to the other " sentimental ,gewgaws " who sit beside us, and it is the dinner—the food and the drink—that may " go hang" for all we care. Witness the article in the Daily News, in the course of which there is no mention of food, and hardly anything said of drink, save in the plea that only one wine should be served at a dinner- party,—and that wine, champagne. What people to whom champagne is forbidden are to drink, the writer does not suggest. On the other hand, he has much to say on the sub- ject of table decoration, and instances an arrangement of wild-flowers that cost a hostess some fifty pounds.

That is the chief extravagance of the modern hostess,—her floral decorations. And her chief preoccupation is the nice assortment of her guests with a view to conversation. That the actual dinner of to-day is immeasurably better than that of half-a-century ago, is due far more to the general improve- ment in English cookery than to a wish to tempt jaded palates by a more refined delicacy of food. Good though the dinner may be, it is not upon her dishes that the hostess depends for her success, for she has long recognised that the exquisite- ness of her table is of no more avail than its rude plenty. Unfortunately, the task that she now sets herself is very difficult of achievement. It was a simple matter to cater for the grosser appetites; it is a much more complicated one to satisfy these undefinable wants. Though she call in the services of artists, cover her table with the rarest orchids, and take the utmost pains to please and interest the eye, by the costly beauty and originality of her decorations ; though she arrange the disposition of her guests with the same anxious care that a General may spend upon the disposition of his army; yet is she not always successful. For the problem she has before her is far more difficult to solve than that which beset the hostess of fifty years back. The latter had to please her guests herself, the former has to discover a means of making her guests please each other. Hence comes about the pursuit of lions who will roar amiably at dinner- parties, and amuse guests who no longer care for being fed. Some hostesses, seeing the difficulties of maintaining general conversations at a large table, have hit upon the notable device of dividing their friends into smaller groups, to be seated at separate tables,—a device which generally fails, for though the groups that are happily constituted may gain by their partial seclusion, the others, united by chance, may be worse off than they were before. In fact, dinner-giving is not a lost art, but an art that has been rendered so difficult by altered conditions as to be rarely practised with success. And the question arises whether this form of hospitality—whose original meaning and intention has disappeared—might not be allowed to disappear also, and give place to some entertain- ment which better meets the requirements of the day.