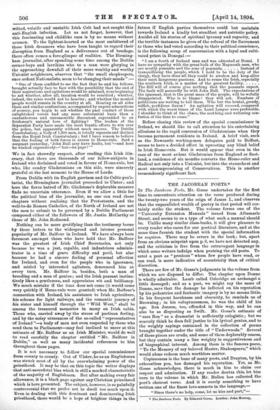 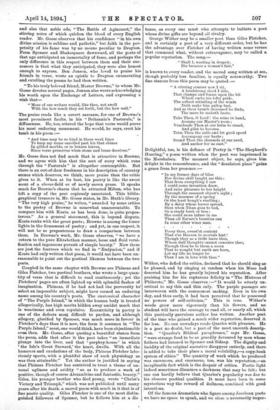 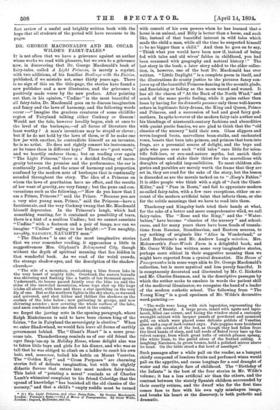 THE JACOBEAN POETS.* IN The Jacobean Poets, Mr. Gosse undertakes

for the first time to concentrate attention on the verse produced during the twenty-two years of the reign of James I., and observes that the unparalleled wealth of poetry in that period will cer- tainly strike the student. The volume forms one of the " University Extension Manuals " issued from Albemarle Street, and seems to us a type of what such a manual should be. Unlike many similar class-books, it will give pleasure to every reader who cares for our poetical literature, and at the same time furnish the student with the special information he requires. There may be errors in the book; but, apart from an obvious misprint upon p. 8, we have not detected any, and the criticism is free from the extravagant language in which some writers indulge when praising the old poets. To extol a poet as " precious " whom few people have read, or can read, is more indicative of eccentricity than of critical discretion.

There are few of Mr. Gosse's judgments in the volume from which we are disposed to differ. The chapter upon Donne is wholly admirable. Lamb called Coleridge an archangel a little damaged; and as a poet, we might say the same of Donne, ,save that the damage he inflicted on his reputation by his pedantries and fantastic imagery is by no means little. In his frequent harshness and obscuiity, he reminds us of Browning ; in his voluptuousness, he was the child of his age. Ben Jonson, too, offended in this way, and he can also be as disgusting as Swift. Mr. Gosse's estimate of " rare Ben " as a dramatist is sufficiently eulogistic ; but we scarcely think he does full justice to his lyrical genius, and to the weighty sayings contained in the collection of poems brought together under the title of " Underwoods." Several of these pieces are crude, and some of them deplorably coarse, but they contain many a line weighty in suggestiveness and of biographical interest. Among them is the famous poem, " To the Memory of my beloved Master, Shakespeare," which would alone redeem much worthless matter.

Copiousness is the bane of many poets, and Drayton, by his exhaustless pen, has damaged his reputation. Yet, as Mr. Gosse acknowledges, there is much in him to claim our respect and admiration. If any reader doubts this, let him turn to the volume in which Mr. Millen has collected the poet's choicest verse. And it is surely something to have written one of the finest love-sonnets in the language,—

" Since there's no help, come, let us kiss and part,"— • The Jacobean Poets. By Edmund Goose. London: John Murray.

and also that noble ode, " The Battle of Agincourt," the stirring notes of which quicken the blood of every English reader. Mr. Gosse observes that his confidence "in his own divine mission is sublime and pathetic," but faith in the per- petuity of his fame was by no means peculiar to Drayton.

From Spenser and Shakespeare downward, all the poets of that age anticipated an immortality of fame, and perhaps the only difference in this respect between them and their suc- cessors is that what they anticipated, they were also honest enough to express. Ben Jonson, who loved to praise his friends in verse, wrote an epistle to Drayton enumerating and extolling the poems he had then written.

" To his truly beloved friend, Master Browne," to whom Mr. Gone devotes several pages, Jonson also wrote acknowledging his worth upon the Exchange of Letters, and expressing a wish that-

" More of our writers would, like thee, not swell

With the how much they set forth, but the how well."

The praise reads like a covert sarcasm, for one of Browne's most prominent faults, in his " Britannia's Pastorals," is diffuseness. He, too, uttered the hope that verse would prove his most enduring monument. He would, he says, erect his tomb in his poem :— "And time may be so kind in these weak lines

To keep my name enrolled past his that shines In gilded marble, or in brazen leaves, Since verse preserves when stone and brass deceives."

Mr. Gosse does not find much that is attractive in Browne, and we agree with him that the sort of story which runs through the " Pastorals " is altogether contemptible. But there is an out-of-door freshness in his description of country scenes which deserves, we think, more praise than the critic gives to it. When at its best, his poetry is like the sweet scent of a clover-field or of newly mown grass. It speaks much for Browne's charm that he attracted Milton, who has left a copy of the poet copiously annotated. This biblio- graphical treasure is, Mr. Gosse states, in Mr. Huth's library. " The very high praise," he writes, " awarded by some critics to the poetry of Browne is somewhat unaccountable. To compare him with Keats, as has been done, is quite prepos- terous." As a general statement, this is beyond dispute.

Keats ranks with the great poets ; Browne is among the lesser lights in the firmament of poetry ; and yet, in one respect, it will not be so preposterous to draw a comparison between them. In Browne's work, Mr. Gosse observes, "we have a' return to the pure Elizabethan manner, loose and fluid versi- fication and ingenuous pursuit of simple beauty." Now these are just the features which we find in " Endymion," and if Keats had only written that poem, it would not have been un- reasonable to point out the poetical likeness between the two poets.

Coupled in the same chapter with Browne are Phineas and Giles Fletcher, two poetical brothers, who wrote a large quan- tity of verse that is difficult to read continuously ; yet the Fletchers' pages are often lighted up with splendid flashes of imagination. Phineas, if he had not had the perversity to' select an impossible subject, might have earned an enduring name among his country's poets. The anatomical character of "The Purple Island," in which the human body is treated allegorically, has high merits hidden away amidst much that is wearisome and even repulsive. Eccentricity in poetry is one of the defects most difficult to pardon, and although allegory, glorified by Spenser, was much more in favour in Fletcher's days than it is now, the form it assumes in " The Parple Island," must, one would think, have been objectionable even then. Mr. Gosse, after quoting a beautiful" stanza from the poem, adds that after it the poet takes " an immediate plunge into the liver, and that porphry-house ' in which the Isle's Great Steward,' the heart, dwells. With all the humours and exudations of the body, Phineas Fletcher labo- riously sports, with a plentiful show of such physiology as was then attainable." Yet the author is justified in saying that Phineas Fletcher has contrived to treat a theme of un- usual ugliness and aridity " so as to produce a work of positive, though of course Alexandrine and fantastic, beauty." Giles, his younger brother who died young, wrote " Christ's Victory and Triumph," which was not published until many years after his death, a sacred poem with much in it that is of fine poetic quality. Giles Fletcher is one of the most distin- guished followers of Spenser, but he follows him at a dis tame, as every one must who attempts to imitate a poet whose divine gifts are beyond all rivalry.

George Wither may be a smaller poet than Giles Fletcher, and is certainly a poet of a very different order, but he has the advantage over Fletcher of having written some verses that command what, without extravagance, may be called a popular reputation. The song,-

" Shall I, wasting in despair, Die because a woman's fair," is known to every reader, and the sacred song written at sea, though probably less familiar, is equally noteworthy. Two fine stanzas from this poem may be quoted :— " A stirring courser now I sit,

A headstrong steed I ride, That champs and foams upon the bit Which curbs his lofty pride. The softest whistling of the winds Doth make him gallop fast, And as their breath increased he finds, The more be maketh haste.

Take Thou, 0 Lord ! the reins in hand, Assume our Master's room ; Vouchsafe Thou at our helm to stand, And pilot to become.

Trim Thou the sails and let good speed Accompany our haste ; Sound Thou the channels at our need, And anchor for us cast."

Delightful, too, is his defence of Poetry in " The Shepherd's, Hunting," a poem written when the poet was imprisoned in the Marshalsea. The meanest object, he says, gives him delight in the remembrance, and the " deeolatest place " gains a grace from her presence :— " In my former days of bliss

Her divine skill taught me this : That from everything I saw I could some invention draw, And raise pleasure to her height Through the meanest object's sight ; By the murmur of a spring Or the least bough's rustling; By a daisy whose leaves spread, Shut when Titan goes to bed, Or a shady bush or tree ; She could more infuse in me Than all Nature's beauties can In some other wiser man.

Poesy thou, sweet'st content That e'er Heaven to mortals lent !

Though they as a trifle leave thee, Whose dull thoughts cannot conceive thee, Though thou be to them a scorn That to nought but earth are born,

Let my life no longer be Than I am in love with thee."

Wither, who defied the critics, declared that he should sing ars, be pleased, and by singing at random when his Muse had deserted him he has greatly injured his reputation. After praising him for his rapturous felicity in " The Mistress of Philarete," Mr. Gosse observes :—" It would be utterly un-

critical to say this and this only. The purple passages are• interwoven with the commonest sacking. Even in his own- day, and thus early, it had been perceived that he possessed no powers of self-criticism." This is true. Wither's. weeds grow more vigorously than his flowers, and no- student will have the courage to read all, or nearly all, which. this poetically garrulous author has written. Another poet of the time who gained a much wider reputation, deserved it far less. No one nowadays reads Quarles with pleasure. He- is a poet no doubt, but a poet of the most uncouth descrip- tion. " Quarles's Biblical paraphrases," says Mr. Gosse, " were strange food to be so greedily devoured by men whose- fathers had listened to Spenser and Sidney. The dignity and lucidity of the original narrative disappear entirely, and there- is added to take their place a moral volubility,—a copy-book system of ethics." The quantity of work which he produced was enormous, and enormous, too, was his reputation,—an inexplicable fact which is the despair of critics. Poetic light indeed sometimes illumines a darkness that may be felt; but one can hardly believe that Quarles's popularity was due to- his obscure poetical qualities. It must have been in some mysterious way the reward of dullness, combined with good intentions.

Of the famous dramatists who figure among Jacobean poets we have no space to speak, and we close a necessarily impel.- feet review of a useful and brightly written book with the hope that all students of the period will have recourse to its pages.