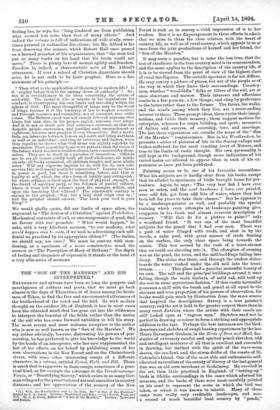 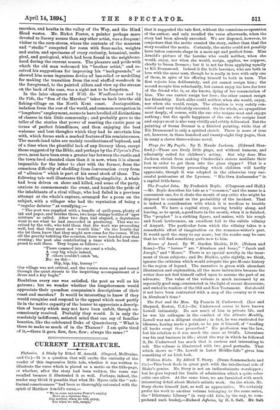 THE " SON OF THE MARSHES" AND HIS INTERPRETER.*

SHEPHERDS and sylvans have been so long the puppets and mouthpieces of authors and poets, that we must go back almost to the days of Theocritus, or of Amos among the herds- men of Tekoa, to find the free and uncovenanted utterances of the brotherhood of the crook and the fold. So with modern thought on the outdoor life of England, it has in most cases been the educated mind that has gone out into the wilderness to interpret the beauties of the fields, rather than the native of the soil who has come forward unbidden to tell his story. The most recent and most welcome exception is the author who is now so well known as the " Son of the Marshes." We say author advisedly, because, distrusting his powers of pen- manship, he has preferred to give his knowledge to the world by the hands of an interpreter, who has now supplemented the last of her efforts on his behalf by publishing some of her own observations in the New Forest and on the Christchurch rivers, with some other interesting essays of a different character, in a volume entitled Forest, Field, and Fell. There is much that is suggestive in these essays, sometimes of a prac- tical kind, as for example the reference to the VerschOnerungs- Verein, or "Beautifying Society," which exists in so many Ger- man villages for the preservation of natural amenities in country districts ; and her appreciation of the scenery of the New • (1.) With the Woodlanders and by the Tide. By " A Son of the Marshes." Edited by J. A. Owen. London: Blackwood and Sons.—(2.) Perak Field, and FeU. By J. A. Owen, Editor of "A Son of the Marshes." London: Lawrence and Bulks.

Forest is such as to convey a vivid impression of it to her readers. But it is no disparagement to these efforts to admit that we miss in them the close relation with the heart of country life, as well as of rural scenery, which appeals to us at once from the joint productions of herself and her friend, the " Son of the Marshes."

It may seem a paradox, but is none the less true, that the test of excellence in the true country mind is its concentration, and the same applies to the description of the country life, if it is to be viewed from the point of view of the highest class of rural intelligence. The outside spectator is far too diffuse. He may convey a picture of places, but not of the people or of the way in which they know their surroundings. Country- men, whether " wood-bidin " folks or tillers of the soil, are at once observant and narrow. Their interests and affections centre in a few persons ; a few things ; and cling by preference to the latter rather than to the former. The farms, the walks, and the woods among which they live, are a never-ending interest to them. These prompt ideas, these excite their imagi- nations, and tickle their memory; these suggest motives for enterprise, schemes for crops, building, and sport; memories of failure and success, of courtship, love, and marriage. The last three experiences are outside the scope of the " Son of the Marshes' " reminiscences. But in his Woodlanders, he presents a series of pictures of life in the Surrey valleys and brakes sufficient for the most exacting lover of Nature, and true to the limits of rustic thought. His own personality is still kept in the background, though more indications of his varied tastes are allowed to appear than in such of his ex- periences as have yet been published.

Painting seems to be one of his favourite recreations. What his subjects are is hardly clear from his books, except that be alludes to specimens of birds brought home for por- traiture. Again, he says : "The very best fish I have ever seen or eaten, and the most handsome I have ever painted, were odd fish, got from odd bits of water, where they had been left for years to take their chance." But he appears to be a landscape-painter as well, and probably the special training which even attempts at landscape-painting give, reappears in his fresh and almost reverent description of scenery. " Will that do for a picture to paint ?" asks a woodland friend. " It was one of the most beautiful subjects for the pencil that I had ever seen. There was a pool of water fringed with reeds, and shut in by the woods, a calm pool, with great masses of reeds floating oh the surface, the only clear space being towards the centre. This was caused by the rush of a trout-stream that we could see shooting into it. The afterglow of evening was on the pond, the trees, and the mill-buildings falling into decay. The sluice was there, and through the broken sluice- boards the water rushed under the old mill into the trout- stream This place had a peculiar mournful beauty of its own. The mill and the principal buildings around it were falling, though the main timbers, of solid oak, still held up the rest in some mysterious fashion." If this rustic naturalist possesses a skill with the brush and pencil at all equal to the niceness and true proportion of his powers of observation, his books would gain much by 'illustration from the same source that inspired the descriptions. Surrey is a true painter's country, and the art is held in far greater respect there than in many rural districts where the artists with their easels are still looked upon as " vagrom men." Sketches need not be perfect in drawing or colour to form a striking and appropriate addition to the text. Perhaps the best instances are the bird- drawings and sketches of rough boating experiences by the late Henry Davenport Graham, in the Birds of Iona and Mull, fac- similes of extremely careful and spirited pencil-sketches, odd and intelligent mixtures of all that is excellent and execrable in drawing, but instinct with the spirit of the wave-worn shores, the sea-fowl, and the storm-drifts of the coasts of St. Columba's Island. One of the most able and enthusiastic self- educated naturalists of the county of Surrey of the last general tion was an old corn merchant at Godalming. HI excelled in the art, then little practised in England, of " setting-up " birds in lifelike surroundings in the cases which adorned his museum, and the backs of these were most carefully painted on his easel to represent the scene in which the bird was taken, or which it was known to inhabit. Many of these cases were really very creditable landscapes, and were a record of much beautiful local scenery by " ponds,"

marshes, and heaths in the valley of the Wey, and the Hind Head wastes. Mr. Birket Foster, a painter perhaps more -devoted to Surrey scenes than any other artist, was a frequent visitor to the corn-stores, where the contents of the museum and " studio " competed for room with flour-sacks, weights and scales, and specimens of every curiosity, botanical, zoolo- gical, and geological, which had been found in the neighbour- hood during the current season. The pleasure and pride with which the old man welcomed his "brother artist," and re- ceived his suggestions for improving his " backgrounds," or showed him some ingenious device of bas-relief or modelling for making the transition from the real stuffed woodcock in the foreground, to the painted alders and view up the stream on the back of the case, was a sight not to be forgotten.

In the later -chapters of With the Woodlanders and by the Tide, the "Son of the Marshes" takes us back into the old

fishing-village on the North Kent coast. Juxtaposition, isolation from the rest of the world, and common occupation in

"longshore" employment, seems to have levelled all distinctions of classes in this little community ; and probably gave to the

teller of the stories that power of meeting the rustic poor on terms of perfect friendliness, and then enjoying the best welcome and best thoughts which they had to entertain him with, which forme such a marked feature of his reminiscences. The marsh-land tales are mainly recollections of boyhood, and

of a time when the plentiful lack of any literary ideas, except those suggested by the Bible, and perhaps by the Pilgrim's Pro- gress, must have been even a greater bar between the rustic and the town-bred educated class than it is now, when it is almost impossible for the latter to chat with the former, from the conscious difficulty of shedding from Conversation every form of " allusion " which is part of his usual stock of ideas. The following tale well illustrates this baffling simplicity. A whale had been driven on shore and killed, and some of the party, anxious to commemorate the event, and humble the pride of the inhabitants of a rival village, who had failed in a previous attempt at the whale's capture, arranged for a poem on the

subject, with a villager who had the reputation of being a "regular dabster " at versifying :—

" The poet was supplied with a bundle of quill-pens, plenty of ink and paper, and besides these, two large dumpy bottles of ager mixture' so called. After two days had elapsed, a deputation went to see what he had succeeded in producing. This was re- ceived by the wife, who told them that the work was proceeding well, but that they must not worrit him.' On the fourth day she let them know that they might now come for the verses. With all the gravity befitting the occasion, these were handed over that evening; the poet also contributing a tune which he had com- posed to suit them. They began as follows

There cummed into our coast a whale,

A very big whale indeed, T others couldn't catch 'un, Bu: we did—

Our village was not critical, and the verses were sung and roared through the quiet streets to the inspiriting accompaniment of a drum and a key bugle."

Doubtless every one was satisfied, the poet as well as his patrons ; but we wonder whether the longshoremen would appreciate their quondam companion's descriptions of their coast and marshes ? It would be interesting to know if they would recognise and respond to the appeal which must partly lie in the native capacity of the hearer to appreciate a descrip- tion of beauty which may not have been unfelt, though un- consciously received. Probably they would. It is only the

resolutely indifferent, satiated mind that can say of familiar beauties, like the celebrated Duke of Queensberry, " What is there to make so much of in the Thames ? I am quite tired of it,—there it goes, flow, flow, flow ; always the same 1"