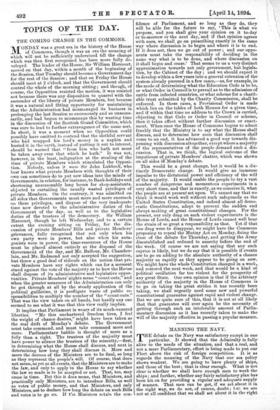 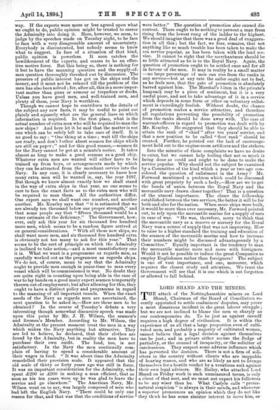 MANNING THE NAVY. T HE debate on the Navy was satisfactory

Into the minutiae of these complaints we have no desire to enter, but we cannot help feeling that not so much is being done as could and ought to be done to make the service popular. Why should not the subject be examined by a Committee of the kind which a year or two ago con- sidered the question of enlistment in the Army ? Mr. Forwood mentioned a problem which could be discussed with great propriety by such a body,—How are we to get the bonds of union between the Royal Navy and the mercantile navy drawn closer together? That is a question of the utmost importance. The closer the fellowship established between the two services, the better it will be for both and also for the nation. When more ships were built. it would be more than ever necessary, Mr. Forwood pointed out, to rely upon the mercantile marine for a supply of men in case of war. " He was, therefore, sorry to think that the mercantile navy as a, reserve or nursery for the Royal Navy was a source of supply that was not improving. How to raise to a higher standard the training and education of the seamen of the mercantile marine and how to increase their numbers might be discussed advantageously by a. Committee." Equally important is the tendency to man the mercantile marine more and more with foreigners. Would it not be possible to induce the great Companies to employ Englishmen rather than foreigners? The subject is one of vast importance, and one, moreover, which requires the closest study and attention. We trust the Government will see that it is one which is not forgotten or allowed to fall behind.