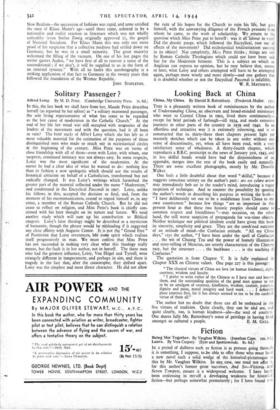 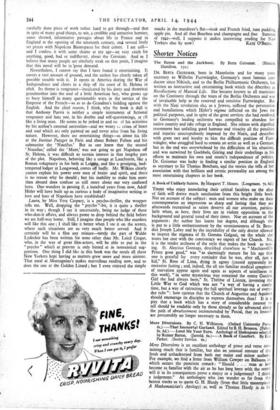 Being Met Together. By Vaughan Wilkins. (Jonathan Cape. Jos. 6 1.) Laura. By Vera Caspary. (Eyre and Spottiswoode. 8s. 6d.) IN a period of dullness such as fiction is at present going throu.rh it is something, I suppose, to be able to offer those who must ha :t a new novel such a solid wedge of the historical-picturesque c; this by Mr. Vaughan Wilkins. In any case, one need not offer t. for this author's former great Successes, And So—Victoria. and Seven Tempest, ensure it a widespread welcome. I have latdv been confessing in myself a developing weakness for histori,.11 fiction—but perhaps somewhat prematurely ; for I have found

carefully done piece of work rather hard to get through—and that in spite of many good things, to wit, a credible and attractive heroine, some shrewd, informative passages about life in France and in England at the opening of the nineteeth century, and several lively set pieces with Napoleon Buonoparte for their centre. I am still— and I confess it with some shame at my age—an easy catch for anything, good, bad or indifferent, about the Corsican. And as I believe that many people are similarly weak on that point, I imagine that this novel will be in 'great demand.

Nevertheless, I cannot say that I have found it entertaining. It covers a vast amount of ground, and the author has clearly taken all possible trouble with it. It opens in America during the War of Independence and closes in a ship off the coast of St. Helena in 1818. Its theme is vengeance—inculcated by his dotty and theatrical grandmother into the soul of a little American boy, who grows up to busy himself in many questionable ways in the service of the Emperor of the French—so as to do Grandma's bidding against the English. And the chief reason, I think, why the book is dull is that Anthony Purvis is neither a simple instrument of fictional vengeance and hate nor, in his doubts and self-questionings, at 011 like a living man. He seems to be jerked in and ou of his activities by his author's external necessities—and we weary c. crises of heart and soul which are only painted on and never arise from his living nature. However, there are entertaining things—as about his life at the Institut Putzger in Paris and about Robert Fulton and his submarine the 'Nautilus.' But as one knew that the second Nautilus,' called the Mute,' was not going to get Napoleon off St. Helena, it was difficult to sustain interest in that lengthy part of the plot. Napoleon, behaving like a savage at Lauchstein, like a Roman voluptuary in his bath at Leipzig, and like a gossiping, bad- tempered lodger at Longwood, comes off badly. Mr. Wilkins clearly cannot explain his power over men of brains and spirit, and there is no reason why he should ; but his inability to make him more than absurd does confuse us still more about our very confused hero. One wonders in passing if, a hundred years from now, Adolf Hitler will have built up as curious a body of imaginative writing as love and hate of Napoleon have established?

Laura, by Miss Vera Caspary, is a psycho-thriller, the wrapper tells me. Well, dropping the "psycho "-bit, it is quite a thriller in its way ; though I say it uncertainly, being no judge of these who-dun-it affairs, and always prone to drop behind the field before we are half-way home. Still, I imagine that people who like murders will like this one ; I shall like it better when I see it on the screen, where such situations are so very much better served. And it certainly will be a film any minute—surely the part of Waldo Lydecker has been written for none other than Mr. Laird Cregar, who, in the way of great film-actors, will be able to put in the "psycho" which at present is only hinted at in nonsensical sug- gestions. One thing I did like in this book was the meals all these New Yorkers kept having as matters grew more and more sinister. That meal at Montagnino's makes marvellous reading now, and so does the one at the Golden Lizard ; but I even enjoyed the simple

snacks in the murderee's flat—steak and French fried, rum pudding apple pie. And all that Bourbon and champagne and fine. Summer of 1942—well, I suppose it makes interesting reading for New