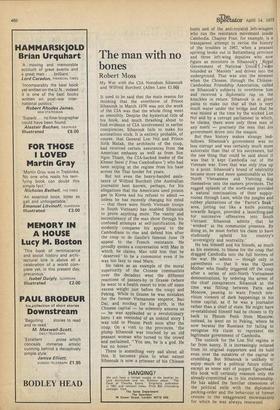 The man with no bones

My War with the CIA Norodom Sihanouk and Wilfred Burchett (Allen Lane £1.60) It used to be said that the main reason for thinking that the overthrow of Prince Sihanouk in March 1970 was not the work of the CIA was that the whole thing went so smoothly. Despite the hysterical title of his book, and much thrashing about to

find evidence of CIA involvement in earlier conspiracies, Sihanouk fails to make his accusations stick. It is entirely probable, of course, that General Lon Nol and Prince Sink Matak, the architects of the coup, had received certain assurances from the American embassy as well as from Son Ngoc Thanh, the CIA-backed leader of the Khmer Serei (' Free Cambodians ') who had been sniping at the regime from his base across the Thai border for years.

But not even the heavy-handed assistance of Wilfred Burchett (the Australian journalist best known, perhaps, for his allegations that the Americans used poison gas in Korea and his refusal to admit — unless he has recently changed his mind — that there were North Vietnam troops in South Vietnam) has enabled Sihanouk to prove anything more. The vanity and inconsistency of the man show through his confused attempts at self-justification. He modestly compares his appeal to the Cambodians to rise and defend him after the coup to de Gaulle's famous June 18 appeal to the French resistance. He proudly quotes a conversation with Mao in which, he claims, Mao told him that he ' deserved ' to be a communist even if he was too lazy to read Marx.

He takes as an example of the moral superiority of the Chinese communists over the decadent west the different reactions of passers-by in Grasse (where he went to a health resort to trim off some excess weight just before the coup) and Peking. While in Grasse he was mistaken for the former Vietnamese emperor, Bao Dai, and mocked for his girth, in the Chinese capital — he solemnly assures us — he was applauded as a revolutionary hero. I am reminded of an unkind story I was told in Phnom Penh soon after the coup. On a visit to the provinces, the plump Sihanouk was touched by an old peasant woman who turned to the crowd and exclaimed, "You see, he is a god. He has no bones."

There is something very sad about all this. It becomes plain to what extent Sihanouk is now a prisoner of his Chinese hosts and of the anti-royalist left-wingers who run the resistance movement inside Cambodia. Chapter Four, for example, is a transparent attempt to revise the history of the troubles in 1967, when a peasant uprising broke out in Battambang province and three left-wing deputies who now figure as ministers in Sihanouk's ',119yal Government of National Uniolti ;'were hounded as ' Maoists ' and driven into the underground. That was also the moment when the Chinese, through the ChineseCambodian Friendship Association, called on Sihanouk's subjects to overthrow him and received a diplomatic rap on the knuckles in return. Sihanouk is at great pains to make out that all that is very much water under the bridge and that he was misled at the time by the wicked Lon Nol and by a corrupt parliament in which, he claims, there were only three men of any merit — precisely the men that his government drove into the maquis.

But then history makes strange bedfellows. Sihanouk's government was no less corrupt and was certainly much more autocratic than that of his successors, but the one thing that could be said about it was that it kept Cambodia out of the Vietnam war. Even that was only true up to a point. Sihanouk's brand of neutrality became more and more questionable as the North Vietnamese and Vietcong dug themselves into the eastern provinces. The rugged uplands of the north-east provided a natural continuation of their supplyroutes through Laos, while the jungles and rubber plantations of the ' Parrot's Beak' area, jutting out like a knife pointing towards Saigon, provided a launching-pad for successive offensives into South Vietnam. Sihanouk admits that he ' winked ' at the communist presence. By doing so, he must forfeithis claim to have upheld his 'sovereignty and neutrality.' country's He has himself and his friends, as much as his enemies, to blame for the coup that dragged Cambodia into the full horrors of the war. He admits — though only in parenthesis — that it was the Queen Mother who finally triggered off the coup after a series of anti-North Vietnamese demonstrations, by ordering the arrest of the chief conspirators. Sihanouk at the time was flitting between Paris and Moscow, pausing to warn French television viewers of dark happenings in his home capital, as if he was a journalist rather than a chief of state. He might have re-established himself had he chosen to fly back to Phnom Penh from Moscow; instead, he went on to Peking, where he now berates the Russians for failing to recognise his claim to represent the legitimate government of Cambodia.

The outlook for the Lon Nol regime is far from sunny. It is increasingly isolated from its original supporters and its hold even over the outskirts of the capital is crumbling. But Sihanouk is unlikely to enjoy much of a political future either, except as some sort of puppet figurehead. His book will certainly reassure only the already-committed as to his statemanship.

He has added the familiar obsessions of the political exile with the diplomatic pecking-order and the behaviour of former cronies to the exaggerated showmanship for which he was always renowned.