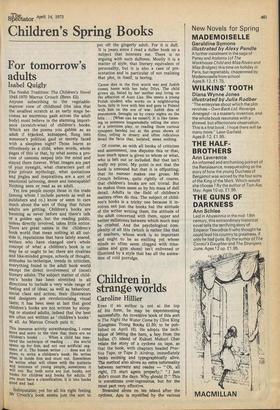 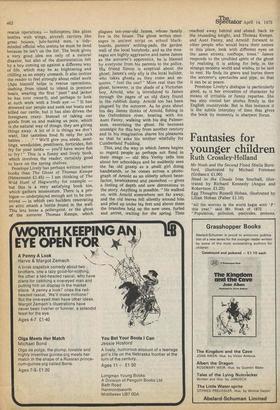 Even if an author is not at the top of his form, he may be experimenting successfully. An inventive book of this sort is The Night the Water Came by Clive King (Longman Young Books £1.50; to be published on April 16). He adopts the technique of letting the hero, a boy from the Indian (?) island of Kukuri Mukuri Char relate the story of a cyclone on tape, so that the book, with chapters headed Practice Tape, or Tape 3: Airdrop, immediately looks exciting and typographically alive. The method also alows an extra informality between narrator and reader — "Oh, all right, I'll start again properly," "I just didn't count the days. Why should 1?" This is sometimes over-ingenuous, but for the most part very effective.

Stranded alone on his island after the cyclone, Apu is mystified by the various rescue operations — helicopters like glass bottles with wings, aircraft carriers like great houses, jute-haired men, a tidyminded official who insists he must be dead because he isn't on the list. The book gives a very good idea not only of a natural disaster, but also of the disorientation felt by a boy coming up against a different way of life, which may be as frightening and chilling as an empty stomach. It also invites the reader to feel strongly about relief work (Apu himself helps in rescue operations, dashing from island to island in pontoon boats, wearing the first ' pant' and jacket he has ever owned), and perhaps to look at such work with a fresh eye — " It has drowned our people and sunk our boats and killed our cattle, hut it has also driven the foreigners crazy. Instead of taking our goods from us and making us poor, which is the natural way of things, they are giving things away. A lot of it is things we don't want, like tasteless food fit only for sick babies . . . ." " We'll give you seeds, seedlings, weedicides, pestilisers, ferticides, fish fry for your tanks — you'll have more fish to fry ! " This is a funny and lively book, which involves, the reader; certainly good to have on the spring shelves.

Penelope Lively has perhaps written better books than The Ghost of Thomas Kempe (Heinemann £1.45) — I am thinking of The Wild Hunt of Hagworthy for example — but this is a very satisfying book too, which gathers momentum. There is a prologue — underplayed enough not to be contrived — in which two builders renovating an attic smash a bottle found in the wall. This lets loose a poltergeist, or the ghost of the sorcerer Thomas Kempe, which

plagues ten-year-old James, whose family live in the house. The ghost writes messages in ancient script on school blackboards, parents' writing-pads, the garden wall of the local busybody, and as the messages are highly aggressive and name James as the sorcerer's apprentice, he is blamed by everyone from his parents to the police. His friend Simon is sceptical about the ghost; James's only ally is the local builder, who takes ghosts as they come and enquires, "Just the one? " More real than the ghost, however, is the shade of a Victorian boy, Arnold, who is introduced to James through the pages of an old diary found in the rubbish dump. Arnold too has been plagued by the sorcerer. As he goes about his day James thinks of Arnold, fishing in the Oxfordshire river, boating with his Aunt Fanny, walking with his dog Palmerston, exorcising the ghost. He becomes nostalgic for this boy from another century and in his imagination shares his pleasures so that he asks his mother wistfully for Cumberland Pudding.

This, and the way in which James begins to regard people as perhaps not fixed in their image — old Mrs Verity tells him about her schooldays and he suddenly sees the fat old gossip as a small girl doing handstands, or he comes across a photograph of Arnold as an elderly school benefactor, bewhiskered and paunched — gives a feeling of depth and new dimensions to the story. Anything is possible. "He walked on, with Arnold somewhere not far away, and the old leaves fell silently around him and piled up under his feet and above them the branches held up the new ones, furled and secret, waiting for the spring. Time reached away behind and ahead: back to. the crusading knight, and Thomas Kempe, and Aunt Fanny, and Arnold: forward to other people who would leave their names in this place, look with different eyes on the same streets, rooftops, trees." James responds to the troubled spirit of the ghost by realising it is asking for help in the strange modern world and wishes to be laid to rest. He finds its grave and buries there the sorcerer's spectacles and pipe, so that it can be at peace.

Penelope Lively's dialogue is particularly good, as is her evocation of character by means of irritable or funny repartee. She has also rooted her stories firmly in the English countryside. But in this instance it is the subtle interplay of time that gives the book its moments in sharpest focus.