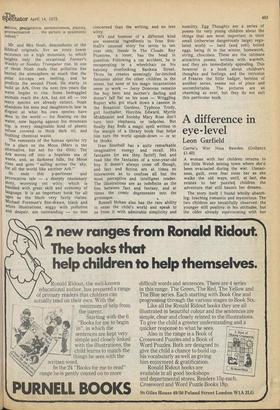 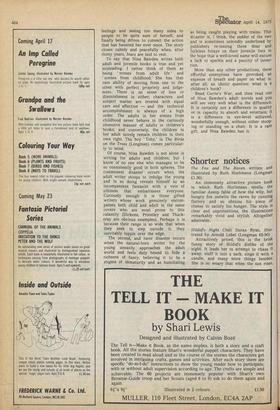 A difference in eye-level

Carrie's War Nina Bawden (Gollancz £1.40) A woman with her children returns to the little Welsh mining town where she'd been evacuated during the war. Uneasiness, guilt, even fear sieze her as she walks the old ways, until, at last, she relates to her puzzled children the adventure that still haunts her dreams.

The story itself I found wholly absorbing: touching romantic and mysterious. The two children are beuatifully observed: the younger still positive in his attitudes, but the older already equivocating with her feelings and seeing too many sides to people to be quite sure of herself, and finally being driven to commit the action that has haunted her ever since. The story closes calmly and peacefully when, after thirty years, fears are laid to rest.

To say that Nina Bawden writes both adult and juvenile books is true and yet misleading. I rather think of them as being ' scenes from adult life ' and 'scenes from childhood.' She has that rare ability of moving from one to the other with perfect propriety and judgement. There is no sense of loss or diminishment in either; characters and subject matter are treated with equal care and affection — and the technical accomplishment is always of a high order. The adults in her scenes from childhood never behave in the curiously obsessive manner of adults in children's books; and conversely, the children in her adult novel l remain children in their own right. The boy 'Toby,' in The Birds on the Trees (Longman) comes particularly to mind.

Of course, Nina Bawden is not alone in writing for adults and children; but I know of no one else who manages to be so consistently good in' both spheres. The commonest disaster occurs when the adult writer stoops to indulge the young and in so doing reveals himself as an incompentent fantasist with a vein of silliness that embarrasses everyone. Curiously enough it is those gifted writers whose work genuinely encompasses both child and adult in the same covers who are most prone to this calamity (Dickens, Priestley and Thackeray are obvious examples). Perhaps it is because their range is so wide that when they seek to step outside it, they inevitably topple over the edge.

The second, and rarer disaster occurs when the natural-born writer for the young uneasily approaches the adult world and feels duty bound to hide a richness of fancy, believing it to be a stigma of immaturity and as humiliating as being caught playing with trains. This disaster is, I think, the sadder of the two and is sometimes unkindly underlined bY publishers re-issuing these dour and luckless forays on their juvenile lists in the hope that a well-loved name will excuse a lack ot sparkle and a paucity of invention.

More than any other productions, these effortful enterprises have provoked, an expense of breath and paper on what is, after all, an idiotic question: what is a children's book?

Read, Carrie's War, and then read one of Nina Bawden's adult novels and you will see very well what is the difference. It is certainly not a difference in quality or in capacity to absorb and entertain; it 'is a difference in eye-level achieved, wonderfully enough, without either stoop. ing or standing on a chair. It is a rare gift, and Nina Bawden has it.