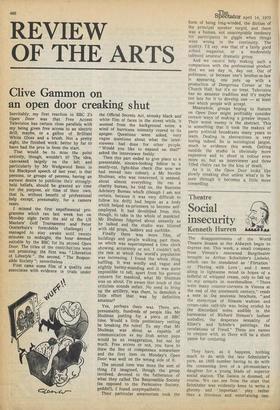 Inevitably, my first reaction to BBC 2's Open Door was that Free Access Television has certain close parallels with my being given free access to an electric drill, maybe, or a gallon of Brilliant White Gloss and a brush. Not a pretty sight, the finished work: better by far to 'have had the pros in from the start.

That would be to miss the point entirely, though, wouldn't it? The idea, canvassed largely on the left and particularly by Mr Wedgwood Benn in his Blackpool speech of last year, is that persons, or groups of persons, having an earnest desire to publicise their stronglyheld beliefs, should be granted air time for the purpose, air time of their own, that is, without benefit of professional help except, presumably, for a camera team.

I missed the first expetimental programme which ran last week but on Monday night (with the aid of ,ehe US Masters' Golf Tournament and Peter Oosterhuis's formidable challenge) I managed to stay awake until twenty minutes to midnight, the hour deemed suitable by the BBC for its second Open Door. The titles of the contribut:ons were not promising: the first was "Liberation of Lifestyle ", the second, " The Responsible Society "; nevertheless . . .

First came some film of a quality one associates with evidence in trials under the Official Secrets Act, streaky black and white film of faces in the street while, it seemed from the background noise, a wind of hurricane intensity roared to its apogee. Questions were asked, very vague questions about what the interviewees had done for other people. "Would you like to expand on that?" asked the interviewer feebly.

Then this part ended to give place to a presentable, sincere-looking fellow in a neatly-cut, light-blue check (for now we had moved into colour), a Mr Neville Shulman, who was concerned, it seemed, about almost everything. He ran a charity bureau, he told us, the Business Advisory Bureau whic'h (though I am not certain, because it was very difficult to follow his drift) had begun as a body which helped ex-prisoners to become selfemployed. It had developed from this, though, to take in the whole of mankind. Mr Shulman fidgeted about uneasily as he talked and the studio was littered with old props, ladders and suchlike.

Finally there was more film, of buildings and people walking past them, on which was superimposed a time clock showing, accurately or not, I couldn't tell, the rate at which the world's population was increasing. I found the whole thing baffling. It was woolly and vague and slightly barmy-sounding and it was quite impossible to tell, apart from his general concern for mankind, what Mr Shulman was on about. I'm aware that much of this criticism sounds unfair. No need to bring up the artillery, was there, to demolish a little effort that was by definition amateur?

Yes, perhaps there was. There are, presumably, hundreds of people like Mr Shulman jostling for a piece of BBC time. Would a little preliminary vetting be breaking the rules? To say that Mr Shulman was about as capable of communication as my Irish setter pups would be an exaggeration, but not by much. Free access or not, you have to draw the line of competence somewhere and the first item on Monday's Open Door was well on the wrong side of it.

The second item was more the sort of thing I'd imagined, though the group involved, devoted to the futherance of what they called The Responsible Society (as opposed to the Permissive Society, geddit?), I found unsympathetic.

Their particular amateurism took the form of being long-winded, the diction of the principal speaker turgid, and there was a human, not unacceptable tendency for participants to giggle when things went wrong in the continuity. The quality, I'd say, was that of a fairly good school magazine, or a moderately talented amateur dramatic group.

And we cannot help making such a comparison with the professional product that we see day in, day out. Out of politeness, or because one's brother-in-law is appearing, one puts up with a production of Dangerous Corner at the Church Hall, but it's no treat. Television has no amateur tradition and it's maybe too late for it to develop one — at least one which people will accept.

Meanwhile, groups hoping to feature on Open Door might profitably consider certain ways of making a greater impact. Their worst enemy is the abstract. This is something that it took the makers of party political broadcasts many years to learn. Dealing in abstractions is very boring indeed. So is sociological jargon, much in evidence this week. Getting outside the studio is obviously more expensive and to shoot in colour even more so, but an interviewer and three filled chairs can be the kiss of death.

As it is, the Open Door looks like slowly creaking shut unless what's to be seen through it becomes a little more compelling.