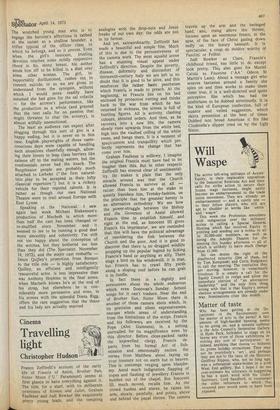 The active left-wing militants of Actors' Equity, in their implacable opposition to the Industrial Relations Act and their calls for strike action to secure their frozen wage increases, might easily become an embarrassment to the trade union movement. They are already an embarrassment — and a costly one — to their fellow players, who still are apt to shudder at words like 'union ' and ' wages '.

its 26,000-odd members, as well as hiring the Adelphi Theatre for the meeting this Sunday afternoon — all of which is unlikely to leave much change

No one denies the right of the disaffected minority (244 of them, led by Tom Kempinski and Corin Redgrave) to call the meeting. The resolution they are moving, however, is vexaciously frivolous. It is simply a call for the Equity Council to resign and allow the immediate election of "an alternative leadership " and the only little thing wrong with that is that Equity's annual election arrangements are already under way. Nominations Close this month.

Whc has been getting at the Department of the Environment over the matter of arts in the parks? A fair amount of high-handed banning seems to be .going on, and a notable sufferer is the Arts Council's Serpentine Gallery in Hyde Park, forbidden to stage on its lawns any wore of those exhibitions in. volving any sort of participation ' or, indeed, anything that moves — hitherto its prime holiday attractions. They may not be everybody's ' art ', and perhaps they are not to the taste of the Minister, Geoffrey Rippon, who, not so long ago, was a substantial stake-holder in a posh West End gallery. But I hope I do not over-estimate his tolerance in suggesting he has a quiet word with his UnderSecretary, Lord Sandford, to counteract the other influences to which that reverend peer would seem to have been exposed.