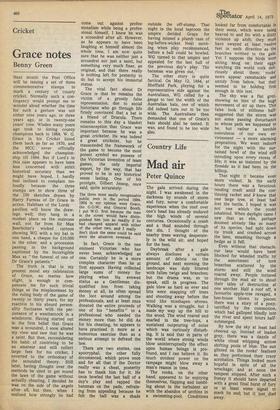 The gale arrivedduring the night. I was awakened in the darkness by sounds of storm and fury, never a comfortable experience when the roof over one's head has already endured the high winds of several centuries. Occasionally a crash and a thud sounded through the din. I thought of the nearby trees waving desperately in the wild air, and hoped for the best.

Daybreak after a gale always discloses a certain amount of debris on the ground, and next morning the landscape was duly littered with fallen twigs and branches; but the drama was, so to speak, still in progress. The gale blew as hard as ever and bits were snapping off trees and shooting away before the wind like misshapen afrows. Walking was a struggle, but I made my way up the hill to the wood. The wind roared and snarled in the tree-tops, a sustained outpouring of noise which was curiously disturbing. It is said that in parts of the world where strong winds blow uninterruptedly the effect upon human beings is profound, and I can believe it. So much strident power on the rampage might blow away a man's reason in time.

The rooks, on the other hand, appeared to be enjoying themselves, flapping and tumbling about in the turbulent air with the abandon of urchins in a swimming-pool. Conditions

looked far from comfortable in their nests, which were being heaved to and fro with a dizzY violence up aloft; they must have swayed at least twelve feet in each direction as the branches writhed in the gale. Yet I suppose the birds were sitting snug on their egg!, watching the world rock deliriously about them; rooks' nests appear ramshackle and untidy from below, but theY seemed to be holding firm enough in this test.

The sky was a flat grey, showing no hint of the huge movement of air up there. This false look of stillness half suggested that the storm waS not some passing disturbance in whose path we happened to:, be, but rather a terrible convulsion of our own environment — a more alarming proposition. We went indoors for the night with the sustained howl of the wind still intruding upon every recess of life; it was as insistent by the fireside as it had been on the hilltop.

That night it became even more violent. In the early hours there was a ferocious' rending crash amid the continuing racket and V knew that one large tree, at least had lost the battle. I hoped it was not one which the rooks inhabited. When daylight came / saw that an elm, perhaps doomed already like so many of its species, had split down its trunk and crashed across the lane, smashing through a hedge as it fell.

Even without that obstacle, our lane would have been blocked for wheeled traffic by the assortment of torn branches scattered by the storm: and still the wind roared away. People tottered through the mad air to shout their tales of destruction at one another. Half a roof off, a favourite apple-tree ravaged, a hen-house blown to pieces; there was a story of a pony, terrified by the commotion, which had galloped blindly into the river and spent hours halfsubmerged.

By now the sky at least had cheered up. Instead of leaden grey, there was a dazzle of white cloud whipping across shifting pools of blue. The sun glinted on the rooks' feathers as they performed their crazy acrobatics. Things looked more hopeful in spite of all the wreckage; and at noon the tempest stopped. After such a frenzy it should have departed with a great final burst of fury or at least some signal to mark its end; but it just died away.