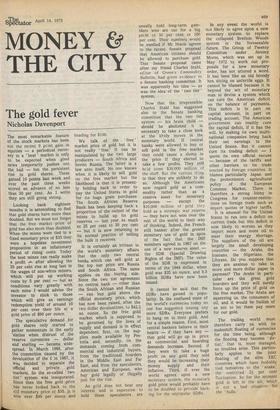 The most remarkable feature of the stock markets has been not the recent 9 pcint gain in equities — a periodical recovery in a ' bear ' market is only to be expected when good news temporarily pushes out the bad — but the persistent rise in gold shares. These gained 10 points last week and over the past three weeks scored an advance of no less than 20 per cent. As I write they are still going strong.

Looking back eighteen months it is astonishing to find that gold shares have more than doubled. But we must not forget that the free market price of gold has also more than doubled. When the mines were tied to a fixed monetary price of $35 they were a hopeless investment proposition in an inflationary period of rising costs. Today the best mines can really make a profit -1-, after allowing the 25 per ceht rise at long last in the wages of non-white miners, Which will put up working costs by 5 per cent — but as conditions vary greatly with each mine I would advise the investor to stick to those which will give an earnings redemption yield of around 10 per cent over their life at a gold price of $90 per ounce.

The speculative demand for gold shares only started to gather momentum in the early 'sixties when distrust of the reserve currencies — dollar and sterling — became widespread. In March 1968, after the commotion caused by the devaluation of the in 1967, it was decided to separate the official and private gold markets. So the so-called 'two tier' system was inaugurated. Since then the free gold price has never looked back to the old monetary price of $35. It is now over $90 per ounce and heading for $100.

We talk of the 'free ' market price of gold but it is not really ' free.' It can be manipulated by the two large producers — South Africa and Soviet Russia. The latter is a law unto itself. No one knows when it is likely to sell gold on the free market but the likelihood is that it is presently holding back in order to pay the United States in gold for its huge grain purchases. The South African Reserve Bank has been keeping back a proportion of the output of the mines to build up its gold reserves — last year as much as 25 per cent to 30 per cent — but it is now returning to its normal practice of selling the bulk it receives.

It is certainly an irritant in the world's monetary affairs that the only two central banks which can sell gold at the top tier price are Russia and South Africa. The same applies on the buying side. Since the two tier agreement no central bank — other than the South African and Russian — can buy gold above the official monetary price, which has now been raised, after the two dollar devaluations, to $42.2 an ounce. So the free gold market which is supposed to be governed by the laws of supply and demand is in effect dependent, first, on the supplies made available by Pre toria and, secondly, on the demands coming from com mercial and industrial buyers, from the traditional hoarders in the Middle East and Far East, and from the speculators, American and European, who buy gold legally or illegally just for the rise.

As gold does not bear any interest and is expensive to hold these speculators are usually bold long-term gamblers who are out for a big prcfit of 50 per cent or 100 per cent. Their numbers would be swelled if Mr Nixon agrees to the recent Senate proposal that American citizens should be allowed to purchase gold. This Senate proposal came after my friend Charles Stahl, ed:tor of Green's Commodity Bulletin, had given evidence to a Senate banking committee. It was apparently his idea — as was the idea of the 'two tier' system.

Now that the irrepressible Charles Stahl has suggested also to the Senate banking committee that the two tier system — his brain child — should be abolished it is necessary to take a close look at the litely moves in the monetary world. If central banks were allowed to buy or sell gold in 'the free market they could cause a slump in the price if they elected to take a few profits. They still held some $38,000 million ef the stuff. But the curious thing is that they are unlikely to do so. Although the Americans now regard gold as a commodity rather than as a reserve asset for monetary purposes — except the $10,000 million of geld tiicy hold as a strategic war reserve — they have not won over the rest of the world to their way of thinking. Indeed, the French still hanker after the greater monetary use of gold in spite of the fact that the IMF members agreed in 1967 on the use of a new reserve asset — the SDR (Special Drawing Rights of the IMF). The value of the SDR is expressed in terms of the 1944 dollar, when gold was $35 an ounce, and 9.3 billion SDRs have now been issued.

It cannot be said that the SDRs have gained in popularity. In the confused state of the world's currencies today no one has suggested issuing any more SDRs. Everyone prefers to hang on to their gold. And for a simple reason. First, most central bankers believe in their hearts — if they have any — that gold will go up in price as commercial and hoarding demands increase. Second, if they were to take a huge profit on any gold they sold they would be increasing their money supply and their inflation. Third, if ever the world agrees upon a new monetary system, the monetary gold price would probably have to be doubled to provide backing for the unpopular SDRs. In any event the world is not likely to agree upon a new monetary system to replace the collapsed Bretton Woods system in the foreseeable future. The Group of Twenty Committee under, Jeremy Morse, which was set up in May 1972 tq work out proposals for a new monetary order, has not uttered a word. It has been like an old broody hen sitting on unfertile eggs. It cannot, be blamed because it is beyond the wit of monetary man to devise a system which can cure the American deficit on the balance of payments. This deficit is in part on capital account, in part on trading account. The American government can readily cure the capital deficit, if it has the will, by making its own multinational companies bring back their net earnings to the United States. But it cannot cure its trading deficit — I quote its own official excuse — because of the tariffs and other barriers to its trade erected by fore:gn countries. It blames particularly Japan and the protectionist agricultural policy of the European Common Market. There is therefore a strong lobby in Congress for counter-restrictions on foreign trade such as import quotas or higher tariffs.

It is unusual for the United States to run into a deficit on current trade but this deficit is • now likely to worsen as they import more and more oil to meet their energy shortage. The suppliers of the oil are largely the small developing countries — the Arabs, the Iranians, the Nigerians, the Libyans. Do you suppose that they are anxious to take in more and more dollar paper in payment? The Arabs in particular are the great gold hoarders and they will surely force up the price of gold on the free market. The Arabs are squeezing us, the consumers of oil, and it would be foolish of us not to let them pay more for our gold.

The trading world must therefore carry on with its makeshift floating of currencies for the time being, although the floating may become 'dirtier,' that is, more managed, as troubles arise. This particularly applies to the joint floating of the elite EEC countries which have foolishly tied temselves to the ' snake,' the restricted 21 per cent fluctuation. So for the moment gold is left in the air, which is not a had situation for the 'bulls.'