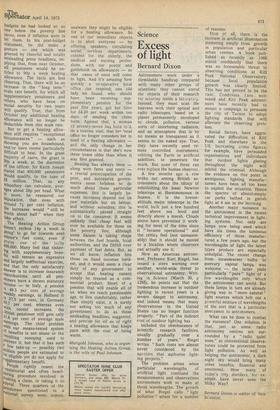 Astronomers work under a formidable handicap compared with many other groups of scientists: they cannot corral the objects of their research for scrutiny inside a lab.matozy. Instead, they must scan the heavens with their optical and radio telescopes, based on a planet permanently enveloped in clouds, pollution, various sorts of interfering radiation, and an atmosphere that is by no means as transparent as it seems to the naked eye. True, they have recently used remote controlled instruments, orbiting the Earth in artificial satellites, to penetrate the murk. But none of these can ever replace the human observer.

A few months ago a row broke out among British astronomers about the idiocy of establishing the Isaac Newton telescope at Herstmonceux in Sussex. It is the lowestaltitude major telescope in the world, built just a few hundred feet above sea level and directly above a marsh. Clouds above have prevented it working for most of the -time since it "became operational" and the critics feel (not unreasonably) that it should be moved to a location where observers can actually use it.

Now an American astronomer, Professor Kurt Riegel, has issued a stern warning over another, world-wide threat to observational astronomy. Writing in Science (March 30, p 1285), he points out that the

tremendous increase in outdoor lighting in recent years is a severe danger to astronomy, and indeed means that many observatories in the United States can no longer function properly. "Part of the indirect cost of outdoor lighting has . . . . included the obsolescence of scientific research facilities, usually gradually over a number of years," Riegel writes. " Such costs are almost never considered by the agencies that authorise lighting projects."

The problem arises when particular wavelengths of artificial light confound the measurements and observations astronomers wish to make at those wavelengths. The growth of what Riegel calls " light pollution " arises for a number of reasons.

First of all, there is the increase in artificial illumination stemming simply from growth in population and particular urban centres. A book published as recently as 1960 stated confidently that there was no foreseeable threat to observing conditions at Kitt Peak National Observatory, because local population growth was clearly limited. This has not proved to be the case. Conditions Eave worsened and Kitt Peak astronomers have recently had to mount a campaign to persuade the city of Tucson to adopt lighting standards that will alleviate the observing problem.

Social factors have aggravated the difficulties at Kitt Peak and elsewhere in the US. Increasing crime figures, for example, have persuaded organisations and individuals that outdoor lights glaring throughout the night will inhibit the criminal. Although the evidence on this point is ambiguous, lighting manufacturers have been all too keen to exploit the situation. Hence the spectre of almost-empty car parks bathed in garish light at 4 am in the 'morning. Another major nuisance to the astronomer is the recent technical improvement in lighting systems. Not only are lamps now being used which have six times the luminous efficiency of those manufactured a few years ago, but the wavelengths of light the latest types produce are especially unhelpful. The recent change from incandescent bulbs to mercury vapour lamps was welcome — the latter yield particularly " pure " light of a few wavelengths only, which the astronomer can avoid. But these lamps in turn are already giving way to "more natural " light sources which belt out a powerful mixture of wavelengths of the sort that is a particular annoyance to astronomers.

What can be done to combat the nuisance? One solution is that, just as some radio

astronomy centres are surrounded by a "radio quiet

zone," so conventional observa tories could be protected from light pollution. As well as helping the astronomer, a dark night sky would bring many other benefits, financial and emotional. How many of today's city dwellers, for example, have never seen the Milky Way?