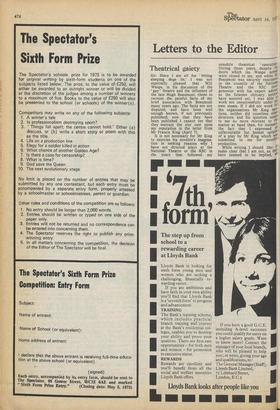 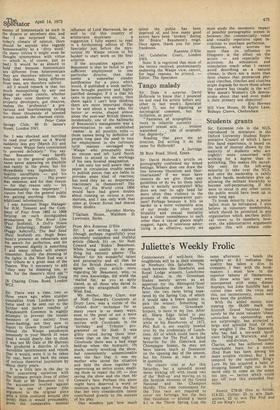 Sir: Since I am all for ' letting sleeping dogs lie,' I was not especially pleased that Will Waspe, in his discussion of the 'gay' theatre and the influence of the late Hugh Beaumont, chose to recount the painful facts of my brief association with Beaumont many years ago. The facts are not disputed, and have been well enough known, if not previously published; now that they have been published I cannot see that they warrant the slur cast upon my reputation in the letter from Mr Francis King (April 7).

During those years, despite Or doors which (as Waspe noted were closed to me, and while g Beaumont was securely ensconce' in the councils of the Nadal Theatre and the RSC (eve generous with his expert adv,ic as the fulsome obituary notice have assured us), I was able t4 work not unsuccessfully under ID. own steam. If I did not work I° the organisations Mr King men tions, neither did countless othe directors, and his question seern to me no more relevant to el matter at hand than, for instance the fact that I expressed .8r, unfavourable but honest opinO, of a play by Mr King which submitted to me for possibl' production. While writing I should like tc make clear that I am not, as have seemed to be implied, 8'

enemy of homosexuals as such in the theatre or anywhere else, and that I am surprised that, in today's climate of opinion, there Should be anyone who regards homosexuality as a 'dirty word.' (In many circles it might even be thought synonymous with virtue — which is, of course, just as bad.) It would be as absurd to hold that because homosexuals are different from heterosexuals they are therefore inferior, as to hold that women, being different from men, are therefore inferior.

All I would remark is that too much monopolising by any one group or select coterie, whether they take over theatres or, as Property developers, gut theatres, makes the ' profession' a precarious and heartbreaking calling for those thousands of talented artists outside the charmed circle.