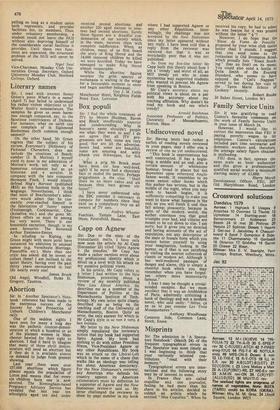 Sir: In ' Another Spectator's Notebook' reference has been made to the enormous success of the Society for the Protection of Unborn Children's Manchester rally.

One of the saddest sights I have seen for many a long day was the pathetic counter-demonstration in which a hundred or so of the plainest women in Manchester bawled for their right to abortion. I find it hard to imagine that many of those shrill demonstrators will need an abortion but if they do it is available almost on demand to judge from present showing.

Last year there were over 157,000 abortions which figure almost equals the population of Luton and means that for every six children born one is now aborted. The Birmingham-based Pregnancy Advisory Service has revealed that last year ten schoolgirls aged ten and under received second abortions and another 220 aged sixteen to nineteen had second abortions. Surely these figures are a dreadful condemnation of our society which, in the main, receives them with complete indifference. When, as children, many of us first heard the story of King Herod and the 14,000 innocent children he killed we were horrified. Today we have managed to make King Herod almost respectable.

While the abortion figures escalate the grim spectre of euthanasia is waiting in the wings for a favourable moment to enter and begin another holocaust.