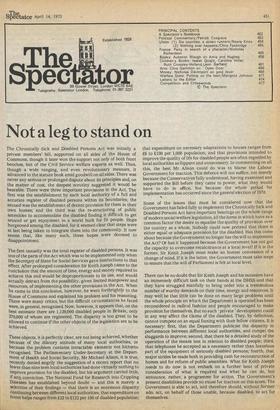 Not a leg to stand on

The Chronically Sick and Disabled Persons Act was initially a private members' bill, supported on all sides of the House of Commons, though it later won the support not only of both front benches, but of the Civil Service welfare experts as well. Thus, though a wide ranging, and even revolutionary measure, it advanced to the statute book amid goodwill on all sides. There was never any serious or prolonged dispute about its principles and, on the matter of cost, the deepest scrutiny suggested it would be bearable. There were three important provisions in the Act. The first was the establishment by each local authority of a full and accurate register of disabled persons within its boundaries; the second was the establishment of decent provision for them in their own homes; and the third was the re-structuring of public amenities to accommodate the disabled finding it difficult to get around or get enjoyment in a world built for fit people. Hope burgeoned among the disabled, for it seemed clear that steps were at last being taken to integrate them into the community. It now seems that, like many such, these hopes were doomed to disappointment.

The first casualty was the total register of disabled persons. It was one of the parts of the Act which was to be implemented only when the secretory of State for Social Services gave instructions to that effect. After prolonged consideration Sir Keith Joseph came to the conclusion that the amount of time, energy and money required to achieve this end would be disproportionate to its use, and would actually detract from the possibility, given limited manpower and resources, of implementing the other provisions in the Act. When he came to this conclusion, however, he went forthrightly to the House of Commons and explained his problem and his reasoning. There were many critics, but the difficult circumstances he faced were, in general, recognised. Now, however, it appears that, on the best estimate there are 1,129,000 disabled people in Britain, only 370,000 of whom are registered. The disparity is too great to be allowed to continue if the other objects of the legislation are to be achieved These objects, it is perfectly clear, are not being achieved, whether because of the dilatory attitude of many local authorities, or because the problem contains intractable elements not hitherto recognised. The Parliamentary Under-Secretary at the Department of Health and Social Security, Mr Michael Alison, it is true, recently denied angrily the suggestion of a recent report that no fewer than nine teen local authorities had done virtually nothing to improve provision for the disabled, but his argument carried little, if any, conviction. The National Fund for Research into Crippling Diseases has established beyond doubt — and this is merely a selection of their findings — that there is an enormous disparity continuing between different local authorities; that expenditure on home helps ranges from £32 to £122 per 100 of disabled population; that expenditure on necessary adaptations to houses ranges from £8 to £100 per 1,000 population; and that provisions intended to improve the quality of life for disabled people are often regarded by local authorities as flippant and unnecessary. In commenting on all. this, the best Mr Alison could do was to blame the Labour Government for inaction. This defence will not suffice, not merely because the Conservatives fully understood, having examined and supported the Bill before they came to power, what they would have to do in office, but because the whole period for implementation has occurred since the general election of 1970.

Some of the issues that must be considered now that the Government has failed fully to implement the Chronically Sick and Disabled Persons Act have important bearings on the whole range of modern social welfare legislation, all the items in which have as a common factor the desire to equalise the quality of provision over the country as a whole. Nobody could now pretend that there is either equal or adequate provision for the disabled. Has this come about because the Government no longer has the will to implement the Act? Or has it happened because the Government has not got the capacity to overcome recalcitrance at a local level? If it is the former, Sir Keith Joseph must make an honest concession of a change of mind. If it is the latter, the Government must take steps to ensure that the will of Parliament is felt at local level.

There can be no doubt that Sir Keith Joseph and his ministers have an immensely difficult task on their hands at the DHSS and that they have struggled manfully to bring order into a tremendous number of worthy demands on their time, energy and resources. It may well be that little can be done on many large problems until the whole principle on which the Department is operated has been reconsidered in radical fashion and people encouraged to make provision for themselves. But no such 'private 'development could in any way affect the claims of the disabled. They, by definition, cannot compete on an equal footing with their fellow citizens. It is necessary: first, that the Department publicise the disparity in performance between different local authorities, and compel the sluggards to improve; second, that there be a detailed study of the operation of the means test in relation to disabled people; third, that telephones be accepted as a necessary rather than luxurious part of the equipment of seriously disabled persons; fourth, that major strides be made both in providing cash for reconstruction of homes and for reform of public amenities. What Sir Keith Joseph needs to do now is not embark on a further bout of private consideration of what is required and what he can do, but announce, rather, a programme for action. The Government's present disabilities provide no exuse for inaction on this score. The Government is able to act, and therefore should, without further ado, act, on behalf of those unable, because disabled, to act for themselves.