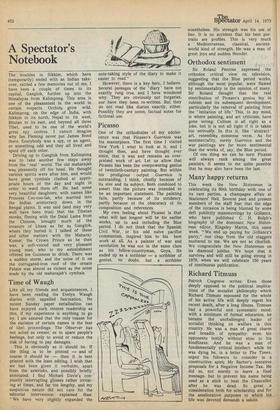 The troubles in Sikkim, which have (temporarily) ended with an Indian takeover, rattled a few memories out of me. I have been a couple of times to its capital, Gangtok, further up into the Himalayas from Kalimpong. This area is one of the pleasantest in the world in certain respects. Orchids grow wild. Kalimpong, on the edge of India, with Sikkim to its north, Nepal to its west, Bhutan to its east, and beyond all three Tibet, used to be one of the world's great spy centres. I cannot imagine why Ian Fleming never put James Bond there. Everybody was a spy, or an agent, or something odd and they all lived and spied off each other. Driving up to Gangtok from Kalimpong was to take another few steps away from the ' real' world. The old maharajah was pleasantly off his head. He thought various spirits were after him, and would have great cymbals clashed at appropriate hours of the day and night in order to ward them off. He had some very beautiful daughters, with names like Princess Coo-coo-lah, who married into the Indian aristocracy down in the Bengal plains. It was said (and may very well have been true) that the Tibetan monks, fleeing with the Dalai Lama from the Chinese, brought much of the treasure of Lhasa as far as Gangtok, where they buried it. I talked of these and other matters with the MaharajKumar, the Crown Prince as he then was, a soft-voiced and very pleasant young man, who to my astonishment offered me Guinness to drink. There was a sudden storm, and the noise of it on the corrugated-iron roof of the ornate Palace was almost as violent as the noise made by the old maharajah's cymbals.

Like all my friends and acquaintances, I have been reading the Evelyn Waugh diaries with appalled fascination. No recent Sunday paper serialisation can have enjoyed such intense readership as this, if my experience is anything to go by. I am assured that the only reason for the excision of certain names is the fear of libel proceedings. The Observer has not acted as censor, or to spare people's feelings, but only to avoid or reduce the risk of having to pay damages.

This is obviously as it should be. If the thing is to be printed — and of course it should be — then it is best printed with the least editing. I wish that we had been given it verbatim, apart from the asterisks, and possibly briefly annotated. I find Michael Davie's constantly interrupting glosses rather irritating at times, and far too lengthy, and my suspicious nature did not care for the editorial intervention explained thus: "We have very slightly expanded the note-taking style of the diary to make it easier to read."

However, there is a key here, I believe. Several passages of the ' diary ' have not exactly rung true, and I have wondered why. They are obviously not forgeries, nor have they been re-written. But they do not read like diaries exactly, either. Possibly they are notes, factual notes for fictional use.

One of the orthodoxies of my adolescence was that Picasso's Guernica was his masterpiece. The first time I visited New York I went to look at it, and I thought then, and have thought ever since, that it was and remains an overpraised work of art. Let us allow that Picasso has been the overpowering genius of twentieth-century painting. But within his prodigious output .Guernica is outstanding, I think, chiefly because of its size and its subject. Both combined to assert that the picture was intended to be an important statement. The painting fails, partly because of its stridency, partly because of the obscuracy of its composition and references.

My own feeling about Picasso is that what will last longest will be his earlier works, up to and including the Blue period. I do not think that the Spanish Civil War, or his odd naive pacifist communism, inspired him to his best work at all. As a painter of war and revolution he was not in the same class as his fellow-countryman, Goya. He ended up as a scribbler — a scribbler of genius, no doubt, but a scribbler nonetheless. His strength was his use of line. It is no accident that his best portraits are profiles. This is very much a Mediterranean, classical, ancientworld kind of strength. He was a man of great joys and sudden thunder.

Sir Roland Penrose expressed the orthodox critical view on television, suggesting that the Blue period works, although the most popular, were flawed by sentimentality in the opinion, of many. Sir Roland thought that the real contribution of Picasso's genius lay in cubism and its subsequent development, particularly the removal of painting from the 'imitation of life.' This, to my mind, is where painting, and art criticism, have gone wrong. Cubism is all right as a joke, but it is not all right if it is taken too seriously. In this it, like ' abstract ' art, resembles nonsense verse. As for sentimentality, surely Guernica and the war paintings are far more sentimental than the works of, say, the Blue period.

Of one thing we can be sure: Picasso will always rank among the great painters. It seems to me quite possible that he may also have been the last.

This week the New Statesman is celebrating its 60th birthday with one of its rare parties, a champagne affair at Stationers' Hall, Several past and present members of the staff fear that the edge of the occasion is being blunted by some deft publicity manoeuvrings by Gollancz, who have published C. H. Rolph's biography of the dominant New Statesman editor, Kingsley Martin, this same week. "We end up paying for Gollancz's party," one chap from the old staggers muttered to me. We are not so churlish. We congratulate the New Statesman on its diamond jubilee. We hope that it survives and will still be going strong in 1978, when we will celebrate 150 years of continuous publication.

Patrick Cosgrave writes: Even those deeply opposed to the political implications of the socialist philosophy which Richard Titmuss espoused for the whole of his active life will deeply regret his recent death, after a long illness. Titmuss had a powerful and systematic mind: with a minimum of formal education, he became the unchallenged leader of socialist thinking on welfare in this country. He was a man of great charm and breadth of sympathy: even his opponents testify without stint to his kindliness. And he was a man of fundamentally critical intellect: while he was dying he, in a letter to The Times, urged his folowers to consider in a constructive spirit Mr Barber's tentative proposals for a Negative Income Tax. He did so, not merely to leave a final message, but to prevent his name being used as a stick to beat the Chancellor after he was dead, So great a consideration both for scholarship and for the ameliorative purposes to which his life was devoted demands a salute.