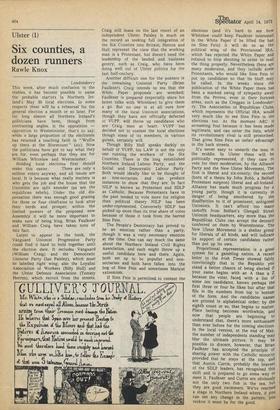 Londonderry This week, after much confusion in the stables, it has become possible to name the probable starters in Northern Ireland's May 30 local elections. In some respects these will be a rehearsal for toe general election a month or so later. For toc long almost all Northern Ireland's politicians have been, though from contrasting angles, in the opposition — opposition to Westminister, that's to say; while a large proportion of the electorate has retained a touching faith in " Wullie up there at the Stormount " (sic). Now the politicians have got to say what they are for, even perhaps that they are for William Whitelaw and Westminster.

Holding local elections first should make this easier. There are only a million voters anyway, and all issues are local. It is because what really matters is who gets the job and the house that the Unionists are split asunder (as are the republican rebels). Under the old dispensation there was enough good grazing for three or four chieftains to look after their herds and prosper; within the limited powers of the proposed new Assembly it will be more important to make sure of being king. Brian Faulkner and William Craig have taken note of this fact.

Latest to appear in the book, the Vanguard Unionist Progressive Party could find it hard to hold together until the election date. It includes Vanguard (William Craig) and the Democratic Unionist Party (Ian Paisley), which must be labelled right wing; also the Loyalist Association of Workers (Billy Hull) and the Ulster Defence Association (Tommy Herron), which recruit from the streets. Craig still leans on the last resort of an independent Ulster; Paisley is much on the record as seeking full integration of the Six Counties into Britain; Herron and Hull represent the view that the working man is a Protestant, but doesn't need the leadership of the landed and business gentry, such as Craig, who have been doing well out of Ulster politics for the last half-century.

Another difficult one for the punters is the remaining Unionist Party (Brian Faulkner). Craig intends to see that the White Paper proposals are wrecked; Faulkner is prepared (especially since his latest talks with Whitelaw) to give them a go. But no one is at all sure how many of the local Unionist associations, though they have not officially defected o VUPP, will throw up candidates w'ho are Craig men at heart. VUPP has decided not to contest the local elections though some of its members, in various guises, certainly will.

Though Billy Hull speaks darkly on behalf of VUPP, his LAW is not the only one running the workers of the Six Counties. There is the long established Northern Ireland Labour Party, and the Social and Democratic Labour Party.' Both would ideally like to be thought of as non-sectarian, and can produce Instances to show that they are. In fact NILP is known as Protestant and SDLP as Catholic. Because Protestants have in the past tended to vote more for religion than political theory NILP has been under-represented. Conversely SDLP has picked up more than its true share of votes because of those it took from the barred Sinn Fein.

The People's Democracy has proved to be an emotion rather than a party, though it was a very necessary emotion at the time. One can say much the same about the Northern Ireland Civil Rights Association, and each might throw up a useful candidate here and there. Again, both set up to be populist and nonsectarian and both have fallen into the bog of Sinn Fein and sometimes Marxist extremism.

If Sinn Fein is permitted to contest the elections (and it's hard to see how Whitelaw could keep Faulkner interested in the White Paper if he lifted the ban on Sinn Fein) it will do so as the political wing of the Provisional IRA, which has rejected the White Paper and refused to stop shooting in order to read the thing properly. Nevertheless there are many moderates, and they include some Protestants, who would like Sinn Fein to put up candidates so that its bluff may be called. In the weeks since the publication of the White Paper there has been a marked swing of sympathy away from the Provos, even in t'neir fortress areas, such as the Creggan in Londonderry. The Association of Republican Clubs, which represents the Official IRA, would very much like to see Sinn Fein in the elections too. At the moment ARC is screaming foul because it has been made legitimate, and can enter the lists, while its revolutionary rival is still proscribed. That gives Sinn Fein an unfair advantage in the back streets.

It's never easy to unearth the men in the middle. In Ulster these will be politically represented, if they care to vote for their moderation, by the Alliance Party and the New Ulster Movement. The first is liberal and six-county; the second (born of a thesis by John Robb, a Belfast Protestant surgeon) liberal and all-Ireland. Alliance has made much progress for a young party, though it is currently in danger of being smothered by the disaffection to it of prominent, unbigoted Unionists. It can't afford too many castoffs from Belfast's Glengall Street Unionist headquarters, any more than the Republican Clubs can accept the decency conferred on them by Westmlnister. The New Ulster Movement is a shelter group for liberals of all kinds, and will indicate its support of certain candidates rather than put up its own.

Proportional representation is a great system for a gambling nation. A recent letter to the Irish Times showed fairly convincingly that in the Republic yoU stand a better chance of being elected if your name begins with an A than a Z because the voter, faced with a list of some ten candidates, knows perhaps the first three or four he likes but after that fills in the numbers from top to bottom of the form. And the candidates names are printed in alphabetical order; by The eighth count or so, that begins to matter. Place betting becomes worthwhile, and now that people are beginning to understand that, there's more enthusiasm than ever before for the coming elections. In the local version, at the end of May, the number of independents standing 'may blur the ultimate picture. It may be possible to discern, however, that Brian Faulkner has accepted the principle of sharing power with the Catholic minority provided that he stays at the top, and that Austin Currie, probably the bravest of ene SDLP leaders, has recognised this shift and is prepared to go some way to meet it, Faulkner and Currie are obviouslY not the only two fish in the sea, but they are good swimmers. We've reached a stage in Northern Ireland where, if yOU can see any change in the pattern, You reckon it must be for the good.