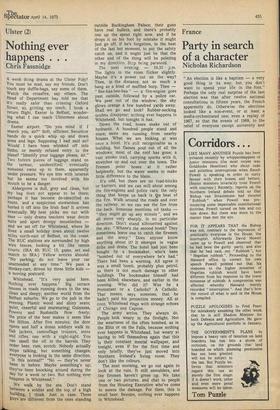 LIKE MANY ANOTHER Puzzle has been irritated recently by whippersnappers of junior ministers (the most recent was Goldilocks Heseltine) who shout rude and pointless interruptions when Enoch Powell is speaking in order to curry favour with their bosses and betters. (Senior ministers invariably treat Powell with courtesy.) Recently, reports on the Northern Ireland debate told us that Bishop van Straubenzee had shouted " Rubbish " when Powell was pronouncing some impeccable constitutional doctrine. Powell turned on him and cut him down. But there was more to the matter than met the eye.

FOR IT APPEARS THAT the Bishop was not, contrary to the impression of practically everyone in the House, the interrupter. Afterwards David Howell came up to Powell and observed that he had been the guilty party, and also that he had said, not "Rubbish ", but "Hegelian rubbish ". Proceeding to the Hansard office to correct his own speech Powell pointed out that his response to the higher nonsense of Hegelian rubbish would have been different from his response to the lower nonsense of rubbish. A compromise was effected whereby Hansard merely recorded 'interruption ". And that's how the record of what is said in the House is compiled.

PUZZLE APOLOGISES to Fred Peart for mistakenly assuming the other week that he is still Shadow Minister for both Defence and Agriculture. He gave up the Agricultural portfolio in January.

THE GOVERNMENT'S PLANS to 'impose a heavy rate of taxation on land hoarders has run into a storm of criticism, on the grounds that land hoarded on which planning permission has not been granted will not be subject to the tax. But Puzzle believes that ministers regard this tax as merely the first stage: if it doesn't work, other and even more penal measures will be taken.